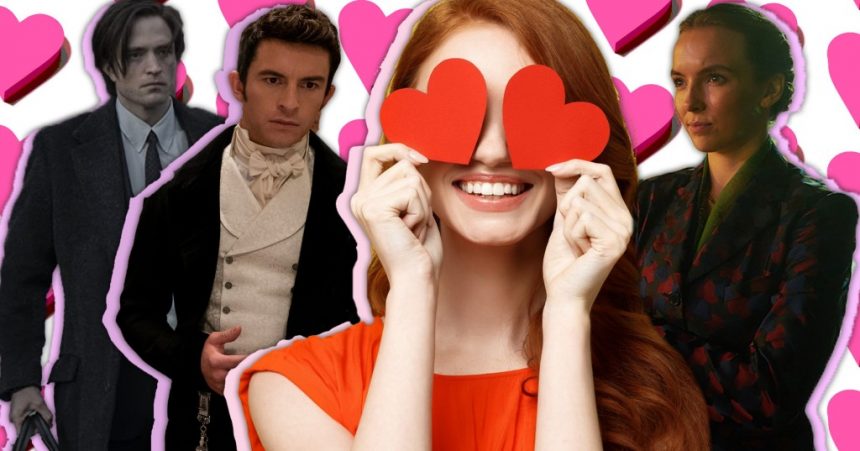 There are some seriously crush-worthy characters on our screens right now (Pictures: PA/Netflix/Warner Bros/Getty)

We’ve all had celebrity crushes, with some swooning over Colin Firth as Mr Darcy and others finding more niche love interests, like those who get hot under the collar for Jim Carrey as The Grinch.

Regardless of how green and hairy these crushes may be, it’s perfectly normal to feel a passing desire for someone you’ve never met – even if they’re not actually a real person.

The problem comes when you obsess over fictional characters or hold real-world partners to unrealistic standards based on their behaviour.

Some people may ignore relationships in favour of a parasocial one, preferring the fantasy they see on screen to the effort and time it takes to build connections in person.

Relationship Psychotherapist Charisse Cooke tells Metro.co.uk: ‘Fictional characters offer us an insight into their thoughts and feelings in ways we just don’t get to with our real-life friends and partners.

‘Fictional characters are also playing very specific roles to help with the storytelling and fit into very specific archetypes that we as humans are trained to either like or dislike.

‘In certain instances, characters are the main love protagonists in films or series, and their sole purpose is to appear as desirable and attractive as possible. This will impact the other characters and also the audience.’

That explains why everyone we know is crushing on Anthony Bridgerton right now, the nobleman in Netflix’s hit period drama played by Jonathan Bailey. Not only does he feature in steamy scenes that tantalise viewers, his personality on screen appears to be specifically curated to be attractive.

We all have celebrity crushes, it’s when they turn into parasocial relationships that things get unhealthy (Picture: Getty Images/iStockphoto)

If you find yourself daydreaming about a character like that, it can be helpful to think of what’s drawing you in.

‘Noticing the characteristics of who we have a crush on can help us learn about what some of our deep desires and dreams actually are,’ says Charisse.

‘There may be a romantic in each of us that we try to deny in real life. Or we may have hopes and aspirations in other areas that we don’t realise until we form a crush.’

Using fictional crushes to inform our choices in real life is a healthy way to channel desire. But it’s important to recognise when you’re veering into a parasocial relationship.

Tony Robbins said ‘energy flows where attention goes’. Regardless of how you feel about the motivational speaker’s teachings, it’s a good mantra to keep in mind.

If you’re focusing on fantasising about Robert Pattinson’s Batman sweeping you off your feet, for example, you’ll naturally begin to ignore connections in real life that could actually come to fruition.

Try to avoid behaviours that signal more than a fleeting fancy, like creating fan fiction, trying to make contact with the actor, or withdrawing from social situations in favour of the on-screen world.

According to Charisse, it can be beneficial to give yourself a reality check when things get confusing.

She says: ‘Fictional characters can be unrealistic in their portrayal and in their character formulation.

‘Remembering that humans have both good and bad in them, and everyone has their flaws and imperfections, can help us stay grounded in reality.’

What to do if you've become 'enmeshed' in a relationship

Take the wry wit of Villanelle, the raw power of Thor, or the fun yet chaotic energy of Harley Quinn. If they’re the qualities you’re looking for in a partner, use your fictional crush to your advantage and prioritise them when you’re dating.

Charisse adds: ‘You can also share who you have a crush on a date. It can be fun to talk about your dream character, and say why they are so appealing, as a way of engaging your date and also start an interesting conversation about what you are both looking for.’

Perhaps play down the fact you’ve dreamt of Edward Cullen every night since you first read Twilight as a teenager – do chat about the books and the things that drew you to the character.

It’s easy to slip into the fantasy worlds we see in media, but waiting for a vampire or Regency Viscount to love you back is an exercise in futility.

Swoon away as you watch, just don’t neglect reality as a result.

MORE : Why high-powered people like being dominated in bed

MORE : How to spring clean your wardrobe