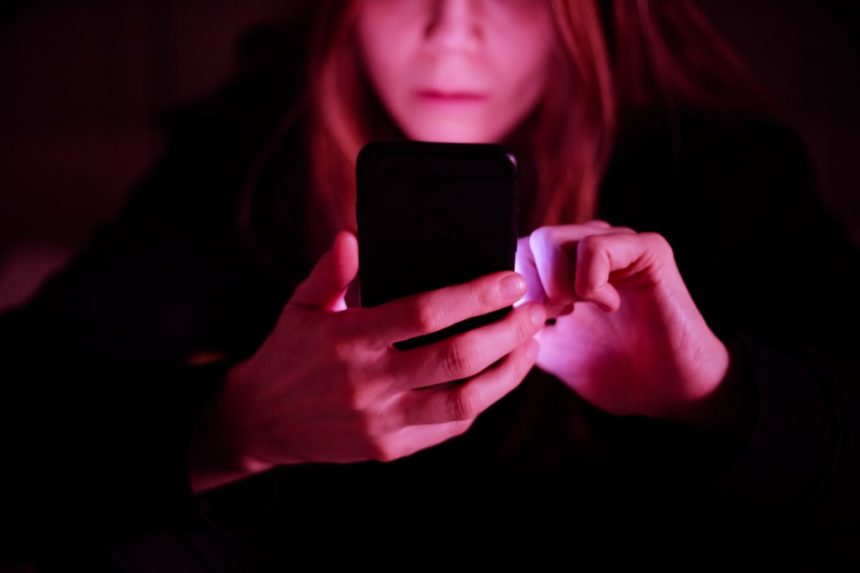 My experiences have left me jaded (Picture: Getty Images)

‘Do you have home insurance? Because you’ll need it for when I smash your back doors in!’

At first I laughed out of shock at the chat up line I’d just received. Then I sent the message round to some of my friends to see if they were as horrified as me (they were), before blocking and reporting him.

This is indicative of the sad state of affairs of misogyny in online dating.

Towards the end of last year I took my first steps into the world of dating apps. I finally felt ready after just over three years of being single, having picked myself up after a serious relationship had ended quite badly.

I hadn’t been single for such a long period of time before and had needed some of that clichéd time on my own, but with lockdowns coming to an end I was ready. Everyone said that apps were the way to do it now.

Although friends had warned me about the nature of the comments that might come my way, I was not ready for the sheer volume of problematic, misogynistic men on these platforms.

There are some who willingly fly their misogynistic flag via their profile – normally in list format – outlining what they are looking for in a woman; ‘Give me your superlike but only if you’re smart and not [a] 200kg “food lover” or another type of whale’. It’s easy enough to give those people the swerve.

But you see the true scale of the problem when, so often, you match with someone and the opening pitch is often a crude, objectifying comment. It began to seem more custom to be asked for a sexual favour before someone even said hello.

‘My gosh, I absolutely wouldn’t mind burying my face between those two,’ one message read. I rolled my eyes and blocked him.

I did not harbour expectations of love at first swipe, but when did being treated with dignity and respect become too much of a demand?

This is far from me being prudish – some dating apps are consciously geared towards ‘hook-ups’ and two consenting adults are free to enjoy them however they see fit. But starting a conversation with such comments is indicative of a far more insidious problem, because these incidents are far from rare.

So, after two months experiencing this, I decided to share a little about my experience on Twitter. I wanted to feel less alone as a recipient of the messages and to connect with other women.

Before long, I was inundated with similar stories. There was a lot of highly sexual content about sex acts and people shared what men had referred to them as. One woman was called a whale, one a pig, one a dog.

According to the Pew Research Center, 48% of dating app users say that receiving sexually explicit messages or images they did not ask for is very common.

Maybe these men feel protected by the veiled nature of dating apps, and they’d think twice about saying such things to my face. But that matters little. That they feel comfortable saying it in any forum means that they hold these views, and these views will inform their behaviour and interactions with women.

This is echoed by the emerging data around the troubling relationship between dating apps and sexual violence. Recent figures from a sexual health clinic run by Solace Women’s Aid in London found that 25% of referrals were from survivors who had met the perpetrator on a dating app or website.

Not all misogynists end up committing acts of sexual violence, of course, but every non-consensual comment they make has the capacity to cause great harm.

One in four women in England and Wales have experienced sexual assault since the age of 16. Survivors carry these experiences with them for life. They can prevent you from even contemplating dating or relationships.

Some women may see dating apps as a safer space because, in theory, the risks of sexual violence should be lessened. You can suss people out before meeting face to face.

Imagine then, that their first experience of dating for some years is to receive one of the above comments. I suspect these men fail to comprehend the damage a triggering comment might have.

What should, or could, be done about this though?

First, the onus cannot be on the recipients of these messages. I’ve read those think pieces that tell us ‘women know the risks’, or that they should post ‘less provocative’ profile photos. It doesn’t dignify a response.

There is definite room for the tech companies to improve their processes – and they have the resources to do it (the global dating market is expected to be worth over $11billion by 2028).

The most well-known apps have reporting structures in place but there are concerns – even from industry executives and insiders – over how well these complaints are handled. There are also significant privacy and security issues too – dating apps are seen as a ‘window of opportunity’ for online stalking and harassment.

If someone shows you the misogynistic ‘pick-up line’ they’ve used on an app, challenge them

It happened to me when I was found and contacted via Instagram when I did not reply to a message in what one man thought was an appropriate amount of time.

I didn’t respond to this, I just blocked him, but this made me feel horrible. He could see my whole life and he knew who I was. My Instagram has limited things on it as it is public, but I felt really unsafe.

For too long, we’ve had misogyny ingrained into our culture and institutions – the Home Secretary says the Government will even oppose the Lords amendment to the Police, Crime, Sentencing and Courts bill that would make misogyny a hate crime in England and Wales.

Misogynistic perceptions about women still pervade our courtrooms in sexual abuse cases, they persist in workplaces, and they are rife in mainstream culture and how we talk about women. We need a seismic shift – that’s the real answer.

But on a more individual scale, all men have a role to play. It means having conversations with each other and calling out this behaviour.

If someone shows you the misogynistic ‘pick-up line’ they’ve used on an app, challenge them, and ask them to consider how it might affect someone. It might not be ‘all men’ but all men have a collective responsibility to act.

I usually just block men if they are misogynistic towards me and try not to get into altercations on the app. But I have had conversations with people I know about what is acceptable (and not), and I’ve called out a friend of a friend who thought his deeply misogynistic chat-up lines were funny.

Coming from someone they know, you hope it will resonate with them and change their behaviour.

Couple save on stunning bathroom transformation with YouTube DIY tutorials

Some dating apps still linger on my phone but my experiences have left me jaded.

One well-known app claims it is ‘designed to be deleted’ but, in my case, that’ll come from utter frustration rather than actually finding someone.

Maybe it’s time to give speed dating a go.

MORE : We must call out misogyny in all its forms to protect all women, everywhere

MORE : We should all be worried that Dominic Raab can’t define misogyny


‘He’s always there for me but seems to be emotionally unsure – where is this going?’