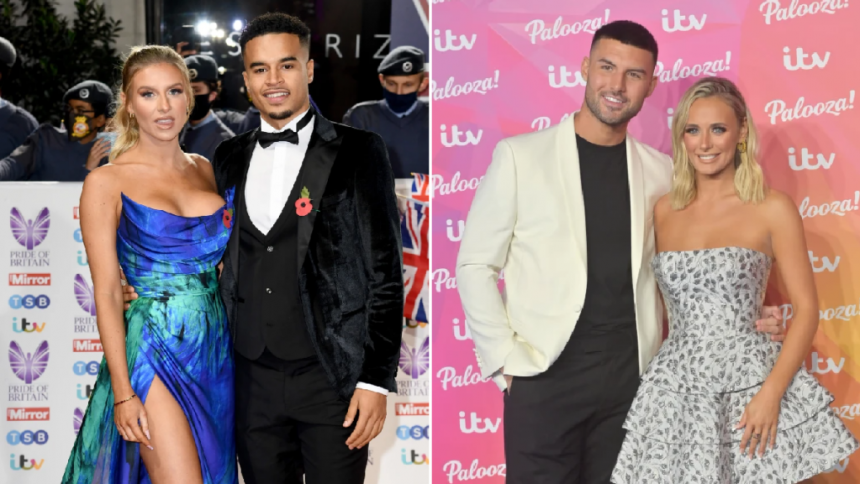 Does love survive off the island? (Picture: Samir Hussein/WireImage/Gareth Cattermole/Getty)

Amid tears, heartache, dumpings and drama, Love Island has certainly lived up to its name over the last few years.

The ITV2 series has created plenty of couples – some of whom have stood the test of time, moved in, got engaged, married and even welcomed children together.

From Molly-Mae and Tommy, Camilla and Jamie, OG’s Cara and Nathan to Jess and Dom – it’s nice to know that not all Love Island couples call it quits after a few months.

As the 2022 series (that’s season eight, by the way) kicks off, let’s take a look back at the Love Island couples still going strong.

The full list of Love Island couples who are still together

Millie Court and Liam Reardon (aka MilLiam) have kept the good times going since winning the show’s seventh series.

And in November 2021, it was revealed the pair had bought a pad together in Essex.

Talking on Capital South Wales about their plans to move in together, Liam said: ‘Now we’ve come out and we’ve spent five days apart but you realise that you don’t want to be apart. I think we’re going to be so busy with work that we want to have our own home to go back to together.’

He added: ‘I love Wales, I love where I’m from. But I’m going to move up to Essex, be with Millie and see what Essex is like and venture off from the valleys.’

Despite recent split rumours, it appears the couple are still an item as of May 2022.

Despite their many highs and lows – and their lows saw thousands of complaints – Faye Winter is still going to bed every night with her Teddy (Soares) bear.

The tumultuous duo are still together, and bought a house of their own together in mid-November 2021.

Chloe and Toby have moved in (Picture: Joe Maher/Getty Images)

Hilarious 2021 runners-up Chloe Burrows and Toby Amorolaran are still together – despite also facing rumours of a split.

Chloe and Toby officially moved in together last year on November 15.

In an Instagram post, the loved-up couple were all smiles, as they posed on their kitchen counter with a glass of champagne. No better way to celebrate than with a bottle of bubbly!

The star also shared the same picture on Twitter and captioned the post: ‘Finally moved in with my babes, life is sweet x.’

And in April 2022, they quickly squashed rumours of a rift in their relationship by posting a sweet Instagram snap together.

Finn Tapp and Paige Turley won the first ever winter series of Love Island (series six) and split the £50,000 prize money between them.

The couple moved in together during lockdown in 2020, and are still living together in a Manchester flat.

They regularly share updates together on Instagram and have even teased ‘big wedding plans’ for the future.

Callum and Molly are still together (Picture: Karwai Tang/WireImage)

This couple has gone on to prove that bad beginnings don’t always jinx the future of the relationship.

Callum Jones and Molly Smith, from series six in 2022, first coupled up in a dramatic Casa Amour episode, prompting Callum to dump Shaughna Phillips upon his return to the main villa.

Another couple who paired up after 2020’s Casa Amor episode, Nas Majeed had originally been paired with Demi Jones but shocked viewers when he went with Eva Zapico.

It was a gamble that paid off, though, as the pair are still happily together two years on.

Nas and Eva regularly share funny short sketches on their social media pages, and recently shared a vlog from their getaway to Paris.

Possibly one of the most famous pairings to come out of Love Island is Tommy Fury and Molly-Mae Hague.

The influencer couple came second in the fifth series of the show, which aired in summer 2019.

Molly-Mae regularly appears at Tommy Fury’s boxing matches, and the pair share loved-up updates with their fans on social media.

The couple first moved in together to a swanky Manchester pad, which was unfortunately burgled in October 2021. The pair have since moved into a £4 million mansion.

Last year, the ever-romantic Tommy hinted that a proposal is ‘sooner than you’d think’.

Lucie Donlan from Love Island series five and Luke Mabbott from series six might not have appeared on the same series, but they’re on the same page when it comes to their relationship.

The happy pair met in July 2020, it’s been suggested – while Lucie revealed that she first messaged Luke on social media.

Speaking to The Sun, she said: ‘It’s like a dream come true, whenever we go out people think it’s Bieber.

‘I always fancied him and when I saw he was single, I slid into his DMs. When you like someone you’ve just got to go for it. We went for a picnic.’

Sharing a video on Instagram, Luke reciprocated, writing: ‘2020 has been a very strange year with its ups and downs. I’ve been lucky enough to meet my bestfriend and soul mate! Many more adventures with you in 2021.’

The happy couple got engaged in December 2021, which means a Love Island wedding is on the cards.

Alex and Olivia were the first Love Islanders to get married (Picture: Brett Cove/SOPA Images/LightRocket via Getty Images)

Speaking of weddings… Alex Bowen and Olivia (née Buckland) are one of the show’s biggest success stories.

The couple from series two, which aired back in 2016, were the first-ever Love Islanders to make it from the island all the way down the aisle.

Alex and Olivia wed in 2018 and moved to a five-bedroom property in the countryside, the renovations of which they continually shared with fans on Instagram.

Back in 2021, they revealed plans to try for a baby when the ongoing coronavirus pandemic is over.

And happily, Olivia is now pregnant with the couple’s first child, who is expected to arrive sometime in June 2022.

Another couple to tie the knot were Cara De La Hoyde and Nathan Massey, aka the winners of Love Island series two in 2015.

The couple wed in a romantic ceremony in Canterbury, Kent in 2018, three years after winning their series.

They share two children together, son Freddie and daughter Delilah.

Dom and Jess got married a year after taking part in the 2017 series (Picture: GOR/GC Images)

Jess Shears and Dom Lever met on series three of Love Island in 2017, and married the following year in 2018 on the Greek island of Mykonos.

In 2019, the couple welcomed a son, Presley, and in 2022 it was announced that they are expecting their second child.

Last but not least are Camilla Thurlow and Jamie Jewitt, who also met on the third series of Love Island.

This couple welcomed a baby girl named Nell in October 2020, and officially tied the knot in September 2021. Baby number two is on the way, with Camilla due sometime in 2022.

MORE : Love Island return date finally confirmed and it is literally around the corner

MORE : Laura Whitmore hits back at former Love Island contestant who says she only got TV presenter job because of Iain Stirling

I’m looking for the man of my dreams – are you the one?