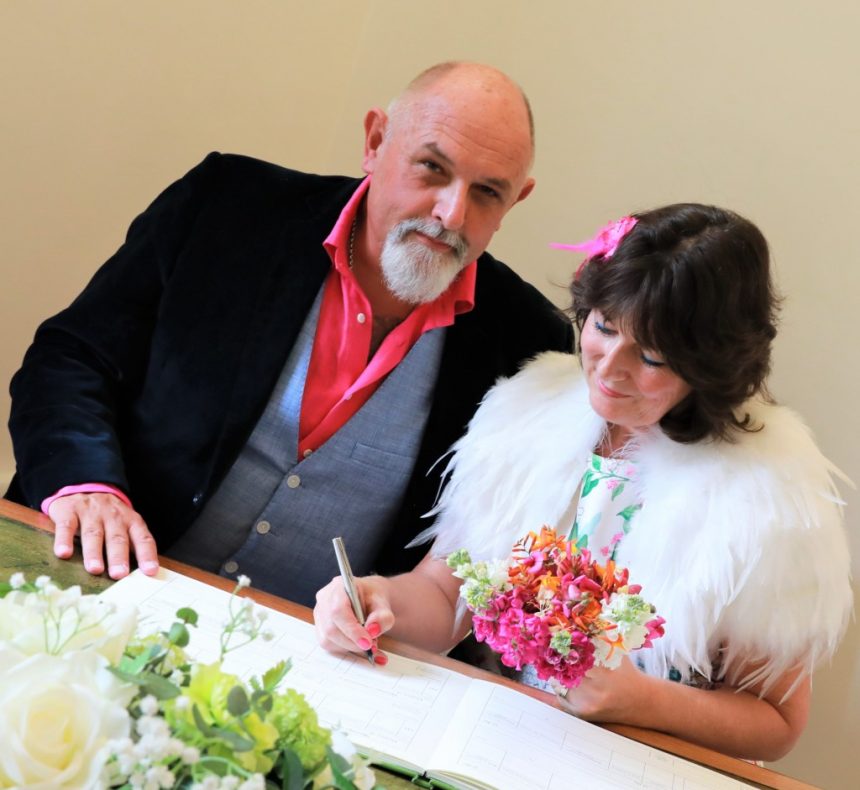 After a few months of regrouping mentally, I decided to dip my toe into the unpredictable waters of online dating, in December of that year.

Initially, I was really excited by the whole experience. However, it soon emerged that people online sometimes pretend to be something they are not.

For example, two of the people I met were smokers (having specified otherwise), one was also a very heavy drinker (having said ‘light drinker’), and another lied about his age.

After a few false starts, I was beginning to wonder if this was going to work for me.

I was on the verge of giving up on dating when, for some reason, the algorithm on the site I was using kept on showing me one particular profile.

I am not sure why I was drawn to it, as it was a slightly awkward, childlike, unsmiling ‘to camera’ photo (I was later amused to find that it was taken by his ex wife in an attempt to help him move on).

But, for whatever reason, I was intrigued.

John was 59, covered in tattoos and a semi-retired accountant, who also ran meditation sessions.

We’d been messaging for a few days when I felt spurred to action and spontaneously rang and suggested a pub I knew, which was local to him. He said he’d be free within the hour.

We met at 2pm. Straightaway, John seemed very different to anyone I had dated before. Both physically and in the way he spoke. He was very matter of fact.

A couple of hours in and things were going swimmingly (Picture: John Moore)

I noticed that he had a long sleeved jacket on and having been warned about the tattoos in his profile (‘if you’re not into tattoos there’s no point in reading on’), I was amused to see no evidence.

After about an hour it was stifling in the pub and I said ‘why don’t you take your jacket off?’ and was quite surprised, after the forthright statement on his profile, for him to turn bashful and say, ‘but you’ll see my tattoos’. I laughed and reassured him.

Despite not being my usual type, he appeared to be a sweet soul.

When we met for that first date, I now know that John also felt that I was not his usual ‘fayre’. Since his divorce he had found himself drawn to high maintenance blonde ‘mums that lunch’ and I couldn’t be further from that stereotype!

However, despite our reservations we sat down with our respective pints and started chatting. It was easy, it was fun and the time flew. I particularly liked that his second pint was orange squash. Yay! Finally someone who appeared to be honest.

I decided to start as I meant to go on, so when he said he didn’t want anything from the bar menu, rather than act demure, I went ahead and ordered some hot snacks. He looked bemused.

The way I saw it, meeting someone like this – with no preconceptions – was my chance to be more me, so I ordered sweet potato chips and happily scoffed the lot!

A couple of hours in and things were going swimmingly. The time seemed to fly, we were talking nonstop, learning about each other’s pasts. Then, John mentioned that he had his 60th birthday party coming up a week later.

‘Would you like to come?’ he asked. Smiling, I enquired, ’in what capacity?’ and he immediately came back to me, as if it was obvious. As his girlfriend. Wow! This guy moves fast!

Heading back to his house, I had no idea what to expect (Picture: John Moore)

But I liked his candour and straight talking, no nonsense approach. Well, why not, I thought. I said that if we were still seeing each other then, yes, I’d love to come.

He then asked if I would go shopping to help him choose an outfit the following day. And said we could have a coffee and cake while we were at it. Sounded perfect.

We carried on talking. And by 5pm it was getting to ‘decision time’. Were we going to end it here and meet up again the next day? Or was it going to carry on?

He asked if I wanted to go to the local folk club with him. I said yes and he offered to make me dinner before the gig, since he only lived up the road. Bless his cotton socks.

Heading back to his house, I had no idea what to expect – and I am not a fussy eater so I was going to be happy with a sandwich. But no, Hello Fresh was unpacked and I was given a choice of dishes! I was very amused to be asked what ‘topping and tailing’ green beans was.

Here was a guy trying his best to fend for himself, being relatively newly single. He was showing vulnerability, which appealed.

The gig was duly attended, but not before a tentative kiss in his living room. Oh my, that released the floodgates of passion.

I am almost embarrassed to return to that music venue now as I now realise that our public displays of affection must have been pretty obvious. I am surprised no one politely asked us to get a room.

I decided it would be too forward to stay the night but with a promise of a shopping trip early the next day, I drove home happily with a smile and a couple of happy tears streaking down my face. Were my online dating days over?

The next day, after a successful shopping trip, I did stay the night. And the following week, I attended his 60th, as his girlfriend. But not before being introduced to his whole family on the week leading up, including an ‘interview’ by his ex wife on day four.

It was a great party. I loved meeting all his friends and it felt so natural. We had spent everyday together since we met on that first day – and we’ve been almost inseparable ever since. What a whirlwind.

And, in case you are waiting for a nasty twist in the tale, there is a happy ending: We got married on August 16th, 2019.

It turns out that online dating isn’t so bad after all, if you persevere and wait for the right person.

Thank goodness I was bold and arranged that first date.

You can find Helen’s podcast here

MORE : My date was so obsessed with Kate Beckinsale that he kept calling me by her name


Everything you need to know about dating a Taurus