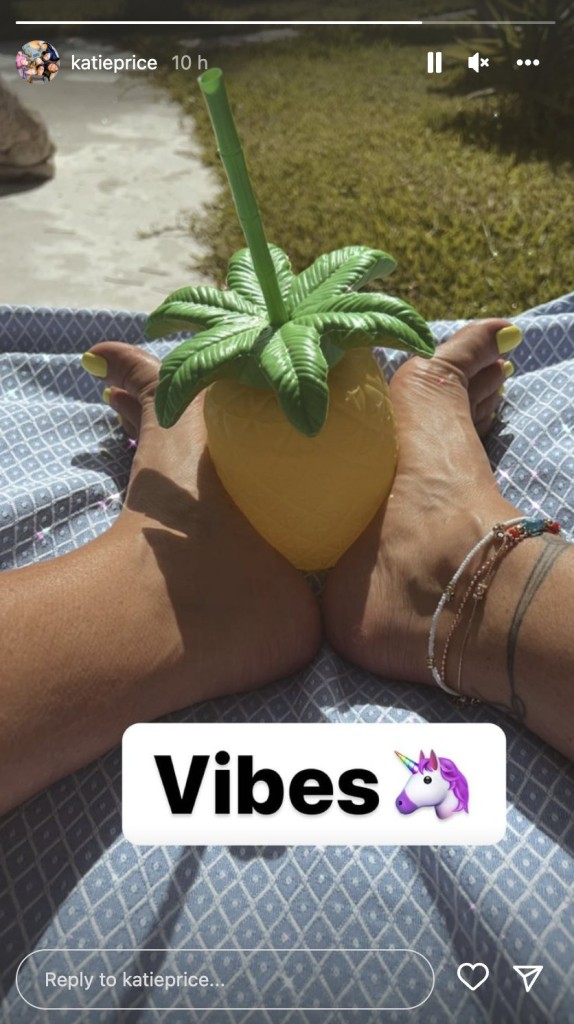 Katie Price and Carl Woods appear to be on holiday at the same time – and it’s either pure coincidence or they have indeed flown out together.

The pair’s relationship status has been up in the air with mounting reports that they’ve ended their two-year relationship, but both Katie, 44, and Carl, 33, deny the split claims themselves.

Well, they’ve only stirred up more confusion with the couple sharing very similar holiday snaps on social media at the same time.

On Thursday morning, Katie was spotted by fans at an airport with three of her five children – Harvey, 20, Jett, nine, and Bunny, eight – and Carl was nowhere to be seen.

Hours later, the My Crazy Life star landed in an exotic location and made a casual return to Instagram – after a two-month break – by sharing a photo of her feet hugging a pineapple drink on grass.

‘Vibes,’ she captioned the photo in her Instagram stories with a unicorn emoji.

Carl gave his followers a glimpse of the swimming pool (Picture: @carljwoods, Instagram)

Just three hours later, former Love Island star Carl shared his own sun-kissed Instagram stories, filming a set of inflatables in a swimming pool and a barbecue, also near a suspiciously similar grassy area to Katie’s.

‘That is perfect cooking temperature,’ Carl told his followers while inspecting the barbecue.

A woman’s voice and children screaming was also heard in the background only fuelling the speculation that Carl has joined Katie and her kids on the getaway.

It’s safe to say neither of them were in the UK judging by the heavy downpours of rain earlier today.

Katie and Carl appear to still be together despite the rumours (Picture: @carljwoods/Instagram)

The holiday comes after Katie was pictured hanging out with wellness guru Jamie Kerr last weekend, with the two meeting at a party.

A source told The Sun: ‘Jamie and Katie get along really well and he’s been a great support for her.

‘They attended a friend’s birthday party together last week and seemed really comfortable in each other’s company.’

MORE : Jeremy Kyle quips he ‘hasn’t got a career’ as he fills in for Piers Morgan on TalkTV