Love Is Blind: Are any of the couples still together in 2022? 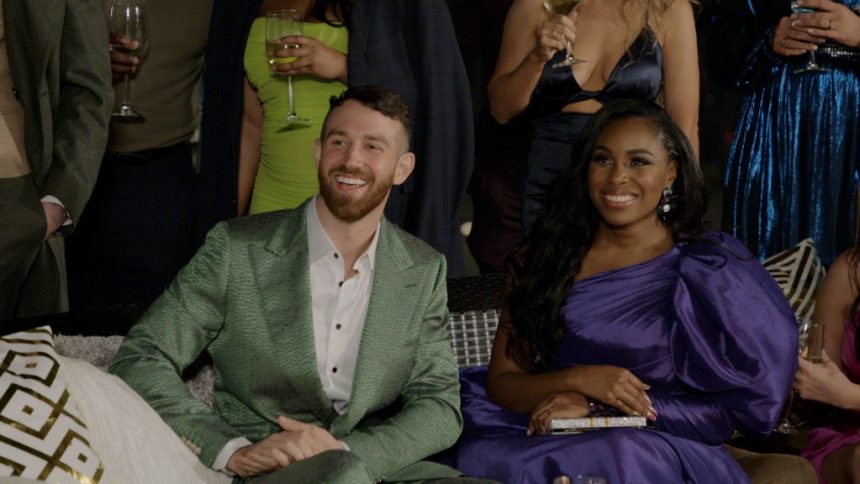 Love Is Blind is back on Netflix for season 2, two years after the dating show gripped viewers across the globe with the unconventional love experiment.

This week, the trailer for the second season of the hit reality series was released, teasing more romance, twists, turns and a whole lot of drama – and we can’t wait.

The premise of the show is that in the space of 10 days, singletons looking for love have the chance to get engaged after getting to know strangers in pods, where they never see each other’s faces.

After getting engaged, they move in together – with their weddings scheduled for just a few weeks later.

While a number of the participants in season one didn’t make it to the proposal stage, some made it all the way, with a few maintaining their relationships to the present day.

So which couples went the distance?

Lauren and Cameron were firm fan favourites throughout (Picture: Netflix)

Lauren Speed and Cameron Hamilton, one of the biggest success stories from the first season, are still going strong over three years after filming began in October 2018.

The couple share a YouTube channel called Hanging With The Hamiltons, which has over 670K subscribers and features regular vlogs, with the pair opening up about everything from date nights to house tours and workouts.

In November last year, Lauren shared a post on Instagram in celebration of their third anniversary, writing in the caption: ‘A love story I could have only dreamed of… not perfect but perfect for me!’, before adding: ‘Now let’s have some babiessssss.’

Amber Pike and Matthew Barnett have been a part of their fair share of drama on TV, largely due to the semi-love triangle Matthew found himself in with Amber and Jessica Batten.

In the end, Amber and Matthew followed their hearts and tied the knot and are still just as loved up today, as their Instagram posts can attest.

In a recent Instagram post, Amber spoke out against people who ‘have their opinions about Matt and I and how we live our life’, stating: ‘I have been nothing less than blessed to find a partner that looks at life the same way that I do, as an adventure meant to be lived out instead of just dreamt about.’

Damian and Giannina have had an up-and-down relationship (Picture: Netflix)

When Damian Powers told Giannina Gibelli at their Love Is Blind wedding that he couldn’t go through with it, it seemed as though that was the end of the road for the couple.

However, they did reignite their romance in the outside world – only to hit more roadblocks and break up again in 2021.

During the reunion show After the Altar: Two Years Later, which was released last summer, Damian brought Too Too Hot To Handle star Francesca Farago with him, leaving Giannina fuming as the former couple considered the possibility of a reconciliation.

It didn’t work out for Mark and Jessica (Picture: Netflix)

Despite also bonding with Matthew in the pods, Jessica ended up becoming engaged to Mark Cuevas, with whom she initially struggled to form a physical connection.

After arriving at the altar during their wedding, Jessica revealed to Matthew that she couldn’t go through with the nuptials.

When it came time for After the Altar to air, Jessica revealed she was in a relationship, while it was discovered that Mark – who didn’t appear – had apparently cheated on Jessica during their engagement, subsequently dated and cheated on fellow Love Is Blind star LC Chamblin and was expecting a baby with another woman.

It seemed as though the couple had a fairytale romance (Picture: Netflix)

Kelly Chase and Kenny Barnes were undeniably one of the most adorable couples on the show, with many viewers not having any reason to suspect that their relationship could go south.

However, on the day of their wedding, the couple broke up in tear-jerking scenes.

During the reunion show After The Altar, it was revealed that Kenny is in a relationship, having proposed to his partner in 2020, while in a recent Instagram post, Kelly wrote that one of her new year’s goals was to ‘have a boyfriend, best friend, companion’.

The pair didn’t make it to the altar (Picture: Netflix)

Diamond Jack and Carlton Morton have had a tumultuous relationship, initially sharing a loving chemistry that resulted in a dramatic fallout.

When they arrived in Mexico for the engaged couples’ trip ahead of their weddings, Carlton became emotional as he revealed to Diamond that he was bisexual, explaining that he previously thought that she would ‘pre-judge’ him.

Is Melanie Cavill alive in Snowpiercer season 3? Fans desperate to know her fate

When is Stranger Things season 4 coming out?

Diamond was upset that Carlton hadn’t been open with her from the start, walking away after he called her a ‘b***h’.

During the 2020 reunion show, the pair became emotional as they discussed their relationship, with Carlton getting down on one knee and offering Diamond her engagement ring back as a symbol of their friendship.

Love Is Blind season two launches on February 11 on Netflix.