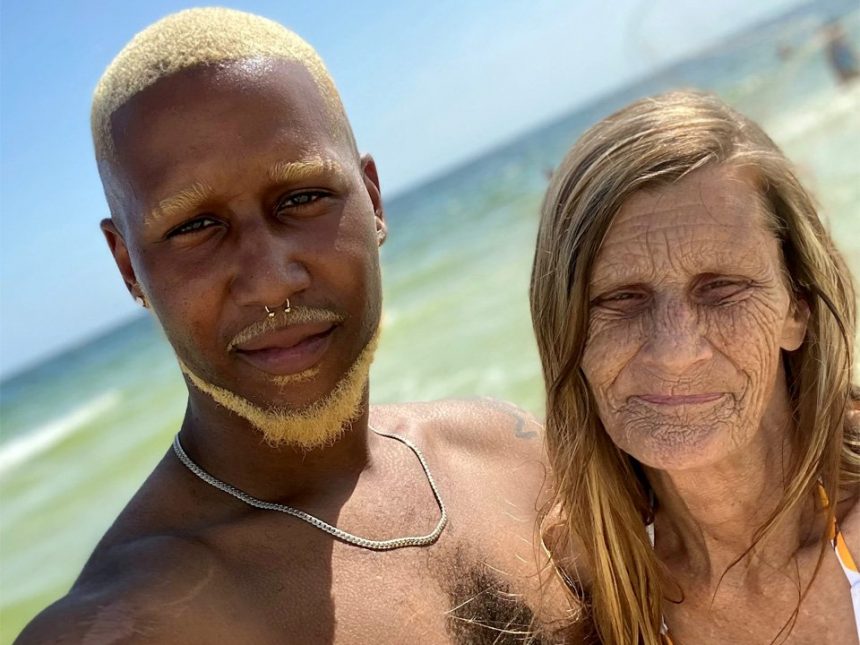 The pair have blocked over 700,000 accounts on TikTok after receiving a barrage of criticism (Picture: Quran McCain/SWNS)

A 61-year-old grandmother who recently married a man 37 years younger than her has revealed how they’re planning on having a baby via a surrogate, after attempts to conceive naturally failed.

Cheryl McGregor from Rome, Georgia, first met Quran McCain in 2012, while they were both working at American fast food chain Dairy Queen.

At the time, Quran was 15 years old while mum-of-seven Cheryl was 52, and the pair didn’t initially spark up a romance. It was when they reconnected in 2020 that their relationship blossomed.

Quran’s own grandmother is just six years younger than Cheryl, who has 17 grandchildren of their own, and their age gap sparked criticism when they posted videos of themselves online.

Quran previously said: ‘Nobody was accepting, everyone thought we were joking or thought it was all games.’

Despite their detractors, though, the pair were married in September this year, and started discussing having a baby soon after.

The couple have ignored their detractors, and are now trying for a baby (Picture: Quran McCain/SWNS)

Due to Cheryl’s age, attempts to conceive naturally were unsuccessful, so the couple began looking into surrogacy and adoption, saying they ‘feel they deserve children of their own.’

‘We prefer surrogacy, however, we have seen a lot of people embroiled in legal complications far after the child is born,’ Quran said.

‘We are looking for a nice surrogate who is willing to sign a contract to have nothing to do with the child after its born.

‘We don’t want people trying to have a baby for us for financial gain, we are not that financially inclined ourselves.

‘With adoption, we are looking for a biracial baby so the baby would know, “I have half black and half white parents,” so he [or she] would feel that we are his true parents.’

Cheryl has 17 grandchildren, and is just six years younger than her husband’s grandma (Picture: Quran McCain/SWNS)

Cheryl’s daughters were initially considered to carry the couple’s baby, but both have had hysterectomies so were unsuitable.

On top of the considerations over who the surrogate may be, Quran and Cheryl have also had to have tough conversations over how their age gap may impact raising a child.

‘We understand that I may not be there for as long as Quran is but I have faith in him,’ Cheryl explained.

‘If I am not here he can do it. He’s gonna be a great father, he’s a responsible adult. I had every bit of faith that he could raise our child and do it very well.’

They’ve also gained the backing of their relatives, with Cheryl adding: ‘Our family is also very supportive of our decision to have children, at first they were hesitant for the same reasons.

‘However, now five of my children have come to accept the idea and my mother-in-law and I make videos together.’

As well as documenting their unusual relationship on TikTok – including live-streaming their wedding ceremony – the pair recently started an OnlyFans account where they share more x-rated content.

Care worker Quran claims they’re used to fielding hate comments, but refuse to let it get them down. He said: ‘People on social media have a lot of hate for us, they say I’m dating my grandmother.

‘I am not, she is younger than my grandmother, we are no different from any other couple, love is love.

‘We get a lot of hate but it doesn’t phase us. At the end of the day, we still got each other and that’s all that matters.’

MORE : Travel hack shows you how to save on baggage fees with a travel pillow

Love Is Blind: Are any of the couples still together in 2022?


Eight telltale signs your partner might be about to propose