Why stonewalling is a major relationship red flag 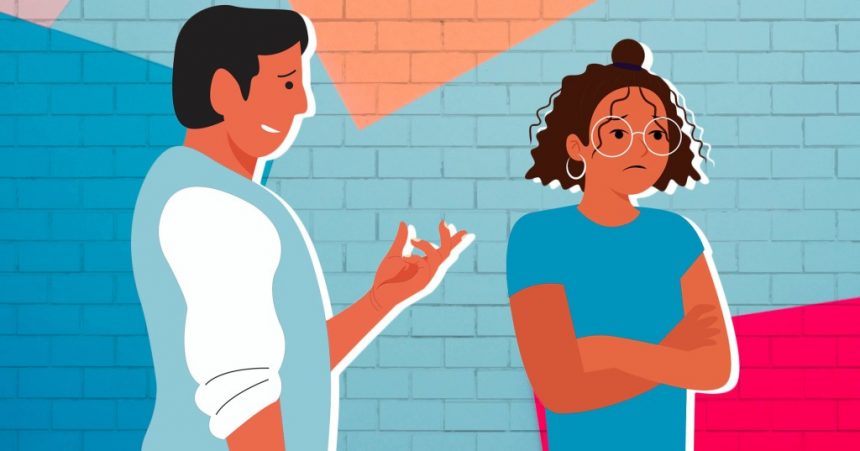 Stonewalling is painful for everyone involved (Picture: Getty/Metro)

The only thing worse than a screaming match is the silence that follows.

Even without a heated argument, in some relationships, the silent treatment is the most common reaction to conflict.

This is called stonewalling: when someone refuses to communicate with or acknowledge their partner’s presence following some form of disagreement.

As Dr Elena Touroni, a consultant psychologist and co-founder of The Chelsea Psychology Clinic, puts it: ‘Stonewalling is an avoidant behaviour pattern which involves refusing to communicate with another person.’

It also involves refusing to look at somebody or hold their gaze and, when left unchecked, can escalate for weeks or even months.

Sometimes, stonewalling is an intentional tactic used to punish the other party.

How to spot stonewalling

Is stonewalling a form of emotional abuse?

Stonewalling is similar to giving someone the silent treatment, and whether it should be considered abusive or not does depend on whether or not it’s intended to cause harm.

‘If the intention is to manipulate or cause emotional harm to another person, in these cases, stonewalling can be considered a form of emotional abuse,’ says Touroni.

Sally agrees: ‘When you choose to stonewall someone after an argument, you are intentionally punishing them by denying them communication.

‘You are behaving as if they don’t exist, and it feels hugely punitive, passive aggressive and painful for everyone involved.’

However, Elena notes that stonewalling is not always a manipulation tactic, rather it’s a ‘very unhealthy coping mechanism,’ used by someone who doesn’t know any better.

‘Someone might engage in stonewalling because this is the only way they know how to deal with their emotions, for example if they were not taught healthy ways of managing their emotions growing up or this way of behaving was modelled to them by parents and guardians,’ she tells Metro.co.uk.

‘While this behaviour is unhealthy it is not automatically abusive.’

However, Sally says, whether it’s learned or not, engaging in stonewalling is intentional, and causes a lot of pain.

Even when it’s a knee jerk reaction, it can cause the other person to question their own judgement on the argument (especially if they were the wronged party), and cause a lot of anxiety.

In fact Sally says, it’s a ‘massive red flag,’ and something that needs to be caught early.

Stonewalling is a red flag – when should you leave?

Given that, for some people, stonewalling is a learned coping mechanism, it’s probably fair to give them grace.

However, if they show no intention of changing their behaviour after you’ve been clear you won’t put up with the silent treatment, it might be time to think seriously about ending the relationship.

‘If this has become a pattern of behaviour and your partner is refusing to acknowledge it’s a problem or unwilling to learn a healthier way of communicating their feelings, then I would encourage someone to think hard about whether this is a behaviour that is going to help the relationship to grow in the long-term,’ says Elena.

How to work on eliminating stonewalling from your relationship

If you do, however, choose to stay with your partner on the condition they work through their stonewalling and find a better method to deal with conflict resolution, there are steps both parties can take.

How to stop resorting to stonewalling

If you find yourself resorting to stonewalling despite understand that it is both unhealthy and unhelpful, it’s important to stop it from becoming a knee-jerk reaction.

‘You might need to separate out for a few moments and take some deep breaths,’ suggests Sally.

‘Dig deep and find the courage to go back to your partner with a open question, or statement statement and tell them clearly can we find a way to get over this.’

Sally says that it’s important to be clear that you’re ready to communicate, because if you have a history of stonewalling, they might not realise straight off the bat.

How to communicate with someone who is stonewalling you

On the other hand, if your partner’s initial reaction is to stonewall, you may have to be willing to be the one to break the silence.

‘Tell your partner clearly that you’re not going to play the silent game and ask id you can find a way to communicate now,’ recommends Sally.

You need to be clear that you don’t want stonewalling to become a permanent feature of your relationship.

But, importantly, you need to approach your partner in a non-judgemental way, without attacking them.

‘If you go in with accusations, or if you go in in a heightened emotion, then they’re probably going to close down even more or close down for longer.’

But, she adds, ‘stonewalling is not a great way to handle confrontation, because it extends the amount of time that people are in conflict and it needs to be nipped in the bud.’

MORE : My experience of workplace gaslighting taught me that no job is worth your mental health


10 couples’ activities reignite the spark if your relationship feels stale