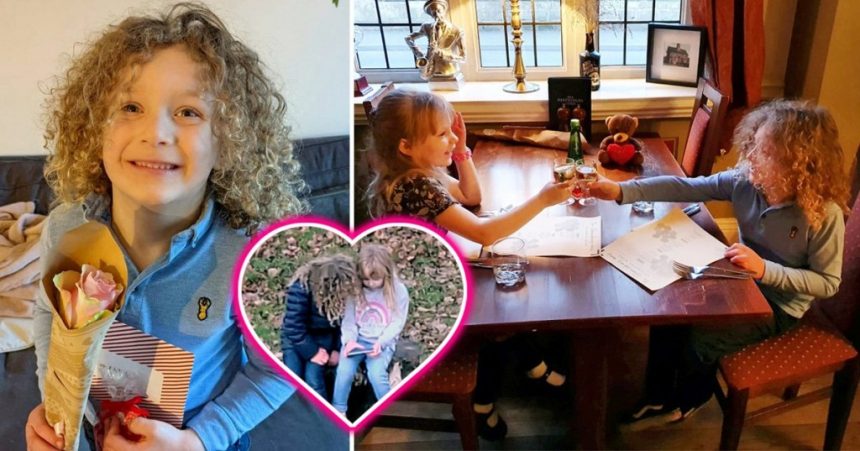 A pair of six-year-olds enjoyed their first date together after a restaurant let them dine at their very own table.

The cute couple even sipped on juice in wine glasses.

Little Guy Parker asked his mum if he could take Verity Owen-Taylor out for a meal after meeting her just two months ago – and calling her his ‘one true love.’

To help him with the girl of his dreams, his mum Gemma, 38, phoned several restaurants until she found one to accommodate the unusual request of hosting two primary school children.

The pair dined at the The Shrewsbury Arms in Albrighton, Shropshire, where they ordered their own food and enjoyed Appletiser in wine glasses.

For a starter, Verity had soup while Guy enjoyed nachos. For mains, they both had fish and chips and finished with ice cream.

Restaurant staff say Guy was the ‘perfect gentleman’ and waiters helped the kids with the menu while Gemma kept an eye on them from a nearby table.

‘I was nervous but he’s my one true love and my boyfriend,’ Verity said after the date.

The pair before their date (Picture: SWNS)

Guy first wanted to have dinner with Verity at his own home once they could be alone. However, he soon wanted to venture out.

The romance is going so well that Verity has even asked her mum Katie, 36, to be her bridesmaid when the young lovebirds, of Cosford, Shrops, eventually tie the knot.

Before their evening out, Verity gifted Guy sweets and a teddy bear holding a heart declaring ‘Guy and Verity 2022’ and Guy bought his girlfriend some roses.

‘Guy and Verity somehow got together in school, I was unaware of it at first,’ Guy’s mum Gemma says.

‘Originally he wanted her to come for tea but he wanted me and his dad to be in another room.

‘He then said he wanted to take her out for a proper meal. It was so we could treat it like he had booked it, like he was an adult.

‘He loves food and we go to restaurants a lot, we always eat out. He goes out with us all the time. We’ve always tried to bring him out with us.

‘The date went well, they just chatted for the two hours. Kids eat really slow when there’s not an adult around. They ordered by themselves and the restaurant provided complimentary children’s wine too.

‘The staff were really patient, they treated them with a lot of respect, and I think it was a good learning experience for them.’

To make their story even cuter, Guy’s nanny and grandad Martin and Yvonne Riley met in the same restaurant 40 years ago this year.

‘It’s nice he’s sort of followed in his grandparent’s footsteps – even though he is obviously just six,’ Gemma adds.

‘He told me that Verity was his one true love and that she says the same about him.

‘It must have been around January that they became friends, then it came to this, it’s very serious now.

‘They see each other pretty much every day.’

‘Then she came home one day just saying he’s her boyfriend now,’ she recalls.

‘Verity is a proper princess type girl and in her words he is her “one true love”. She got him a teddy bear for their date and he bought roses – he knows how to treat a lady.

Guy was eager to have dinner with Verity at his house (Picture: SWNS)

‘They’re planning their second date over Easter, they’re going strong. She’s asked me to be her bridesmaid so it’s got very serious rather quick.

‘She only started school in September but it was love at first site.

‘We live on an RAF base and her dads in the Falkland’s, so she needs something, she needs a distraction. It’s a little community, everyone is very close. The kids have brought the parents together. It’s quite adorable really.”

A post on The Shrewsbury Arms’ Facebook page revealed how they agreed to accommodate the youngsters as they didn’t want to ‘stand in the way of true love’.

It read: ‘So – a few weeks ago we had a very special request here at the Shrewsbury Arms.

‘A very sweet little boy had asked his mum to call the Shrewsbury Arms and book a table for him and his girlfriend that he wanted to take for dinner.

‘Nothing too unusual……but these little love birds were six.

‘Guy’s mummy explained she would be close by and always supervising but did we mind them having their own table and ordering their own food?

‘Of course we aren’t going to stand in the way of true love so we welcomed Guy and Verity on their very own dinner date.

‘We can confirm he was the perfect gentleman and with a little help from our team with the menu, they had a wonderful dinner.’

The young lovebirds are now planning a cinema date for the Easter half-term.

MORE : I’m maternal, loving and in a long-term relationship – but I don’t want kids

MORE : Couple take in lost baby squirrel and nurse her back to health


Why stonewalling is a major relationship red flag