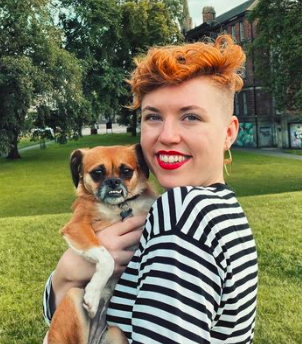 ‘So do you still fancy dead people or…?’

When it comes to getting the inevitable sneaky ‘You up?’ text or DM slide from someone who’s ghosted you in the past, I think I can safely say this isn’t what most people expect.

We’ve all been there. A date has gone — in our eyes — really well and you spend the next few days sitting eagerly waiting for that text asking to meet up again, because, duh, you’re the most wonderful company they’ve ever experienced.

But that text never arrives — and the coming weeks are spent wondering what the hell you did wrong. Did I have something stuck in my teeth? Was my hilarious story actually just unhinged trauma sharing? What if I barked instead of saying hello?

However, I don’t think: ‘Oh maybe he thinks I shag dead people’ is a conclusion many of us would jump to.

Let me set the scene.

I was in my early twenties, had broken up with the person I thought was the love of my life and had begrudgingly decided to go on a date with (let’s call him) Lee, who’d convinced our mutual friend to set us up.

Despite being prone to bad decisions following my recent heartbreak, the date was a lot of fun. It turned out we had a lot in common: similar interests and shared ambitions.

He asked me loads of questions about myself, made me ache with laughter and offered to pay for dinner. When he went to the toilet, I texted my pal: ‘Here, he’s an actual babe, I definitely want to see him again’.

Suddenly, the whole atmosphere of the date changed. Lee stared back at me weirdly and changed the subject

Lee and I carried on chatting over drinks and, loosened up by the booze, I told him that I might have narcolepsy – a long-term brain condition that can cause people to fall asleep suddenly, something I’d recently started doing, much to the worry of those closest to me.

Suddenly, the whole atmosphere of the date changed. Lee stared back at me weirdly and changed the subject to what he was up to that weekend with ‘the lads’, which hurt my feelings as I didn’t think I’d massively overshared by telling him something about my health.

I’d recently told my family and friends about the possibility of me having narcolepsy and I’d been overwhelmed by how supportive everyone was as I tried to pursue a solid diagnosis. I took Lee’s reaction as a bit of a red flag but, lacking self-confidence at the time, I told myself that I needed to keep schtum about things like that.

The date ended soon after and he made a quick exit. I didn’t hear back from him when I sent a ‘I had a lot of fun tonight, we should do it again!’ text. I was gutted and used my disappointment to remind myself why I wasn’t actively dating.

Slowly, I moved on, got back out there and put the experience down to ‘some people are just a bit s**t’.

And, then, years later, a text pinged up on my screen in the early hours of the morning.

I’d been at an afterparty at someone’s flat and was checking my phone to see where my taxi was when I saw his name. Flicking it open, there was the classic text we all know from that time of night: ‘Hey! Long time no speak, how have you been?’.

No s**t Lee, seriously? After years of silence, you think now is the time to hit me up? A random Saturday morning, years after our date, at booty call o’clock?

He had thought I meant necrophilia when I told him I might have narcolepsy (Picture: Dayna McAlpine)

Seething and full of crap vodka I angrily typed back: ‘What do you want?’, while fully aware what he wanted… or so I thought.

‘So do you still fancy dead people or…?’

‘What the f**k are you on about?’, I hammered back. Surely this is a wind-up, I thought. He’s probably out and he and his pals are having a nice laugh at me, some poor bird he ghosted years ago.

‘Lol mind you told me you might fancy dead people on our date’, he replied, with a laughing emoji.

It suddenly all dawned on me. The sudden change in atmosphere on that date all those years ago. My friend had said that Lee would never tell her why he didn’t want to meet up again.

He had thought I meant necrophilia when I told him I might have narcolepsy.

Following a stream of texts from me frantically pointing out his mistake, he replied: ‘Oh man, I’m so sorry I’ve been the winner of the worst date ever story for years because I thought you were a corpse shagger.’

‘Now that we’ve cleared that up, what you up to?’

Unsurprisingly, I never texted Lee back after that and to this day I still wonder how many people out there in my hometown of Edinburgh mill about thinking I’m into necrophilia because of this guy.

More concerningly, how many failed dates had he been on to think, at 4am that fateful Saturday morning: you know what, I’ll hit up the girl who fancies dead guys for a sneaky link? Maybe she’s chilled out a bit?

For the record, as well as not fancying dead people (a statement I never thought I’d have to say as many times as I have now at this point) I also don’t have narcolepsy – I have chronic fatigue syndrome/ME, which affects 1 in 250 people in the UK.

I may have been the subject of Lee’s worst dating story ever for years, but there’s a small shred of justice in him now being mine. I’ll never forget it, ‘til death do us part.

MORE : I was really into her – until she brought her biphobic friend along to our date

MORE : We smoked weed, had sex and never saw one other again – it was the best date

The truth is, it’s almost impossible to get over the heartbreak from your first love


Yes, I’m disabled – but that doesn’t mean you have the right to ask me whatever you want