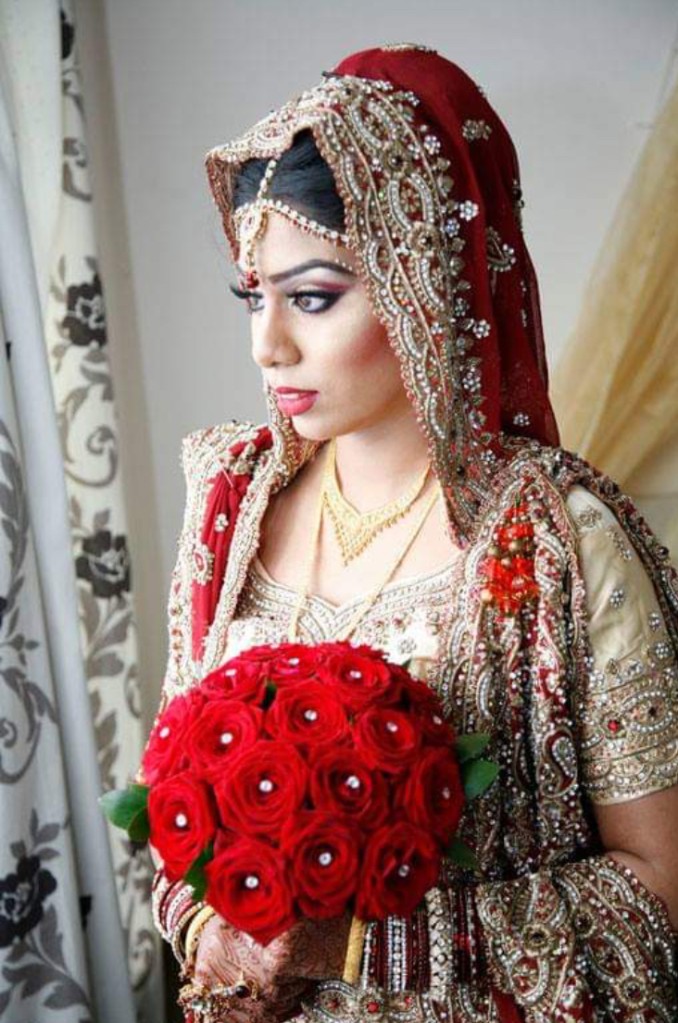 ‘Do you love him?’ a client asked me, point blank, after I revealed my engagement.

Though I was brimming with happiness about my upcoming wedding, I felt deflated that I, an Asian woman who’d been through a hybrid arranged marriage process of sorts, had to provide assurances that yes, I was indeed happy. And in love.

I can’t help but feel that a non-Asian person would never be asked the same question.

Being a British-Bengali Muslim, I grew up with the concept of the arranged marriage process.

I refer to it as a ‘process’, by which I mean your family and extended circle would introduce you to potential matches as a supplement to your own efforts.

It was like Match.com, minus the computer – the algorithm was the community.

However, growing up in a small town where I was the only Asian kid in my class, it was something I would never, ever talk about. Why? Because the word ‘arranged’ is often confused with something else – it’s suggesting that it’s forced.

Though I’d avoid discussing it, I didn’t always get the choice. I’d get asked questions often.

I remember being ambushed at work years ago when a colleague asked me, very loudly, if I ‘had to’ have an arranged marriage.

If you’re Asian, it’s everyone’s business and mission to find you a match (Picture: Halima Khatun)

Other colleagues looked up from their computers to hear what the brown girl would say.

I answered in the usual way: denial. It was too difficult a conversation to have with people who already had a loaded misconception. Everyone seemed relieved by my response.

There’s such a negative stance around arranged marriages. We hear news stories of people being forced to marry strangers. Modern literature concurs, as the protagonist is often a submissive object of pity. Or, it’s a last resort the heroine desperately wants to avoid.

It’s clearly something my client thought when he asked me if I loved my fiancé.

I was wholeheartedly, genuinely happy – and certainly not a distressed heroine that needed saving from a cruel, Disney-style villainous husband.

If anything, I was distraught that my race got in the way of (mostly) white people sharing that happiness with me.

To the uninitiated, my marriage is different from a conventional ‘western’ courtship.

We were engaged by June and married three months later that September (Picture: Halima Khatun)

My husband and I met people through family, before finally finding each other through friends.

We texted each other first, then moved to talking on the phone, before meeting for coffee in November 2011. By the time we met, we knew each other pretty well.

Our families met the following February.

We were engaged by June and married three months later that September – after knowing each other for less than a year.

This may seem quick, however, I want to assure you that it was 100% my choice.

Nearly 10 years and two kids later, I’m glad to say that I’m as happy now as I was back then.

Ours is more of a hybrid union, as it wasn’t really arranged for us. We met of our own accord and I couldn’t ask for a better married life.

My husband and I travel the world, enjoy our respective careers and have amazing date nights. However, if we hadn’t met in this way, I would have still been introduced to prospective future husbands through my family. And here’s the thing – I was fine with that.

I couldn’t have been happier on my wedding day.

I was excited but, most of all, nervous. We had over 600 guests, which was hefty even by Bengali standards, and all eyes were on me.

My husband and I travel the world, enjoy our respective careers and have amazing date nights (Picture: Halima Khatun)

As a sea of guests came to greet me – from work colleagues to friends, relatives and neighbours – I was reluctant to commit any food-based faux pas, such as getting lettuce stuck in my teeth or smearing my lipstick.

Then came the time to join my new husband on the stage for the first time that day.

I walked towards him in a makeshift procession, flanked by my sisters. Once we saw each other, as corny as it sounds, my nerves dissipated.

After getting married, I started talking about my culture. It started with safe subjects, like the challenge of finding the right foundation for brown skin, then I went further.

I wrote a book called The Secret Diary of an Arranged Marriage, a brown Bridget Jones-style novel that shows the process – warts and all. The book has been an eye-opener and shows that despite our differences, we are fundamentally the same.

I wanted to draw attention to how easily we make presumptions about another person’s marriage because of the colour of their skin, their religion and heritage.

Here’s the thing: do you know anyone who is single and looking to settle down, but finding it hard to find the right person? I do.

Watch this talented cocker spaniel play tennis with his owner

There is also a feeling that asking people to help them find a partner seems desperate.

That’s the difference when you have an arranged marriage process. I’m not saying it’s perfect, however, for most people, when you’re single and looking, it’s nobody’s problem but your own.

If you’re Asian, it’s everyone’s business and mission to find you a match.

You can order Halima’s book here

MORE : After being with my husband for four years, we opened up our marriage

MORE : EastEnders spoilers: Kathy stands up against hate after Islamophobia

10 couples’ activities reignite the spark if your relationship feels stale


On my worst date, he gave me a very unexpected and odd gift