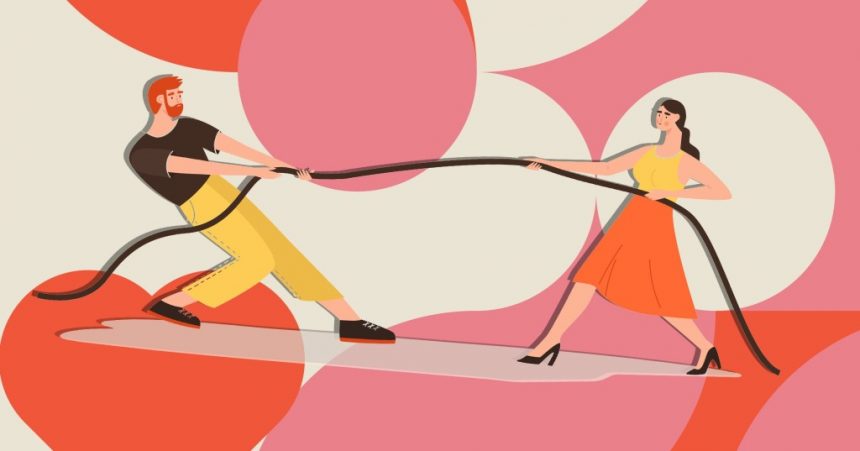 If your date treats you like this, you need to run (Picture: Shutterstock)

You’ve got to meet new people, figure out if you click with them, and then spend an age in the purgatory that is the talking stage – until you either decide to make a go of it, or call it a day.

Sure, dating can be fun, but it’s unfortunately all too common for people to see it as a game with points to be scored to bag the upper hand.

There are actually male dating coaches out there who make a living out of telling other men how to do this.

These ‘pick up artists’ spew sleazy advice for maximising their chances of success with women.

Rather than, you know, talking to women like human beings, these are guidelines for manipulating the opposite sex into liking you.

The ‘push pull method’ of dating originates from this community.

The premise, explains eharmony relationship expert Rachael Lloyd, is that attractive single women are frequently chatted up and flooded with compliments, which makes it harder for men to find a date.

Therefore, the belief is, ‘behaving in a counter-intuitive way will grab their attention,’ Rachael explains.

She continues: ‘The idea is to combine a positive statement or action with a negative one, to keep the recipient stimulated and on their toes.

So, a guy might say: ‘We should grab a drink. Providing you’re not high maintenance!’

This sounds awful – because it is.

‘Push, pull dating is a tug of war on emotions with neither side winning,’ says Dennie Smith, Founder of dating website The Geek Meet.

It normally happens like this: Your dating journey all appears to be going smoothly. You’re talking every day, laughing and getting to know each other.

You don’t want to get too excited, but all signs point to a relationship forming.

Then, quite suddenly, someone – usually, in Dennie’s experience, the male in a heterosexual relationship – becomes distant without any explanation.

‘This has a dramatic effect on the rebuffed person,’ Dennie says.

Licking their wounds, this person just starts to rebuild the confidence they lost, when this person pops back up again, usually with a feeble excuse.

Everything will be good again until they withdraw, just like before.

‘This will continue until one of you calls it a day,’ Dennie warns. She’s seen this drag out for weeks with couples, going back and forth with excuses that elicit pity rather than questions around the sudden disappearance.

How is it different to someone being hot and cold?

The push-pull method is more specific.

If you spend some time reading advice from any of the self-styled ‘pick up artists’ they will tell you it’s about creating interest and ambiguity, and that women find this attractive.

Since, according to these guides, women make dating decisions based on emotion rather than logic (oh, silly irrational women!), they get bored if you only make them feel positive emotions.

The advice is grim.

It ranges from giving a girl a compliment then following it up with an insult, ignoring her in group situations to make her fight for your attention, essentially negging her and, grimmest of all, ‘groping her intimately saying you are ‘not supposed to be doing it’, then ‘pushing for sex’ again.

Despite its roots in male pick up artist culture, Rachael says it’s not uncommon for both men and women to employ push-pull tactics if they’re struggling to get a date or keep a match interested, but agrees that it is more likely to be used by straight men.

‘The pursuer is not being themselves; they’re coding their behaviour according to a pre-set blueprint.’

This can leads the victim feeling frequently anxious as they are unsure of how the other person truly feels. You may find yourself perpetually confused, having doubts about your personality traits and desirability. This, Rachael warns, is a major red flag.

This can be a special kind of hell for anyone with an anxious attachment style, who can become addicted to people exhibiting this avoidant behaviour.

The fact you’re constantly on edge, means dopamine (the motivation hormone) is also swimming in the mix,’ Rachael says.

This cocktail of neurotransmitters is going to make you feel awful, and reliant on receiving positive reinforcement.

How to break away from a push and pull dater

No healthy relationship is going to start with one person manipulating the other, so how do you break free of the cycle?

Dennie advises you tune into that gut instinct that’s telling you to wary, and actually pay attention to red flags (rather than pretending you can’t see them because you like the guy).

‘You should never give your time and love if it’s not reciprocated. This type of relationship will rarely work. Know your worth and move on,’ she added.

To give you the confidence to do so, Rachael recommends connecting with people who make you feel secure. This can be friends or family members.

She continues: ‘Make sure you share what’s happening because push pull dating is designed to make you feel isolated and insecure.

‘Also, recognise a negative comment or behaviour and challenge it. Call your partner out on it and ask them what’s lacking in them that they feel the need to put you down.’

Ultimately, Dennie says that if nothing changes you should be prepared to leave.

‘A relationship should feel supportive and safe. Do not mistake heartache with love,’ she adds.

My date wet the bed and pretended nothing had happened

How I Do It: 'I can't remember the last time I had sex – now I'm dating myself'

If you find yourself being low-key toxic yourself to try to impress somebody, Rachael asserts that there are ways to not come across too keen without insulting anyone.

‘For instance, you might say, “I’d love to catch for a drink, but I’ve only got space next week”. Or, “I’d like to stop and chat, but I’m on my way to meet a friend. Here’s my number in case you want to connect.”

‘This creates an intention, whilst balancing it with a signal that your time is important,’ she says.

Above all, it’s important to focus on finding someone you are actually compatible with.

‘Don’t get too hung up on one person or outcome,’ Rachael adds. ‘Trust that if it’s meant to be it will be, and don’t resort to manipulative tactics.’

MORE : Why do employers still not trust people to work from home?

MORE : We can’t get enough of the ‘enemies to lovers’ romcom trope – but can it ever work in real life?

MORE : How to re-grout a shower

My date wet the bed and pretended nothing had happened