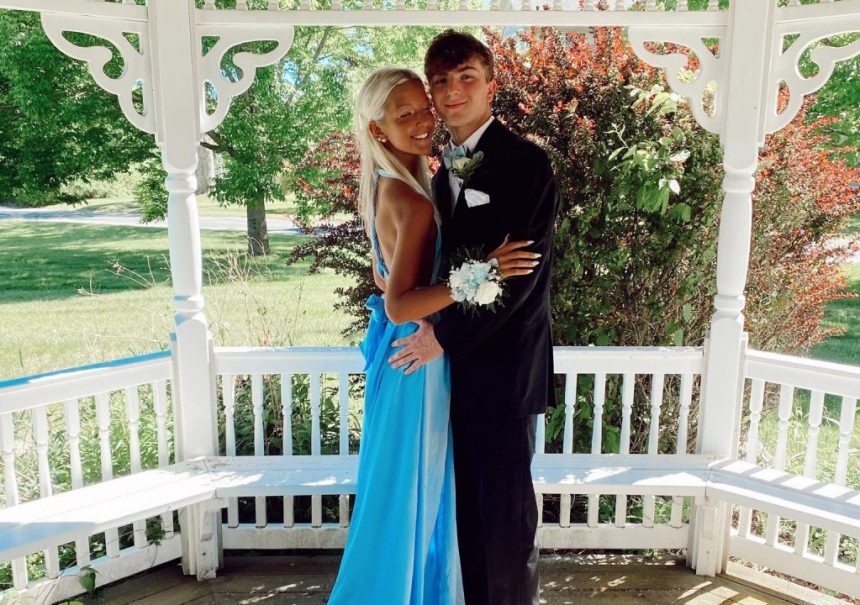 Lydia and Jaeden, both 18, had been together for two years when they split (Picture: Jam Press/@lydia.bird)

Getting a refund for flights and holiday accommodation is no mean feat at the best of times – and apparently they don’t consider the passengers breaking up as an acceptable reason for cancelling.

At least that was the case for Lydia Bird, 18, who travelled to the Dominican Republic with her ex – a month after they split – as the trip was non-refundable.

Lydia, from Connecticut, US, was determined to still go on the pre-booked holiday – even if it meant going with her ex, Jaeden Lemelin, also 18.

The couple, who had been together for two years previously, booked their spring break holiday to Puerto Plata, Dominican Republic, in early January.

When their relationship unexpectedly ended, Lydia called Cheap Caribbean, the company they’d booked with, who informed her there were no cancellations or refunds available.

‘At the time of planning the trip we did not anticipate a break up at all,’ said Lydia.

She continued: ‘I ended up breaking up with him a little over a month before the trip, there were a variety of reasons, but basically things weren’t working and we ended things on relatively good terms.

‘I spoke with my mother and she agreed to take Jaeden’s place on the trip, I called to change his name, and we found out she would have to purchase an entire vacation to be allowed to come.’

Their flights were delayed by 10 hours, which added to the awkwardness (Picture: Jam Press/@lydia.bird)

Lydia initially offered the tickets to Jaeden, saying she would still pay her half. However, he suggested both going along, since they’d forked out for the tropical holiday (and would lose money whether they went or didn’t).

‘Although I was excited, I was very hesitant to travel especially because the break up was so new,’ said Lydia.

Things did get difficult for Lydia at times, given how little time the couple had been broken up (Picture: Jam Press/@lydia.bird)

Nonetheless, she took the plunge and, despite a 10-hour flight delay, they had an amazing tropical break.

Lydia said: ‘We spent tons of time at the beach and pool. Weirdly, after two years being together this was our first big trip together even though we were broken up.

‘We went out to dinner, enjoyed the ocean, the shows at night, as well as all of the entertainment. I would love to go back, Puerto Plata was beautiful.’

As much as the holiday was amazing, Lydia found it hard at times.

She said: ‘Traveling together this soon after the break up was a challenge because he and I have been so close for so long.

‘We dated for over two years and it wasn’t a “see each other a couple times a week” relationship – we spent every day together, so we became insanely close.

Followers are banking on the couple reuniting (Picture: Jam Press/@lydia.bird)

‘Although we both know we will always be close, I think Jaeden would agree that we needed to focus on building our friendship so we can still be in each other’s lives.

‘I told him before the trip that I wanted to stay strictly friends, especially because the break up was so recent.’

After sharing sneak peeks of the potentially awkward holiday, Lydia has been inundated with comments. Some people have suggested she and Jaeden get back together, while others think it sounds like a nightmare vacation.

‘Yep, they’re def gonna hook up,’ one viewer commented, while another commented, ‘$20 they get back together.’

How to be more compassionate at work (and why it matters)

Eight wearable trends to invest in this spring

One person added: ‘I actually did this once – we called it our farewell tour and it was the best week of our relationship, we left on a good note with good memories.’

It seems like the plot of a romantic comedy or novel, but it doesn’t appear Lydia and Jaiden will be rekindling things at the moment.

The happy ending may not be them getting back together, rather learning to be friends and move on amicably and with maturity.

MORE : Four best friends who met when they were three still inseparable after 80 years

‘My boyfriend makes fun of my holistic lifestyle – should I dump him and go for someone else?’