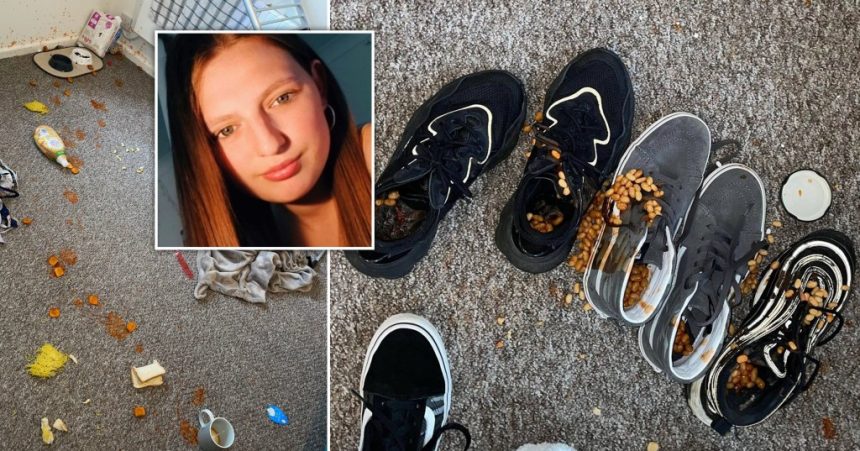 The scorned ex of Alisha Moy, 20, trashed her flat with food in revenge (Picture: Hook News)

This is the scene of an online relationship gone horribly wrong.

For once, we don’t mean the Tinder Swindler – but the scene of a scorned man wanting revenge after he was blown off.

Baked beans fill shoes, tinned spaghetti splatters the walls, clothes are ruined and the cords of kitchen appliances were cut.

Alisha Moy, 20, came home to the dreadful scene after calling it off with Jordan Cobbold, 21, following just a few weeks together.

Alisha said: ‘This was my first home and Jordan completely violated it.

‘Thanks to him I suffer with trust issues now. I despise him.’

Alisha moved out of her family’s home and into her first flat, in Ipswich, Suffolk, in January last year.

She was single and had been using Tinder on and off for a while.

Baked beans were poured into her shoes and the flat in Ipswich, Suffolk was trashed (Picture: Hook News)

Alisha burst into tears when she saw this scene (Picture: Hook News)

‘I was looking for a long-term relationship but, until Jordan, I’d never met up with any of my matches and really just used Tinder to chat with old school friends,’ she said.

‘But I wanted to meet Jordan in person, and after we’d been chatting for a while I invited him round to my place.

‘I was attracted to him – he dressed well and looked like he worked out.’

After they had been dating for a couple of weeks he suggested he take a spare key to her flat.

‘It was on the kitchen worktop,’ Alisha said. ‘He thought it would be nice if he let himself in while I was at work so he’d be there when I got home.

‘I didn’t really get the chance to say no – so then he had a key to my flat. It was really playing on my mind and I remember calling my mum because I was worried about it.’

Soon after this she realised their relationship was going nowhere.

She said: ‘Things turned weird. We’d be watching a film and he’d just burst into tears for no reason.

‘I’d ask him what the problem was, but he’d just ignore me.

‘Then, when we got together, he started saying stuff like, “This is the stage of the relationship when everything starts going wrong.”

Alisha has sworn off Tinder after her dreadful experience (Picture: Hook News)

Her relationship with Jordan Cobbold, 21, only lasted a few weeks (Picture: Hook News)

‘We’d only been seeing each other a matter of weeks! It was so confusing, I couldn’t understand why he was being so intense and needy.’

Alisha eventually messaged him to call it off and then he blocked her.

She went to work the next day and returned around 6pm, but ‘knew something was wrong as soon as she walked into the hallway’.

‘I usually leave all the interior doors open, but someone had closed them all,’ she said.

‘I opened my living room door and just burst into tears at the sight in front of me.

‘He’d pulled my shoes out of the little cloakroom and poured beans and spaghetti in there.

‘There were condiments splattered all over the walls and cooking sauce poured all over my vacuum cleaner.’

When she reached the kitchen she found the leads of her brand new appliances had been cut through.

The walls had to be repainted after they were angrily splattered with food (Picture: Hook News)

Alisha added: ‘I’d had some money from my dad for my birthday a few days earlier and spent it on new appliances.

‘Leads for the kettle, microwave and coffee maker had been cut through. They’d literally only been in there for a day. I hadn’t even used the microwave.

‘The fridge freezer had been turned off and cooking oil poured all over the place.’

She called her mum in tears after finding her make-up destroyed, shower gel in her drawers and a shoe in the toilet.

‘I couldn’t even speak,’ she said. ‘Mum had to call the police for me because I couldn’t get my words out.’

While police investigated the crime, Alisha moved out to stay with a relative.

She told officers she thought Jordan may be responsible and they arrested him a few days later.

After returning she spent a day and a half cleaning up the flat with help from family. She had to repaint the walls and get in professionals to clean her carpets.

Some appliances could be repaired, but others had to be thrown away.

The damage caused was estimated at almost £1,520.

Alisha added: ‘It was heartbreaking. It took months before I felt safe again.’

She has vowed not to go back on Tinder and has since met someone new.

Jordan previously pleaded guilty to criminal damage and one count of burglary after he took a necklace he had given Alisha for her birthday.

He was sentenced to a two-year community order, with 30 rehabilitation activity days and 180 hours of unpaid work, at Ipswich Crown Court in January.

He was also ordered to pay Alisha £1,750 in compensation and £425 in court costs, and was given a five-year restraining order.


Are you the dreamer or the accountant in your relationship?