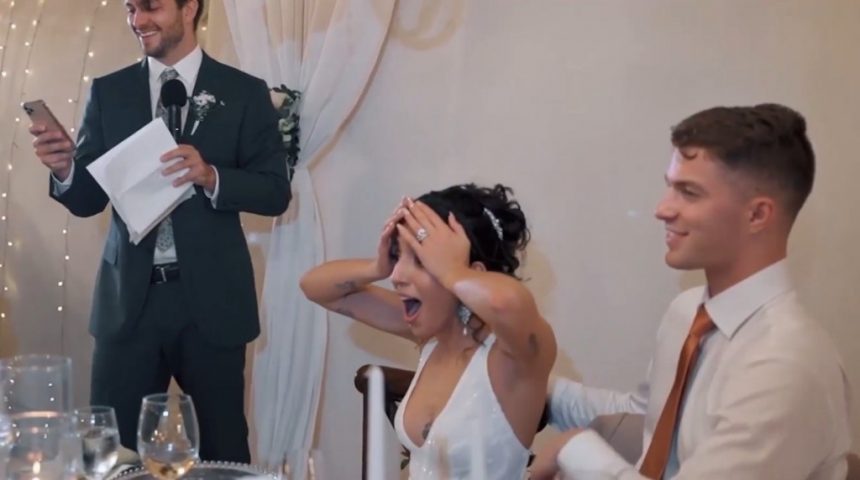 A woman who tried to play it cool after meeting her soon-to-be husband has been left blushing after her true feelings were revealed in a voice note played at their wedding.

Sabrina Flores admits she had tried to be coy when she met Brendon de Spain, 24, on dating app Bumble two years ago, but told her best friend John Martin her true feelings in a voice note after their first date.

However it was only when the 23-year-old was sat in front of 50 guests on her wedding day in December that ‘maid’ of honour John, 26, stood up for his speech.

The bride began to ‘sweat’ with panic as John revealed Sabrina herself would say a few words, before he hit play on an excited voice note she had sent him from her very first date with Brendon.

In a video shared on TikTok, mortified Sabrina can be seen burying her face in her hands as John plays the clip of her declaring her date is ‘f***ing gorgeous’ – as his elderly grandparents listen in.

In the excited voicemail, Sabrina can be heard saying she has ‘never connected with anyone like she did with this guy’, before adding that ‘it can’t get any better’.

Sabrina, from Durham, in North Carolina, US, says: ‘My maid of honour, John, has been my best friend since college.

‘We always used to jest that I was nervous for his speech, even back in 2017, because he’s such a mischievous lad. He’s British himself and embodies the philosophy of jest and just having a good laugh.

‘I knew it wasn’t going to be good, but I’d forgotten about it.

‘Of course, in true best friend fashion, he embarrassed the living daylight out of me, in front of my friends and family, [where I was] dropping the F-bombs all over the place and calling my husband incredibly sexy in front of his grandparents.

‘I was hoping it wasn’t too incriminating because I went into a lot of detail. I was sweating.’

Sabrina admits she had tried to play hard-to-get for months when she first met Brandon, even claiming she wasn’t really looking for a relationship.

But while she had mastered a cool exterior, her hilarious message told a different story – which came as a surprise to her husband.

Sabrina was smitten when she met her now husband, but tried to play it cool (Picture: Kennedy News and Media)

‘When I met my now husband, I was very much not looking for a relationship and very emotionally unavailable after ending a bad relationship,’ says Sabrina.

‘My husband lived two hours away from me at the time and we’d matched because he was driving through the area.

‘When I saw that he was so far away, I thought, “how is that going to happen?” But I thought it’d be fun to have someone to talk to, I was feeling a little bit lonely and he was extremely good looking, so it couldn’t hurt.

‘We had been speaking for a couple of days with no intentions to meet up at all. He called me out of the blue one day, I didn’t even have his number saved or anything and he just said: ‘I have a feeling you’re really special.’

The pair ended up meeting for a breakfast date, before speding a romantic weekend together, picnicking in the park and talking for hours.

Soon, they really hit it off and Brendon stayed with content creator Sabrina most weekends.

The newlyweds on their wedding day (Picture: Kennedy News/Valiko Proskurnin)

‘We couldn’t dine in anywhere so I walked him down to my favourite donut and sandwich place, picked up the food and sat down in a park for about five hours and just talked and talked,’ she says.

‘That’s actually where he proposed only six months later, right in that same spot. We knew instantaneously that it was something very special.’

Throughout the night, Sabrina claims the DJ gave ‘sneaky’ clues about an extra guest while she celebrated with her loved ones – but admits she had no idea what lay ahead.

‘The MC who was leading different parts of the wedding came up to me and said. “okay, we have two speeches left. One of them is a special guest.”

The benefits of cooking with your partner

‘Honestly, Brendon was looking at me the entire time and I couldn’t bear to lock eyes with him.

‘He was especially amused because the entirety of the beginning of our relationship, I was playing it so cool.

‘I acted like I was very much disinterested and played hard to get, meanwhile this was my reaction from the beginning.’

MORE : The benefits of cooking with your partner

MORE : Baby survives after being born at 23 weeks weighing just one pound with an esophagus that didn’t connect the mouth and stomach

The benefits of cooking with your partner


‘Should I stay with my selfish boyfriend when he’s great with my son?’