Exploring the ‘platonic ick’: When friends or acquaintances make you cringe 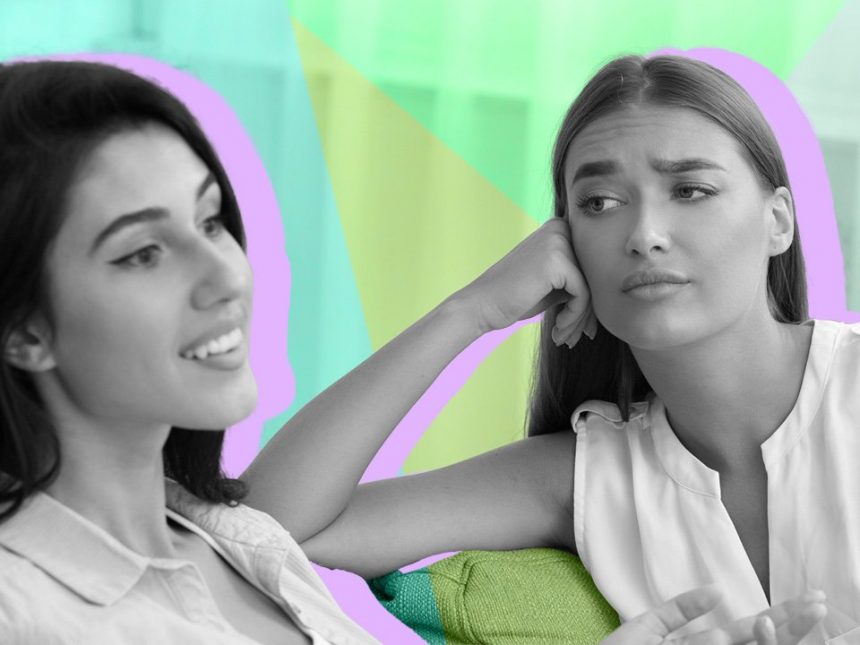 We’ve all experienced ‘the ick’ with dating — but what about potential friends, too? (Picture: Getty/metro.co.uk)

It starts with just one small, seemingly insignificant thing — from the way they end their text messages to their penchant for wearing open-toed sandals.

Maybe they still call their mum ‘mummy,’ run up the stairs on all fours, or have a photo of themselves in their bedroom.

It doesn’t matter how much you fancied them, or how inconsequential their cringeworthy trait is in the grand scheme of things: once you see their legs dangling freely on a bar stool, or they have a bit of toothpaste lingering around their mouth, you know it’s over.

Regardless of how silly it seems on the surface, if you can’t help but physically recoil at the thought of someone, you’re bound to mentally check out of the relationship.

It’s awkward, confusing, and can make you feel a little bit guilty – yet we’ve widely accepted that the ick, as random as it might be, is just part of the dating game. But what about some of the other, non-romantic relationships our lives?

Maybe in the dating game we’re allowed to be a bit more picky — but the ick doesn’t discriminate, and we need to talk about it more.

We’ve all had that moment hanging out with someone new, where a switch flips in our mind and we know this is the first and last time we’ll be seeing them socially.

And like with the ick, it can be for both hyper-specific traits that make you want to curl up in a ball and die, as well as bigger, more pronounced character differences.

Francesca Newton had her own icksperience (sorry), telling Metro.co.uk: ‘I felt it when I saw my friend’s feet.

‘I glanced down when we were chatting and then found myself at a loss for words. Super mean, I know, but some feet are just too much.’

For others, the platonic ick is more about needy or, conversely, uninterested behaviour.

‘This might be super petty, but I don’t like it when people text me to tell me they’re outside my house,’ said Billie Walker. ‘I got it when we were young and you didn’t want parents answering the door, but now it’s like, it’s gonna be me or my housemate — and I don’t always keep my phone on me at home.’

‘My ick is when I meet people and they don’t ask me anything about my life,’ added writer Michele Theil. ‘It feels like I’m talking to a brick wall.’

We’ve all had that moment the first time hanging out with someone, where we realise that we’ll never be seeing them again (Picture: Ketut Subiyanto from Pexels)

Sometimes, as with dating, these icks might serve as bigger red flags about the kind of person your potential friend is.

‘It was the way they spoke to their other friends about me,’ Georgia Cornish said. ‘They must speak about me like that.’

For Charlie Fear, it’s when people are rude to waiters. ‘Or when they pay food bills right down to the penny,’ he said.

One woman, who wished to remain anonymous, said it was people’s attitudes towards Covid vaccines rang alarm bells.

‘Finding out one of my partner’s best friends and his wife (who we see a lot) were against the Covid vaccine last year definitely gave me the ick,’ she said.

While getting the ick with potential friends is a less publicised than in romantic relations, for Therapist Sally Baker this doesn’t come as a surprise at all.

Sally told Metro.co.uk: ‘In romantic relationships, we tend to give new people more benefit of the doubt before we get the ick than we would with potential platonic friends.

‘With potential platonic friends, the margin of what most people find appealing is fairly narrow. Shared interests and shared values decide whether most people can be friends or not – so it’s easy to get the ick if a new mate turns out to be politically diametrically opposed or has differing views on a subject close to your own heart.’

She added, ‘We forgive lovers more and potentially give them more latitude before the ick finally comes. With romantic partners people often think they can influence and change a person’s views.

‘Romance causes distractions that delay the process of seeing clearly who someone really is.’

MORE : These are the seven deadly sins of dating that are stopping you finding love – which are you guilty of?

59 questions to ask on a Zoom date


11 couple games to play with your partner on date nights