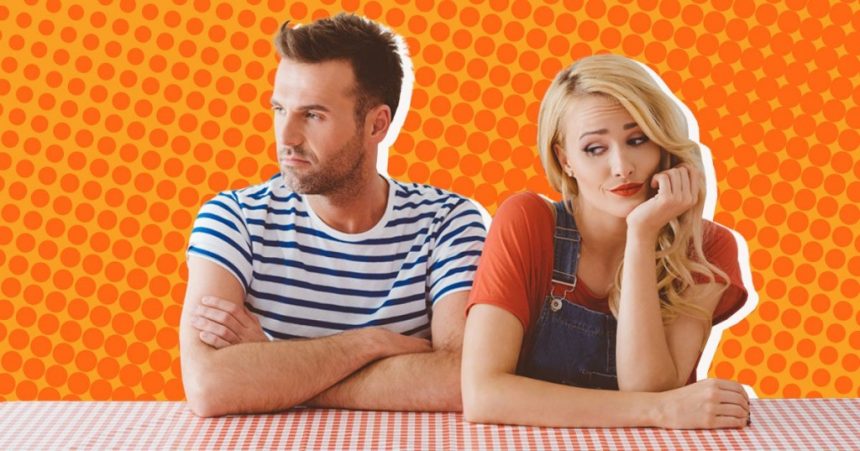 Everyone has done it at least once in their life.

You’re speaking, arguing, or even having sex with a partner, and you accidently say the wrong name. It might even be your ex’s name that’s uttered during the unfortunate incident.

We recently saw this play out before our very eyes on Love Island, when Gemma Owen accidently called Luca Bish by her ex’s name (Jacques) when he was giving her a massage.

So, fear not, you’re certainly not alone.

Relationship expert and sexologist Ness Cooper tells Metro.co.uk: ‘Calling someone the wrong name is very common and can happen between individuals who even feel they have a deep connection, such as a romantic partner.

‘It can happen even during intimate moments such as sex. It’s nothing to worry about and it’s fairly common for many couples to experience at some point during their relationship.’

So the awkward moment has happened – but what do you do next?

How do you go about playing down the situation and explaining it’s not a big deal?

Experts have shared everything to consider below.

Hannah Martin, a psychotherapist and founder of Talented Ladies Club, says that it’s actually not your fault at all – it’s natural biology.

As a result, you can always blame science.

She says: ‘According to a study led by Duke University professor David Rubin, we all “group” people in our brains based on our relationships with them. It’s why we sometimes call teachers “mum” when we are at school – they are grouped as people in a position of authority and responsibility over us.

‘And while your current partner may not like the idea of being grouped with an ex, it makes sense as they are both your significant others.

‘What it absolutely does not mean is that you are thinking of your ex, or that you still harbour any feelings for them.

‘It’s simply the wiring of your brain having a misfire at that moment and unconsciously picking the wrong name from the right “group.”’

An easy way out.

Jade Thomas, a BACP registered psychotherapist at Private Therapy Clinic, says it’s always better to address the elephant in the room – and not let awkwardness fester.

She explains: ‘Obviously, a slip of the tongue when it comes to mentioning an ex’s name by mistake can cause pangs of jealousy which, if left undiscussed and unexamined, can have a significantly negative impact on the relationship.’

So acknowledge that it was an accident, even if you laugh about it – don’t pretend it didn’t happen.

Ness also points out that this might be common if you’ve dated people with similar names (like Joe, James, John, Jack…).

She continues: ‘As long as you both recognise each other as individuals and that you’re dating each other for who you both personally are, that’s important.’

The best London events to treat dad to this Father's Day

How to train your puppy not to bark

Once you’ve acknowledged it, Ness explains the next thing to do is to reassure your partner.

‘While some people may think that being called an ex’s name is a sign they still may want to be with an ex, it’s rarely the case and often it’s just association and memory recall of strong emotions and feelings,’ she adds.

‘But reassurance is important for some after experiencing being called the wrong name.’

As a result, it’s vital to find out what works to reassure your partner and take time to listen to any of their concerns.

She adds: ‘Using empathy is helpful, like saying “I understand why you feel hurt after I accidentally called you by another name, I would feel the same way, but please understand I didn’t intend to hurt you.”

‘The tone of voice can be important and offering eye contact, as this helps make them aware that you’re present with them and not the person you accidentally called them.

‘Understand that most people will have a similar error at some point in their lives, whether that’s to an intimate partner, child, friend, or pet. It happens to us all.’

MORE : Everything to know about a relationship ‘white flag’ and what it means

MORE : Everything to know about ‘soft swinging’ – and how to bring it up in a relationship

MORE : How to feel connected to your bisexuality when you’re in a ‘straight’ relationship

Is EastEnders’ Max Bowden dating anyone and what else has the Ben Mitchell actor starred in?