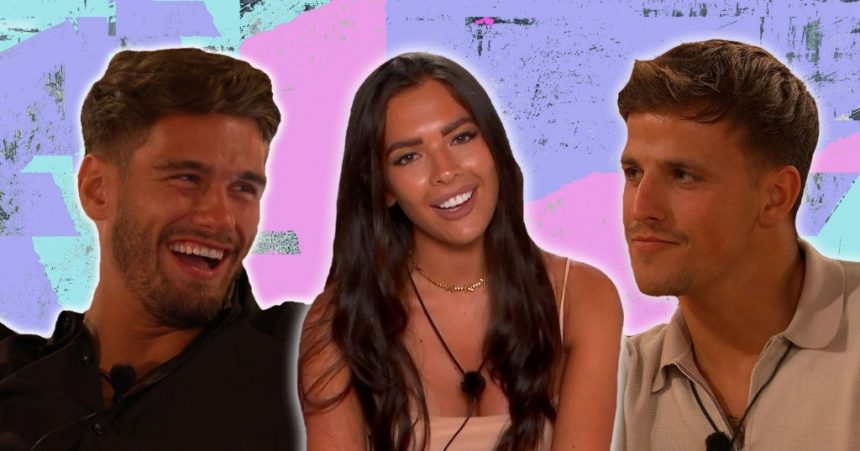 There were many reasons to cringe while watching last night’s Love Island (Davide’s failure to make Ekin-Su a morning cuppa being one of them).

Probably the most awkward, though, was when Gemma Owen accidentally called Luca Bish by her ex, Jacques’, name.

To add insult to injury, the named ex is in the villa with the budding couple, and the Freudian slip came about while Luca was giving Gemma a massage.

If a parent has ever listed off every other family member’s name before getting to yours, you’ll know the frustration of being incorrectly identified. This stings even more when it’s a partner using an ex’s name; however accidental it may be.

We’ve covered how to deal with a romantic misnomer, but you might be wondering why they happen.

Thankfully, these mishaps don’t necessarily mean someone is thinking about past loves – in fact, they don’t really mean much at all.

A study led by Duke University professor David Rubin found that we ‘group’ people based on our relationships with them. We may call teachers mum, for example, because they’re both people in authority and responsibility for us.

‘While your current partner may not like the idea of being grouped with an ex, it makes sense as they are both your significant others,’ psychotherapist Hannah Martin tells Metro.co.uk.

She adds: ‘It’s simply the wiring of your brain having a misfire at that moment and unconsciously picking the wrong name from the right “group.”’

There are also a number of contextual reasons why you might recall the wrong name; like your ex being within eyeshot of you in the very same villa.

Our brains are like filing cabinets, storing information in sections – but not always recalling the correct stuff (Picture: Getty Images)

According to Jade Thomas, BACP Registered Psychotherapist at Private Therapy Clinic, Gemma’s faux pas could simply be down to a momentary distraction.

She tells Metro.co.uk: ‘Have you ever tried to write something down while listening to something unrelated leading you to write down those unrelated words instead?

‘Or been in the middle of a conversation when your mind wanders to another situation? These examples of distraction can also explain why our brain might make an error.’

Jacques and Gemma’s acrimonious split (which has been alluded to in the show) could also have had a part to play.

‘It could be argued that the presence of Gemma’s ex-boyfriend makes her feel anxious or uncomfortable – as Gemma was aware of how the mistake would impact her current partner Luca,’ says Jade.

‘It has been suggested that part of our unconscious mind is always thinking about the worst thing or worst-case scenarios as a way of protecting or preparing ourselves for them.

‘Therefore, often the very thought we tried to suppress comes into our mind and out of our mouth.’

While we can’t know for sure what was going through Gemma’s head when she made the slip-up, errors don’t have to have a deeper meaning.

Jade says: ‘On average, people make around one to two errors for every thousand words said, so it is very common and normal to make a verbal slip.’

That said, Luca’s feelings were clearly hurt – which is also both understandable and valid.

‘Naturally we search for meaning behind behaviour and language so this might be what was happening for Luca,’ adds Jade.

What matters is whether he chooses to rationalise where those feelings come from, or blame Gemma for an absent-minded mistake.

MORE : How to recover after calling your partner by your ex’s name

MORE : Underground bunker in a Yorkshire field could be all yours for £18k


How can you spot a catfish?