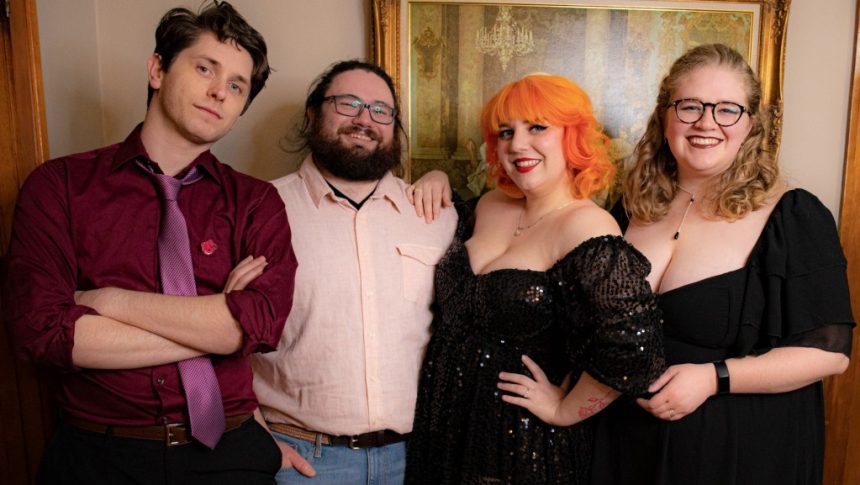 Members of a polycule have shared how they make their unique relationship work, from who sleeps where to how they deal with jealousy issues.

Unlike ‘triad’ relationships where each of the three people involved are together, a ‘polycule’ is a group of people connected through overlapping non-monogamous relationships.

Those in a polycyle may have multiple relationships at once and are free to pursue further connections, while members who aren’t romantically entangled remain platonic and friendly with each other.

Anna, 26, who does not wish to disclose her surname, is in relationships with three people, having opened up her marriage to Jake, 25, after four years of monogamy.

Based in Chicago, US, costume designer Anna has three separate romantic relationships: with Jake, Spencer, 28 and most recently, her girlfriend Ellie, 26.

She said: ‘We were at a point in life where marriage seemed like the best course of action for financial and dependency reasons.

‘We are still very much in love, but I have a whole lot of love to spare for other people as well.’

If Spencer is staying over, Jake will normally go to the sofa (Picture: Blessed Bee Photography/Mercury Pres

Not everyone in the group is in a relationship with each other, but Anna describes theirs as a ‘kitchen table style polycule’ where everybody gets along and hangs out.

Anna added: ‘I live with Jake full time, but Ellie and Spencer live in different states, and everyone has full time jobs so it’s always quite hard to schedule separate time for each individual.

‘I would love for us all to be able to live together at some point, but that’s not really a viable option right now as everyone is on their own path in life.’

Date nights between Anna and her individual partners are usually scheduled months in advance, and when it comes to staying in the same bed, that’s really up to everyone involved.

‘When Spencer comes over, Jake tends to go and sleep on the couch,’ explained Anna.

‘He gets pretty claustrophobic and likes to give Spencer and I space when we get the chance to see each other.’

Spencer said: ‘Jake also snores! But he’s a big cuddler as well, so it’s nice to chill with him as a friend and get a hug from him every now and then.’

Jake says he and Anna’s love is ‘pretty grounded’, and argues that polyamory ‘doesn’t work unless you make a point to understand the your partner’s feelings and help them love who, and how they want to.’

It’s this attitude that’s meant, according to Anna, ‘there’s never any jealousy in the relationship.’

Jake had been married to Anna for around four years when they considered non-monogamy (Picture: Blessed Bee Photography/Mercury Press)

She continued: ‘Polyamory really makes you look into your own feelings and where those feelings come from, it definitely puts a focus on dealing with things in a healthy way.

‘You can discuss these feelings with a group of people that love you and support you, rather than dumping all of these feelings on a singular person.

‘I feel like monogamous relationships carry quite heavy burdens when it comes to carrying your partners feelings and emotions.’

With such a unique relationship, Anna and her partners are no strangers to backlash and trolls, and often try to educate people via social media.

Sexual health services in the UK are 'failing Black people'

‘I’m the happiest when I know less about the hateful comments really,’ said Ellie.

Jake also added: ‘You cannot convince me that people who hate on us are older than 12, and I do not care what some random child thinks.

‘Grow up and speak to me like an adult.’

Despite the backlash they’ve received, the polycule are thriving, and have the full support from their family and friends.

Anna said: ‘All our parents have been really supportive, although they were quite unsure of it all at first, especially the logistics of it all.

‘But they can see how happy we are, and how we all support each other.’


The benefits of cooking with your partner