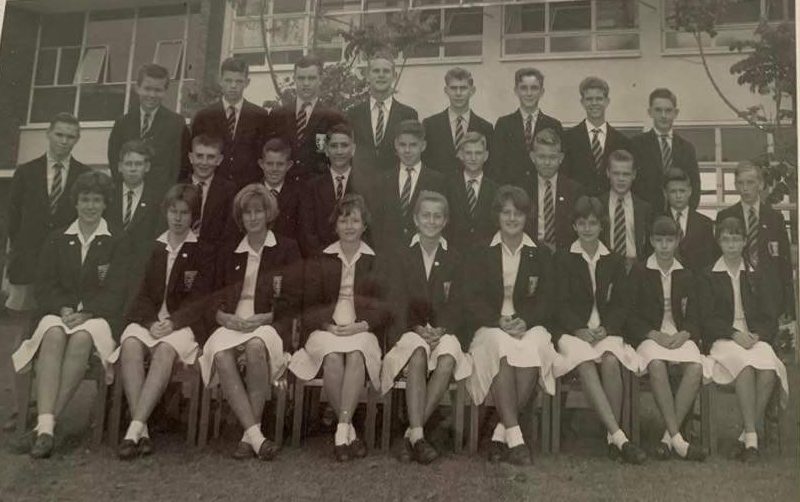 We were in the same class at school but I hardly remember him at all – I think he used to smoke behind the bike sheds and I was very anti-smoking!

We both attended a school in northern Rhodesia, now Zambia, and Andrew didn’t say much in class. He’s since told me that he used to be terrified of me as I was a prefect.

I wanted to be a journalist and trained in what is now Zimbabwe. I worked in South Africa on various newspapers, then came to the UK in 1976. I married twice – divorced my first husband and the second died from cancer, which he had when we married. I never had children.

I always kept in touch with my best friend at school and we always remembered our school days fondly.

It wasn’t until 58 years later, in our 70s, that Andrew and I started emailing when we were planning a reunion to remember our school days.

Bev, second from left in the front row; Andrew, fourth from right in the second row (Picture: Supplied)

One of my classmates from a reunion we had in South Africa in 2012 had been put in touch with Andrew and another old school friend by then, and he told them about the next one being organised in the UK.

When we got back in touch, I asked Andrew to send me a picture and I sent him one of me. I didn’t think either of us would have recognised the other. I had no idea how tall he was. He was 6ft 2in and a very nice looking man – a far cry from the geeky schoolboy I once knew.

We emailed for about seven or eight months and it gradually became more and more personal. It started off with the usual: what have you been doing for the last 58 years?

Our lives are so similar – like me, Andrew was an only child. He told me he was also married twice, divorced and then widowed. He had moved to South Africa to finish schooling and go to university. He’d been a civil engineer working in local government. I was really looking forward to seeing him again after all these years.

Initially it was just all catching up and making plans for the reunion. He said he’d always fancied living in the UK and would combine the reunion to do a recce. It was just nice chatting to someone who’d shared the same background and was so enthusiastic about everything.

Before we met up for the reunion, Andrew and I chatted on the phone. He wanted to go to Aberdeen when he arrived and I have friends in Dundee so I suggested we should get the train up together.

One of the things I loved in his emails was that, if he wrote to me later at night, he would sign off with ‘sleep gently’. This was after several months of being in touch.

That’s when I started to think of him in a more romantic light. He just seemed so enthusiastic about coming over and meeting up.

One of my school friends, who I was organising the reunion with said I might take one look at Andrew and want to run a mile – but we already had all these plans in place to go to Scotland together and then the reunion.

In March 2019, Andrew travelled to London from his home in South Africa and was staying in a ghastly hotel so he rang and asked if he could come a bit earlier than anticipated to stay with me before the reunion. I was so excited about seeing him.

When he arrived at the station, he put his suitcase down and threw his arms around me. My first impressions were how lovely he was, how warm and natural. I felt as if I’d known him for years.

We took a day trip to London – perhaps you could call that our first date (Picture: Bev Creagh)

The day after he came to stay, Andrew and I took a day trip to London to see Buckingham Palace and the sights – so perhaps you could call that our first date.

It was the most natural thing in the world. It was as if we’d always been together.

Our school reunion was in Rugby and there were 10 of us – four men and two women, who had all been at school together in northern Rhodesia, and their partners.

It was just magical. There were two people there that I hadn’t seen since our school days and we all got on so well.

Andrew and I attended as a couple – and I’d warned everyone beforehand. They were all thrilled. We held hands and he made me laugh.

In the two weeks we had together before he went back to South Africa, we went to Scotland and stayed with friends of mine in Dundee as a couple.

We talked about maybe selling my house and buying something together when he came back. And it was just wonderful having him here, as if we’d always lived together.

We continued to WhatsApp several times a day and occasionally talked on the phone. His daughter Hannah had her 21st birthday here when they came back to see if she’d like to go to university here.

I think being apart made us both realise even more strongly how much we wanted to be together.

Then, I soon went to South Africa and spent two months with them – returning once again for Christmas. All his friends were wonderful to me and told him he’d be mad to let me go – very flattering!

We had plans in place to go to Scotland together and then the reunion (Picture: Bev Creagh)

Andrew moved in with me in Hitchin in January 2020, then the first UK lockdown happened just weeks later. It wasn’t the honeymoon period that we were expecting, but it was absolutely fabulous and we got on so well.

He’s very easy to live with – he does all the domestic stuff and is also an excellent baker who makes the best shortbread and fruitcake I’ve ever tasted.

It was 16 years since my second husband had died of cancer and I’d lived alone ever since. There were no hiccups and lockdown forced us far closer together than we would have been otherwise.

We’re making up for lost time now. He’s loving the English way of life, like going to the pub and all the history around us. He says playing at the lighting of the jubilee beacon was the highlight of his piping career. He finds it all very small – cars, roads, houses.

He told me he’d never marry again as he’d made a hollycock of it twice. I never thought I’d remarry – I’d been very happy with my last husband and thought I’d never be that lucky again.

So it was a complete surprise when he went down on one knee at home and asked me to be his wife.

I don’t think either of us could have imagined how things would turn out (Picture: Laura Smith)

We got married in March, three years to the day since the school reunion that brought us back together.

We invited everyone from the reunion and several of them came. The day was absolutely magical – very emotional for us both. He married in his Ross tartan kilt and he bought me a matching shawl which I wore with my dress.

Everyone knew our story and were just so delighted to be able to celebrate such a fairytale ending.

Our guests donated £365 for landmine clearance charity HALO Trust’s work in Ukraine instead of buying us gifts. We didn’t want presents and we knew Kris, the manager of the pub where we had our reception, had already donated his Christmas bonus to the HALO Trust.

I’ve done lots for charity in the past – mainly Cancer Research UK. Ukraine was – and is – on everyone’s mind. Seeing their suffering every day on the television is utterly heartbreaking and I think everyone in the UK wants to help in some way.

We think what Putin has done and continues to do is appalling. And we have enormous respect for the resilience, dignity and courage of the Ukrainian people.

'My sister had to carry me': The accessibility problems disabled people face at festivals

The best loafers to buy now – and how to style them

Ukraine citizens have had to flee their homes and leave their loved ones – it’s hard to imagine what that must be like. Like Andrew and me, they deserve love, too.

I don’t think either of us could have imagined how things would turn out all those years ago at school.

The friend who was worried about how it would all turn out spoke at our wedding and said: ‘It’s like a Mills and Boon love story: you couldn’t make it up.’

As told to Catherine Lofthouse

MORE : How to go in for the first kiss

MORE : We had our first date at Glastonbury – our wedding was a tribute to the festival

MORE : My 6 hour first date was perfect – we talked about everything, except dwarfism


The summer of the ‘cramdemic’ – are singles too busy to date post-lockdown?