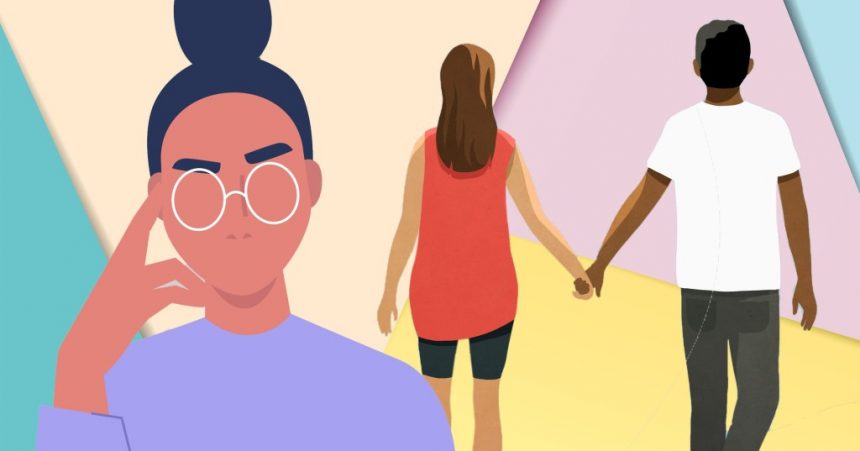 What to do if you can tell your friend’s partner isn’t into them? (Credit: Getty Images)

Your best friend is besotted with the person they’re seeing. He or she is all they can talk about. And it seems a bit one-sided.

When you’re with your pal, they seem in love and ready to fully commit while the other person appears disinterested and detached.

In Love Island we’ve seen Gemma Owen and Luca Bish couple up and… not do much else since bar a few hugs and the occasional kiss.

Eagle-eyed fans have noticed it seems as though Luca is the only one pulling weight in the relationship, while Gemma doesn’t say an awful lot at all.

‘Luca genuinely likes Gemma and i don’t like that because she puts in no effort at all,’ said one viewer on Twitter.

Another added: ‘Luca went to sleep in the dog house and Gemma ain’t make no effort to go with him. Focus on yourself King.’

Of course, we’re seeing a very edited, tiny glimpse of the couple’s relationship – so we can’t really know the dynamic.

But for many people, those little snippets of what appears to be an imbalance of affection has felt oh so familiar.

What can you do if the person your mate is head over heels for just doesn’t seem as keen in the other direction?

Gemma and Luca are ‘together’ but not currently ‘in a couple’ (Credits: ITV/REX/Shutterstock)

Senior therapist Sally Baker from Working On The Body says the the best thing to do is to ‘stay close and wait for the fallout’.

‘You’ve heard of the expression “don’t shoot the messenger”,’ she warns.

‘The problem is telling your friend about your hunch can often weaken or even destroy a friendship.

‘Few friendships can survive this kind of brutal honesty, especially if your friend doesn’t understand or accept your concerns as they are in denial.’

There’s a risk when you criticise a friend’s relationship that this might make them pull away from you and throw themselves even harder into their romance.

If this happens, they could become isolated and vulnerable – which could in turn leave them feeling segregated should everything go wrong.

Could confronting the topic break a friendship in half? (Credits: Getty Images/iStockphoto)

That’s why the best route is not to rush in and criticise, but to let your pal know that you’re there to support them, no matter what.

‘Being on the sidelines watching your friend’s relationship play out like a slow car crash is hard,’ sympathises Sally.

‘However, good friends are those that step up when you need them so it’s about being there.

‘Also, never be tempted to say I could see that coming when the betrayal or the let down happens.

‘Make it about them not about you.

‘Humility is everything as we’ve all been there and who knows what your mate really thinks about your partner?’

Think carefully: Are you willing to risk your friendship? Or will you let people make their own mistakes – and stick around to pick up the pieces if it doesn’t work out?

MORE : Love Island’s Gemma Owen wants kids next year and fans are shocked: ‘She’s not even voted in a general election’

Woman shares rules to become a ‘stay-at-home-girlfriend’, including never paying for meals or pouring own wine


After being called ‘exotic’ and ‘tropical’ on dates, I’ve got White Guy Fatigue