What to do if your partner’s a cringe poster 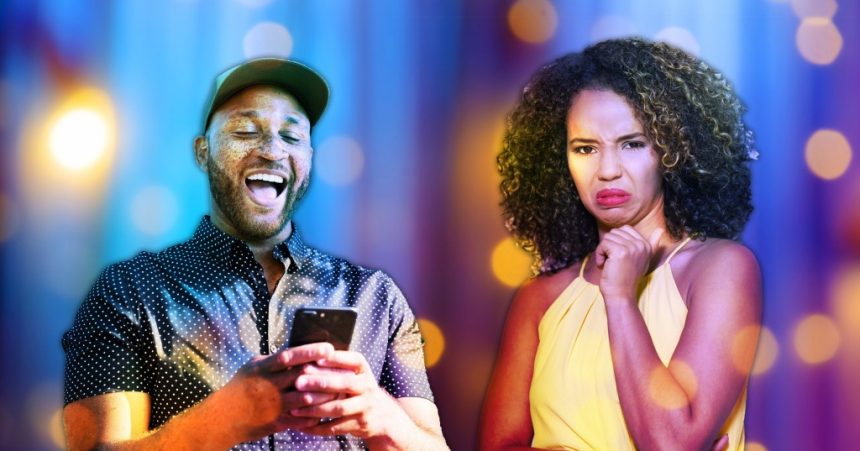 ‘Posting cringe’ is a slang term for when someone’s social media posts are embarrassing or uncool.

What that looks like will be different from person to person: perhaps overusing hashtags on Instagram makes you wince, you find inspirational quotes gross, or you struggle contain your smirks when you swipe past a smug gym selfie.

Whatever you consider a cringe post, the beauty of the internet is that it allows you to simply unfollow or block the offending user.

But what should you do if you’re in a relationship with the cringe poster?

Even if someone is kind and funny in person, their online presence can give you a bad case of ‘the ick’.

When we asked people about their icks, many of the responses were social media based. One person said they couldn’t date someone who has ‘a “photo face” or pose that they use in every photo’, while another said their icks were ‘saying lol’ and using ‘the crying laughing emoji’.

When you’re first getting to know each other, you can cut ties when you get the ick. However, if you’re already romantically entangled when you realise someone’s profile is a dumpster fire, it’s not as easy.

Hussein Kesvani, host of Ten Thousand Posts, a podcast about how everything is posting, says that there’s no single definition of a cringe post.

‘I guess it depends on your own levels of tolerance and exposure to the internet,’ he tells Metro.co.uk. ‘On a basic level, I guess “cringe” posting really constitutes any kind of post that would be better off as a direct message or a diary entry.’

We’ve all posted things we look back on as cringeworthy, but are you a cringe poster? (Picture: Getty Images/iStockphoto)

As someone who lives and breathes digital culture, you may think Hussein would be concerned about a partner’s social media presence, but that’s not the case.

He says: ‘In my case the position is always reversed, so I am thinking purely hypothetically, and I don’t think it’d be a deal breaker. I guess it depends on how much of their online persona ends up emerging in real world scenarios.

‘I do think it’d be exhausting to constantly have to make excuses for your partner saying bizarre, misplaced and kind of offensive things because they keep forgetting that they’re talking to a person, and not an avatar.’

First off, you need to establish what specifically makes you uncomfortable about your partner’s feed. Is it ‘basic’ posts or oversharing monologues that are bothering you, or something more sinister?

If it’s the former, try to consider whether your partner is really doing any harm. You can get over them posting yet another picture to Facebook of their beloved car, but it’ll be much harder for them to recover if they think you’re ashamed of them.

Hussein says: ‘Are they just overly sincere? In which case, perhaps suggesting they lock their account might be a good way to manage it.’

Approach this in a non-combative way rather than accusing your partner of wrongdoing – and definitely don’t put their interests or personality down.

Mention you’d prefer if they kept things private for safety reasons, asking if you could both lock your accounts to friends only. This way no one’s feelings are hurt, and you’ve mitigated most of the secondhand embarrassment.

It’s also worth thinking about why you’re focusing on the negative, as this can be an act of self-sabotage. Finding fault in partners over minor issues might be a pattern you use to push people away due to fear of intimacy, and this should be dealt with separately.

Look at how your partner’s social media presence impacts your relationship to see if it’s becoming unhealthy (Picture: Getty Images/iStockphoto)

If that’s not the case for you, the general advice is to not sweat the small stuff.

Dr. Pamela Rutledge, director of the Media Psychology Research Center, told Lifehacker: ‘If you don’t particularly agree with your partner’s affection for football or their love of purses, that’s just something where you’re going to have to say, “That’s their interest, and that’s part of who they are”.

‘You aren’t the same person. Good relationships aren’t when people are perfectly the same. It’s when they can come together and share.’

You can spot more problematic behaviour by how it impacts your lives offline. Bad ‘jokes’ that offend people, sharing private information on social media, or harassing and targeting users they dislike are examples of when cringe posts become scarlet red flags.

As a result of their keyboard warrior tendencies, you’ll end up apologising to those around you, justifying your decision to date someone who appears to be so unkind, and wracked with confusion over how the person you fell for could be so different on the internet.

Some people can easily distance themselves from their online persona, but traits often seep into how they treat people in real life.

When a partner’s posts make you feel uneasy, and are what you believe to be a true reflection of themselves – that’s not a digital problem.

It’s a well-worn cliche, but when someone shows you who they are, believe them.

And regardless of whether they’re lovely in person, you should still try to remember that those qualities exist in your partner. Just because they’re nice to you, they still find fun in hurting others or ignore the pain they cause in the name of clout-chasing.

What you choose to do with that information depends on the severity of the situation and whether you think they’ve been purposefully inappropriate. A misjudgement or lack of social nous can be worked on within your relationship – outright cruelty cannot.

How to become more confident doing DIY at home

What to do if you've got the ick for your job

Hussein says: ‘Try talk to them about how they might be coming off as more aggressive than they would like. Quite often in posting, a lot of the “cringey” stuff is things people do impulsively, and so how it comes off doesn’t really sink in until afterwards.

‘I think the best piece of advice, though, is to set some social rules or boundaries in order to separate posting from the real world – that could include deleting social media apps on weekends, or doing more “real world” activities that don’t require internet access.’

He also recommends programs like Freedom for couples, which allows you to block social media sites for set time periods, reducing their reliance on follower counts and ratios.

‘Ultimately, I think a lot of cringe posting really is a result of people getting too lost in digital space,’ adds Hussein, ‘which makes sense considering platforms would very much like you to treat them in that way.’

He continues: ‘Beyond breaking up with them because their posts are bad, the best thing you could do, in my opinion, is to teach them that another person actually listening and caring about what they say.

‘That’s a lot more valuable than trying to get some celebrity with a blue check to notice them.’

MORE : Expert tips for being more efficient and feeling like you have more time