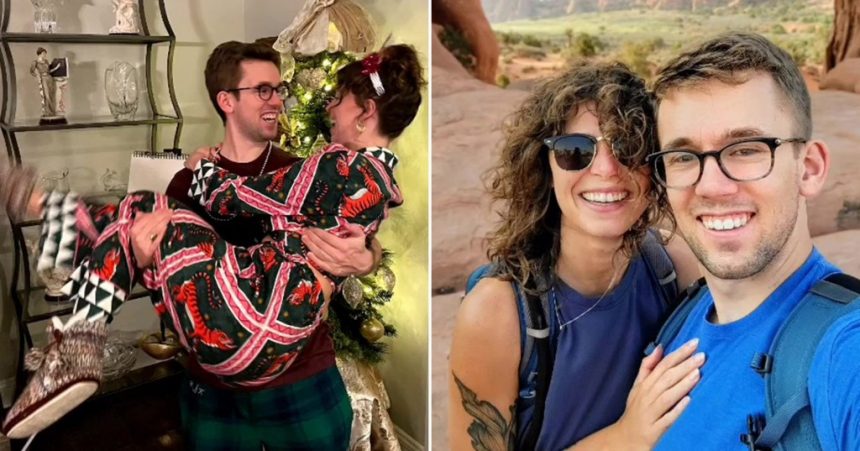 A woman has shared the story of her rom-com style secret relationship that blossomed with her colleague during the pandemic.

Holly Sandberg, a market researcher, had to hide her relationship with co-worker Cam for nearly a year so that their workplace wouldn’t find out.

The 28-year-old moved from London to New York two years ago as she wanted to seek adventure outside of her comfort zone and experience a new way of living.

Her company had an opening in their New York office for her position, so she took the opportunity with open hands.

Despite only visiting the US once, she already knew everyone in the office and found it easy to make friends.

‘Cam is a dual citizen and worked in the UK office for six months, although our paths rarely crossed there,’ Holly explains.

‘Our company moved him a couple of weeks after me and we became friends as we shared that experience of being ‘newbies’ in the office.

‘For two weeks, we would grab lunch together and spend time walking around exploring the city.

‘One time after work, we went to Central Park together and spent three hours chatting and taking pictures of the moon – it was a very new and blossoming friendship.

‘[Initially] there was no romantic attraction on either end and we were both just friendly people who got on well.

‘He’s also four years younger than me and, if anything, I saw him like a younger brother.’

Unfortunately, Holly was in the city for just five weeks when the pandemic hit.

‘We knew that flights were getting cancelled, so it would be difficult to get back.

Holly was only in New York for five weeks before the pandemic hit (Picture: Jam Press/@sunshinebyholly)

‘I thought my American adventure was done after just a few weeks.’

At the time, Cam was living with his father, Rick, in New Jersey and, as he was her only friend.

Holly’s mum convinced her to ask if she could go and stay with them.

‘I was hesitant as it seemed like a giant ask, but I eventually agreed with her and spent a long time crafting the message,’ she explains.

‘He responded straight away to say that he and his dad were talking and, if I felt comfortable, they would gladly let me stay with them for a week or so until things eased up.’

Holly believed she would be there for two weeks only and so got the train to Cam’s place.

She has been living there ever since.

Holly and Cam were placed on the same projects at work, so their schedules lined up perfectly. This meant they spent every second of the day together, even when Holly had neck surgery and recovered at their home.

They would often go on walks, kayak, spend nights cooking on the beach together and Holly says she would see Cam from the moment she woke to the minute she went to sleep.

She realised she was growing feelings for him.

‘I realised how much of an incredible person he was, as it’s rare to spend that much time with someone and genuinely enjoy every moment of it,’ she says.

‘All of my friends back home kept saying we would end up together, but I was adamant that it wouldn’t happen.

‘After four weeks, I texted my friend: “I spend all day with this man and each night I go to bed, I can’t wait to see him again the next day.”

‘A day later, his dad left the house and we both tried yoga together, where we ended up lying on the floor next to one another.

‘That’s when I leaned over and kissed him. Everything felt so right, like it was natural for us.

‘We fell in love very slowly and it was like we skipped all the dating drama, as I already knew him intimately. We were sneaking around behind his dad’s back for a couple of months, as we were still figuring out what it was between us.

‘Cam didn’t want our colleagues to know, which I respected and our friendships were intertwined with work, so we told only very few people.

‘This was so lovely, as it gave us time with no pressure to just enjoy being with one another and we were in our own little loved up bubble for a whole summer.;

One year later, Holly left the company and they finally told their colleagues about their relationship.

In the aftermath, she decided to share her story on TikTok, where she has received 2.3 million views and over 310,000 likes on the post.

In the clip, she begins by talking on the phone with the text: ‘Me: moves from London to New York then panics as I watch the whole city shut down with a global panderama.’

As the clip cuts, she re-enacts her conversation as the text reads: ‘My new American colleague: I know you’re totally alone here, do you want to come stay with me at my dad’s until this passes?’

Holly then shows a slideshow of photos from their time together, including bike rides, sitting at the beach with Cam and his father and Christmas Day.

Users were obsessed with the movie-like romance.

‘Ma’am we’re either going to need more or a movie,’ one viewer commented.

Another added: ‘What in the romcom.’

‘From the moment I set foot in Cam’s house, my life has felt like I’m living a story out of a beautiful romance film,’ Holly adds.

‘We’re at a super exciting time as my VISA is finally moving which means we can go to the UK together for the first time.

‘He’ll finally be able to meet all my family and friends and as travel is something that has been a real passion for us both, we’re planning a lot of adventures right now.’

MORE : Everything you need to know about dating an Aries


What to do if your partner’s a cringe poster