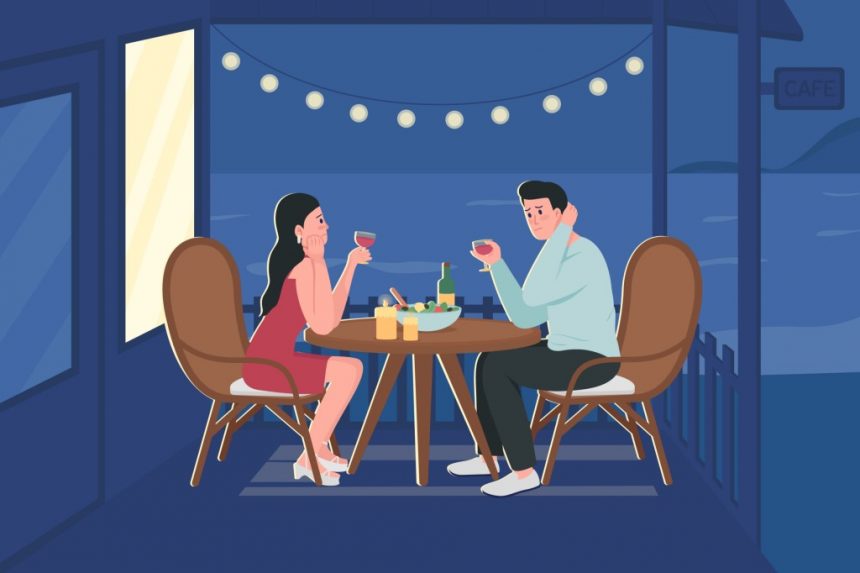 Nobody likes to admit they settle for people — but sometimes we do it unconsciously (Picture: Getty Images/iStockphoto)

We’re told that there’s plenty of fish in the sea, but what if all we‘re left with is a pond?

Maybe you’re the only single person in your friend group, the dating apps are going a bit dry, or you’re so in love with the idea of being in love that you get carried away when you find out someone likes you – even if they’re not really giving you butterflies.

Nobody likes to admit that they settle in relationships, and we don’t always realise we are doing it, but thanks to some viral TikToks, we now know that we’re not alone when we’re kind-of-but-not-really attracted to someone but decide to get into a relationship with them anyway.

‘I realised that forcing myself to like someone because I’m excited they liked me first and genuinely liking someone are two different things,’ one TikToker said in a clip.

‘I forced myself to like him and still got played,’ another user lamented.

Forcing ourselves to like people is a strange, yet universal experience a lot of us have, so we asked some relationship experts why we end up getting our hearts broken by people we had to gaslight ourselves into fancying in the first place.

There is pressure to be in a relationship

From family, to friends, or religion and even the media – it can feel like there is pressure from all angles to be ‘coupled up’.

Dana Torpey-Newman, a clinical psychologist and relationships expert, told Metro.co.uk that ‘societally, we have very unhelpful ideas about dating.’

‘We are basically programmed to believe that, unless someone engages in some type of egregious behaviour (i.e. infidelity or violence/abuse are really the only generally agreed-upon “offences”), we “should” be able to make a relationship work with anyone,’ she says.

Dr Raffaello Antonino, a counselling psychologist, added that ‘family can be an exceptionally demanding factor in this respect.’

‘Not fulfilling specific family and cultural values and expectations may create intense psychological pressure on individuals, making them feel like they’re not good enough,’ he says. ‘Dating someone you don’t feel attracted to thus becomes a coping mechanism to deal with the negative emotions experienced.’

It isn’t only family who can pile on the pressure. According to Julia McCurley, a professional matchmaker, friends can make us feel that way too – even though they might not mean to.

‘There can be a certain amount of peer pressure when you end up being the last single person in your group that hasn’t gotten married yet,’ she explains. ‘This sense of “missing out” can cause someone to loosen up their standards of what it takes to be married.

‘Everyone knows about the honeymoon period and how it wears off so it can be tempting to convince yourself you don’t have to have extreme attraction to be happily married.’

If we’ve invested a lot of time into a connection, we may feel obligated to pursue it not because we like the other person – but because we don’t want to ‘waste’ the time we already spent on them.

This, according to experts, is a psychological phenomenon known as the ‘sunk cost fallacy’, and it can happen both in casual dating and long-term relationships.

‘Although there’s nothing wrong with online dating and messaging, with more and more people finding their ‘soulmate’ in this way, it’s tough to predict whether you’ll feel attracted to someone when you finally meet them in person,’ Dr Antonino points out.

‘Things are more complicated when the online phase of the relationship has lasted very long before moving to the in-person world. Even if the attraction isn’t there, we may feel compelled to continue dating the other person.’

This, he adds, is where the sunk cost fallacy comes in.

‘In terms of dating, the Sunk Cost fallacy makes you feel very reluctant to stop dating someone, even if you’re not attracted to them, and it’s clear that breaking it off would be more advantageous, because of how heavily you’ve invested in the relationship,’ he says.

For dating expert Emyli Lovz, this applies for more longer-term relationships too – especially if the person believes that there isn’t anyone else out there for them.

‘The sunk cost fallacy compels us to stay in a relationship because of all the time we’ve already invested in it even when we know that ending the relationship would be the better option,’ she says. ‘Should we back out after having been with this person for months or years, it’ll feel like our investment was a waste.’

We have low self-esteem

If we force ourselves to like someone we aren’t necessarily attracted to, it can tell us a lot more about ourselves than it does about them. Often, according to the experts Metro.co.uk spoke to, it is linked to low self-worth.

‘When a person is struggling with self-esteem issues it is not uncommon for them to feel like they are not valuable and they have to take what they can get,’ Cinnamon Johnson, a marriage and relationship therapist points out.

Noni Ayana, a qualified sexologist, adds that ‘due to low self image, we may convince ourselves that physical attraction is trivial or unimportant.’

‘However, physical attraction can serve as a continuous excitant that draws you in and potentially fan the flames of the affection you may have for one another.’

Marissa Peer, a therapist, also said low self-esteem can play a part – but added that this might go back as far as childhood.

‘If a child didn’t receive the love they craved from a parent or loved one or has a history of bad relationships as an adult, subconscious beliefs are formed that somehow they are not loveable or worthy of being loved,’ she says.

‘Because of this, people find themselves lowering their standards or settling for something that deep down they know isn’t right, but they feel is all they deserve.’

Nobody wants to end up alone. But can that fear blind us when it comes to dating?

According to Dana, it definitely can, and can lead to us ‘tolerat[ing] partners who are just not a good match for us because being with someone can feel better than being alone.’

She explains: ‘Dating can be very exhausting and disappointing so finding someone who seems kind and willing to date you can, at times, feel like enough.’

But this desire for emotional security doesn’t just shape our dating habits – when it comes to forcing ourselves to like people, Julia said this can also happen in marriages.

‘Many people elect to marry someone who’s not physically attractive because it provides an additional level of emotional security in the relationship,’ she adds.

‘They may feel that a less attractive spouse would be more loyal, more trustworthy, and not as likely to face temptation from other men or women.’

How to communicate effectively in the bedroom – tips from an expert

Garage in Newcastle is on sale for £1.2million – but it has a surprise special feature

Marissa adds that the ‘competitive’ nature of the dating arena can make us feel ‘particularly vulnerable and exposed to rejection.’

This, she explains, causes us to develop defence mechanisms.

‘One of the ways some of us choose to do this is by searching for a “safe” option, rather than looking for what we actually want in a partner because there is a real craving for connection and a deep-rooted fear of being ‘left on the shelf’,’ she says.

‘Many of us would rather be with someone than find ourselves on our own.’

MORE : Half of UK employees ‘threaten to quit’ if they aren’t offered flexible working

MORE : So, your partner did something deeply embarrassing – here’s how to handle it