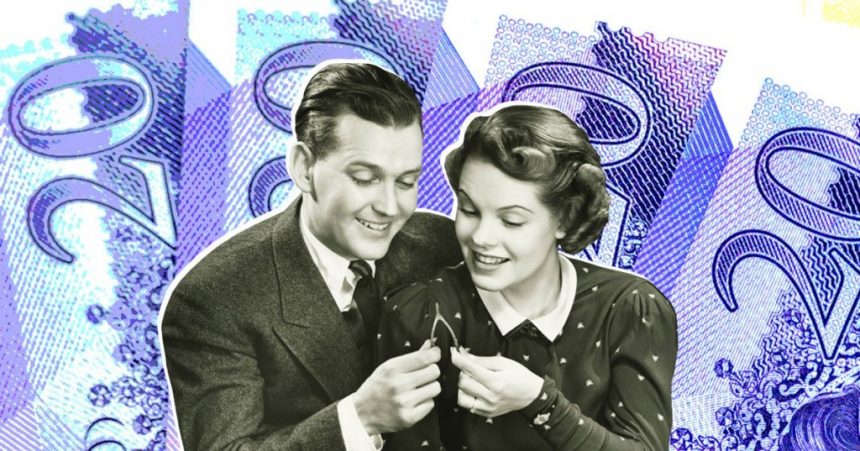 Is it time to change how your split your bills? (Picture: Getty/Metro.co.uk)

For most people in relationships, the idea of equality is a positive.

Archaic gender roles should no longer determine who does the cleaning, who is the breadwinner, or who is picking up the tab at dinner.

And, in all relationships between two people, regardless of gender – sharing the load can help to build trust, foster stronger connections and allow both parties to feel valued and respected.

So, does that mean we should be splitting everything straight down the middle? A £100 dinner bill is £50 each? £1,200 for rent comes to £600 a head? While this might be an equal division of costs, that doesn’t necessarily mean splitting it this way is always fair.

The age-old question of how to split bills as a couple is a constant topic of discussion over on TikTok, with people on both sides of the argument veering wildly into territories of gender expectations, the disproportionate domestic workload for women, even how splitting a bill impacts a man’s masculinity.

But one more rational argument that pops up again and again is that bills should be split not equally, but equitably. Meaning that however earns more in the partnership should pay more – in proportion to how much more they make.

On the face of it, this makes sense. Choosing equitability over equality may help couples to foster a better sense of fairness between them, and limit resentments in the long-term.

‘Equitably allows a couple to look at other factors that will influence how things should be spilt and the outcome will be fairer.’

Reply to @findingmimivlogs One method of splitting your bills based on income instead of 50/50!!! #moneytok #budgeting #foryou

Alex says that each couple will have different beliefs and values, so these will have an influence on how they choose to handle their finances together.

‘From an outsider’s perspective, it would always make sense to split the bills fairly. You both pay an amount that would be proportionate to your earnings, which means you’re both investing a similar amount based on the wage you earn, allowing you to remain equal,’ he adds.

What are the benefits of equitable splitting with your partner?

For Alex, when couples split things equitably, everything can become easier and less stressful.

Anyone who has been in a relationship for a long time will know that one of the key pitfalls is allowing unspoken resentments to build up. Issues around money can fester under the surface and leave people feeling hurt, upset, or a low-level sense of injustice.

‘To avoid any resentment or issues around money you need to talk about it,’ says Alex. He suggests taking time to sit down without distractions, and calmly explain how you feel and think about how things could be resolved.

‘Never hold a grudge or distract the conversation with other problems in the relationship (it’s called “kitchen sinking”) as this could lead to the other person becoming defensive and nothing gets addressed,’ he says.

‘Concentrate on what you need resolving. Take it a step at a time.

Who’s getting this one? (Picture: Getty)

When does equitable splitting not work?

Shifting the proportion of how much you pay depending on how much you earn may not entirely eliminate the possibility of resentment or unfairness.

Like with any relationship advice, it’s best to not treat them as blanket rules that can be applied to all situations. If you’re in a relationship in which you feel as though you work much harder than your partner, or if you feel like you are being taken for granted, then paying more on bills and rent is likely going to feel unfair.

‘If you earn less than your partner because you have a part-time job and spend the rest of your day watching Netflix or playing Xbox, then it might be unrealistic to expect your partner to pick up the tab for everything,’ says Robert Davies, a reltaionship expert at Condoms.co.uk.

‘Equally, if you have a part-time job or even no job because you have young children with your partner, then it may be perfectly reasonable to expect your partner to pay the bills and to foot the tab for date night.’

Ultimately, the circumstances have to work for you. Something that looks fair on paper might not feel fair in practice once all the different variables of two people’s lives are taken into account.

With equitable splitting, you’re both protected and you get out what you put in,’ Richard adds. ‘The problem is, it’s very literal – so if you have been unable to contribute more to the relationship financially due to being out of work because of young kids or other commitments, you may come out of the relationship with little or no equity – which obviously isn’t fair.’

So – you’ve had a look at your household finances and you want to give equitable splitting a shot. How do you bring it up?

We Brits are notoriously awkward and weird when it comes to talking about money, but there are ways to do it without starting an argument or causing any offence.

‘In the early stages of the relationship, if your partner wants to split everything 50/50 while earning more than you, that may be fine, but as the relationship becomes serious (you may even be living with each other), you need to address this matter,’ says Alex.

If you don’t, Alex warns it could become an ongoing problem that may lead to resentment and bring a toxicity to the relationship.

'I’m stuck in a sexless relationship with a cheating girlfriend'

‘Discuss how you can split everything equitably,’ he says. ‘It isn’t about making demands and remember, just because you think you’ve explained the problem doesn’t mean the other person has understood.

‘If they have definitely understood what you are saying, but they still won’t budge, this could be a red flag and you may have to decide if this is as partnership that will survive because this issue will never go away.

‘Relationships are all about compromise on both sides.’

Richard agrees that this can be a tough conversation, but it’s a necessary one in a healthy relationship.

‘Sometimes, total transparency can help,’ he says. ‘Lay out your income, your expenditure, and show them you genuinely cannot afford to do that they’re proposing.

‘One thing is for certain – a compromise will have to be made or the relationship is doomed.

‘There are two common compromises. The first is that the higher earner compromises on lifestyle, expenditure and outgoings in order to ensure the lower earning partner can still hit the 50/50 contribution.

It’s worth having a slightly painful conversation now to avoid a bigger problem brewing in the future.

MORE : Is getting married young the new holding off? Here are the pros and cons

MORE : There are seven types of office ‘energy vampires’ – here’s how to handle them

MORE : Half of UK single men only change their bed sheets ‘every four months’