Are you a victim of cookie-jarring? Why the dating trend happens – and what to do about it 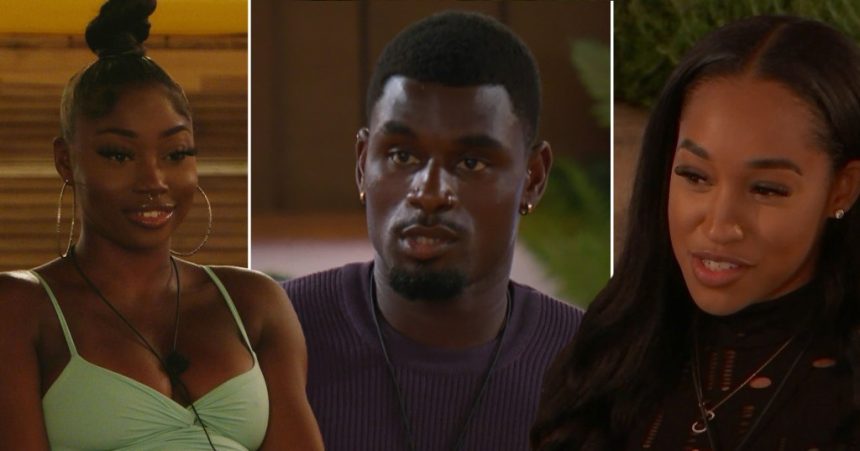 In dating, have you ever felt more like an option than a choice? Have you ever been led on with romantic vibes only to end up on the shelf?

Well, you may have been cookie-jarred.

As ever, Love Island has proved to be a great springboard for dissecting wider dating trends – look at the Dami/Indiyah/Summer drama.

After recoupling with her following Casa Amor, Dami called Summer ‘fake’ for sharing her belief that she and he shared a genuine connection. Then he went on to passionately snog her in a challenge.

While no one can know for sure what’s going on in Dami’s head but the man himself, to these dating experts, his treatment of Summer looks a lot like cookie-jarring…

Lovehoney’s sex and relationships expert Annabelle Knight, who agrees that the Dami and Summer debacle was an example of cookie-jarring, describes it as: ‘The act of leading someone to believe that the connection they share will lead to a relationship while knowing that it will not.

‘The person on the receiving end is often seen as a “backup” in case of ending up alone.’

The term implies that the jarrer will never go ‘hungry’ thanks to a supply of ‘cookies’ at their disposal.

Match’s dating expert Hayley Quinn calls the trend ‘tactical and nasty’, because it involves keeping the people in your cookie jar under the impression that there could be something more serious on the cards, rather than being upfront about where your head is at.

She adds: ‘It ultimately signifies that they are not ready, nor interested.

‘When Dami said, “Summer isn’t over yet” and decided to re-couple with Summer after Casa Amor, it sent a strong signal to her that their connection was strong enough to displace his relationship with Indiyah.’

You could absolutely argue that Dami acted this way because he was just confused about his feelings at the time – and who among us hasn’t been confused about their emotions from time to time?

‘However,’ Hayley speculates, ‘Dami’s real reason for doing this might have been, so he had more potential options competing for him in the villa.

‘When he argued with Summer about his actions, Dami refused to be accountable, claiming he was, “being friendly.”

‘It would be hard for most people to interpret kissing under the covers as ‘”friendliness”, but by minimising his behaviour, Dami was consciously trying to shift the blame, even going so far as calling Summer a “fake”.

‘Interestingly, the last person he called “fake” was Luca, after Luca commented on his behaviour in Casa Amor. It seems like when Dami is called out on his actions, rather than holding his hands up, he launches his internal conflict out on the other person.

‘Beyond Summer waiting on the shelf for Dami as an option in his “cookie jar”, this is a relationship red flag, that should show her, and Indiyah, that ultimately he’s not a keeper, nor is he ready for a committed relationship.’

Annabelle explains that context is key when you’re exploring connections with more than one person at a time.

‘Also, if you have no intention of carrying on a relationship with the person you are exploring with – and you haven’t told them this – then it is problematic and unfair on them.

‘It is arguably possible to cookie-jar someone without meaning to, as you might start exploring something with someone while not fully knowing your heart is elsewhere. If this happens it is your duty to immediately end the cookie-jar relationship, as anything beyond this point becomes intentional.’

Counselling Directory member Laura Echeverria says people might be inclined towards cookie-jarring behaviour for a number of reasons involving ego and insecurity.

After all the ‘fake’ drama, Dami kissed Summer during the Song, Marry, Pie challenge (Picture: ITV)

She tells us: ‘Often when someone continues to cookie jar they are relying on a back-up to ensure they always have someone. Ego plays a large part in all of this. Will they get rejected? How will they look? It feels good to have several people interested.

‘This often comes from a very anxious attachment style. Love, without doubt, comes with vulnerability whenever there is vulnerability, there is fear – fear of rejection, fear of what others would think, fear of being alone, even fear of missing out on someone else and in the case of Love Island, fear of being dumped from the show.

‘With Love Island and in real life, this behaviour often creates trust issues and rather than ending up with a jar full of cookies, you end up hungry and unfulfilled. With love can come great pain but also great joy, but without being vulnerable you will never really experience great love.’

Asking For A Friend: How can I deal with the emotional cost of debt?

Is there anything a person can do to help protect themselves from being cookie jarred?

Counselling Directory member Karen Schumann advises: ‘Be clear, open and honest about your commitment expectations for each other, being boundaried in your relationship from the start.

‘Be clear about what you want and ask for honesty.

‘If feelings start to develop, this could be the time to ask whether they are seeing anyone else and have in your mind how you feel about that.

‘Good, clear communication and setting expectations as you get to know someone, will help to stop any feelings of betrayal and rejection.’

Blue-stalling: When two people are dating and acting like a couple, but one person in the partnership states they’re unready for any sort of label or commitment (despite acting in a different manner).

Breadcrumbing: Leaving ‘breadcrumbs’ of interest – random noncommittal messages and notifications that seem to lead on forever, but don’t actually end up taking you anywhere worthwhile Breadcrumbing is all about piquing someone’s interest without the payoff of a date or a relationship.

Caspering: Being a friendly ghost – meaning yes, you ghost, but you offer an explanation beforehand. Caspering is all about being a nice human being with common decency. A novel idea.

Catfish: Someone who uses a fake identity to lure dates online.

Clearing: Clearing season happens in January. It’s when we’re so miserable thanks to Christmas being over, the cold weather, and general seasonal dreariness, that we will hook up with anyone just so we don’t feel completely unattractive. You might bang an ex, or give that creepy guy who you don’t really fancy a chance, or put up with truly awful sex just so you can feel human touch. It’s a tough time. Stay strong.

Cloutlighting: Cloutlighting is the combo of gaslighting and chasing social media clout. Someone will bait the person they’re dating on camera with the intention of getting them upset or angry, or making them look stupid, then share the video for everyone to laugh at.

Cockfishing: Also known as catcocking. When someone sending dick pics uses photo editing software or other methods to change the look of their penis, usually making it look bigger than it really is.

Cuffing season: The chilly autumn and winter months when you are struck by a desire to be coupled up, or cuffed.

Firedooring: Being firedoored is when the access is entirely on one side, so you’re always waiting for them to call or text and your efforts are shot down.

Fishing: When someone will send out messages to a bunch of people to see who’d be interested in hooking up, wait to see who responds, then take their pick of who they want to get with. It’s called fishing because the fisher loads up on bait, waits for one fish to bite, then ignores all the others.

Flashpanner: Someone who’s addicted to that warm, fuzzy, and exciting start bit of a relationship, but can’t handle the hard bits that might come after – such as having to make a firm commitment, or meeting their parents, or posting an Instagram photo with them captioned as ‘this one’.

Freckling: Freckling is when someone pops into your dating life when the weather’s nice… and then vanishes once it’s a little chillier.

Gatsbying: To post a video, picture or selfie to public social media purely for a love interest to see it.

Ghosting: Cutting off all communication without explanation.

Grande-ing: Being grateful, rather than resentful, for your exes, just like Ariana Grande.

Hatfishing: When someone who looks better when wearing a hat has pics on their dating profile that exclusively show them wearing hats.

Kittenfishing: Using images that are of you, but are flattering to a point that it might be deceptive. So using really old or heavily edited photos, for example. Kittenfishes can also wildly exaggerate their height, age, interests, or accomplishments.

Lovebombing: Showering someone with attention, gifts, gestures of affection, and promises for your future relationship, only to distract them from your not-so-great bits. In extreme cases this can form the basis for an abusive relationship.

Microcheating: Cheating without physically crossing the line. So stuff like emotional cheating, sexting, confiding in someone other than your partner, that sort of thing.

Mountaineering: Reaching for people who might be out of your league, or reaching for the absolute top of the mountain.

Obligaswiping: The act of endlessly swiping on dating apps and flirt-chatting away with no legitimate intention of meeting up, so you can tell yourself you’re doing *something* to put yourself out there.

Orbiting: The act of watching someone’s Instagram stories or liking their tweets or generally staying in their ‘orbit’ after a breakup.

Paperclipping: When someone sporadically pops up to remind you of their existence, to prevent you from ever fully moving on.

Preating: Pre-cheating – laying the groundwork and putting out feelers for cheating, by sending flirty messages or getting closer to a work crush.

Prowling: Going hot and cold when it comes to expressing romantic interest.

R-bombing: Not responding to your messages but reading them all, so you see the ‘delivered’ and ‘read’ signs and feel like throwing your phone across the room.

Scroogeing: Dumping someone right before Christmas so you don’t have to buy them a present.

Shadowing: Posing with a hot friend in all your dating app photos, knowing people will assume you’re the attractive one and will be too polite to ask.

Shaveducking: Feeling deeply confused over whether you’re really attracted to a person or if they just have great facial hair.

Sneating:When you go on dates just for a free meal.

Stashing: The act of hiding someone you’re dating from your friends, family, and social media.

Submarineing: When someone ghosts, then suddenly returns and acts like nothing happened.

V-lationshipping:When someone you used to date reappears just around Valentine’s Day, usually out of loneliness and desperation.

You-turning: Falling head over heels for someone, only to suddenly change your mind and dip.

Zombieing: Ghosting then returning from the dead. Different from submarineing because at least a zombie will acknowledge their distance.

This article contains affiliate links. We will earn a small commission on purchases made through one of these links but this never influences our experts’ opinions. Products are tested and reviewed independently of commercial initiatives.

MORE : I only ever ‘date up’ – is it my way of leaving my working class roots behind?

MORE : When does jealousy in a relationship become a red flag? Signs to watch out for

MORE : Love Island fans think two stars are actually having a secret off-air feud: ‘What is their issue?’


How I Do It: ‘Sex is inherently intimate – for me it’s about that connection’