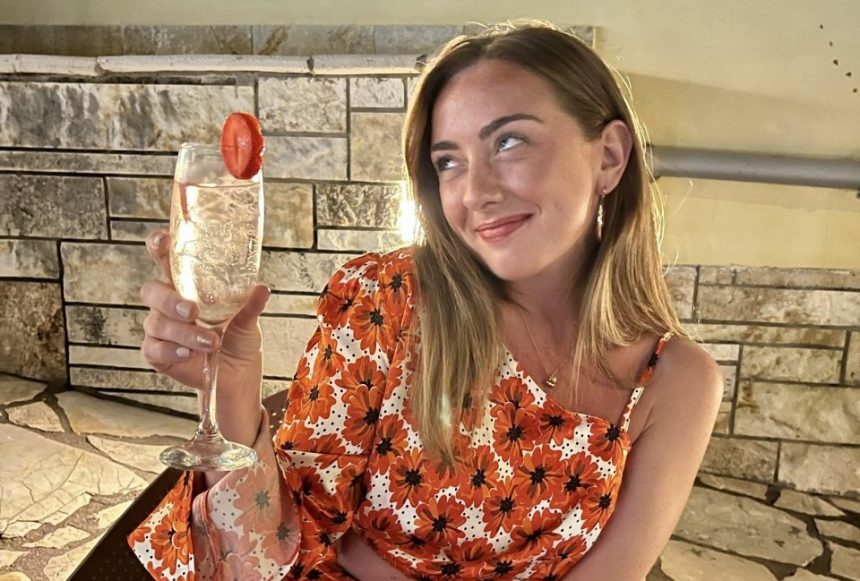 I’ve only dated men from backgrounds that bear no resemblance to my own, having been raised in a working class family (Picture: Dani McCarthy)

I’m sitting in a dimly lit room where the tables are low and adorned with candles.

Across from me is a man I’m meeting in real life for the first time; clean cut, angled face, a navy sweater I recognise as the Uniqlo number that most of the men I know own at least one of.

He’s attractive – I knew this would be the case because I’d seen his pictures.

But there are always gaps to be filled in. Finally, we get to his backstory – where he’s from and what he’s moved by. He reveals more of himself bit by bit, references to houses – more than one – and a childhood spent moving to places so far flung that I can’t get a mental image.

By the end of the date, I’m convinced he’s the most charming and interesting person I’ve ever met.

If I haven’t been clear – he was ‘from money’, a shameful trend of mine that has been the constant in my dating life.

At 29, I’ve only dated men from backgrounds that bear no resemblance to my own, having been raised in a working class family.

I thought for a brief time that it might be a coincidence, that with London becoming increasingly off-limits for people from poorer backgrounds, it could be that the pool of men is over-populated with privilege.

But recently, I’ve been wondering if this is my way of leaving it behind.

By seeking these men out and ‘dating up’, am I trying to shake off my working class roots in search of escapism, security or out of shame? It’s uncomfortable to talk about, in a society equal parts obsessed with and avoidant of conversations around money and class.

I had a loving and humble upbringing, raised in a terraced house in a part of London that is only now shaking off its bad reputation. We spent our summer holidays in seaside towns across the UK, eating chips drenched in vinegar from a cone and running around outside.

While money was tight, I don’t remember ever feeling bored or like a better life was being had somewhere else. And I wouldn’t change it – we had so much fun – except for the memories of my parents worrying about money.

Growing up in this way made me acutely aware of the power that having money yields (Picture: Dani McCarthy)

Growing up in this way made me acutely aware of the power that having money yields, and the many ways a person can feel its absence.

My dad is one of those parents that can’t hide his disbelief when we go for a coffee and he realises how much they cost now. Each month, he goes through his bank statement with a highlighter – he knows exactly what money is coming into his account, when, and the different directions each pound will need to go back out to.

He’s had to be careful with money, like his parents and their parents were, because there isn’t a safety net to fall back on. I completely admire his work ethic, the way in his late 50s he works six or seven days a week as an electrician, but I see him exhausted.

While I don’t think my parents have ever considered it could be different, more than anything I want there to be a time when their lives aren’t ruled by working just to survive.

Perhaps this is partly why I’m drawn to men time and again that are from a different socioeconomic class to how I was raised. There is an undeniable comfort to it – the idea that there’s some insurance of safety.

The question of money is always a factor in decisions that I make. I’ve spoken freely about this with the men I’ve dated – at times, it’s been an education for us both to find out more about the other ways that people live.

There’s the common personality traits that they share – relentless confidence, a total lack of anxiety, an explorative and curious approach to living, and complete courage in their convictions, a sense of freedom without restraint.

In my mind, the sum of these experiences has shown me what I’ve always been sure of. That it isn’t so much about class, but that money can solve a lot of the problems we face.

My dad is one of those parents that can’t hide his disbelief when we go for a coffee and he realises how much they cost now (Picture: Dani McCarthy)

The first time I visited an ex-boyfriend’s family home, I was so taken aback by how grand everything seemed. Day-to-day life was like one big party. Sometimes it felt like research, like looking at a group of exotic animals.

It’s a similar intrigue to what keeps us as a nation glued to franchises like The Real Housewives – these lives that perplex, that we can’t reach or look away from.

It’s like I’m looking over the fence to the other side or a visitor in someplace that’s exciting, a bit uncomfortable, and temporary. It isn’t as simple as jumping the fence. There’s that saying that’s thrown around, that wherever you go, there you are.

I think this is what I’ve realised about ‘dating up’ – that no matter who I date, and how different a life with them could be, the secret doors it could unlock, the way I was raised never leaves me – it’s who I am.

There are some flowers and plants that can grow new roots and still thrive. Thinking about it now, I suspect I was trying to imitate this myself – shedding my roots to see who else I could be, someone without a personal history to ground them.

As I turn another year older, there’s no grand plan of falling in love with someone that takes a specific shape. But there’s a deeper understanding of who I am, and an appreciation for all that made me. I’m grateful for it all.

MORE : We meet sexual partners through friends more than via dating apps – but the gap is narrowing

MORE : 12 signs you’re dating a player – and how to handle their games

Hot weather dating tips: From sun safety to feeling your best in the heat


Are you a victim of cookie-jarring? Why the dating trend happens – and what to do about it