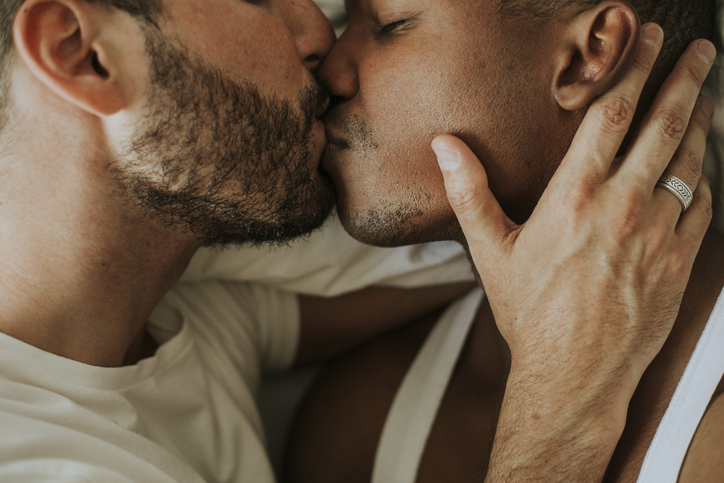 It’s important that the show takes the time to get things right (Picture: Getty Images/iStockphoto)

Move over Love Island, there’s a new kid on the block. He’s here, he’s definitely queer, and he’s called I Kissed A Boy.

Commissioned by BBC Three, the new dating show will take 10 single men abroad, coupling them up before putting them through their paces in various challenges. Sound familiar? It is – except for one big difference: all the contestants are men.

On meeting their matches for the first time, the couples will immediately kiss (hence the title) – though they’ll undoubtedly lock lips with others throughout the 10-episode run.

Celebrations on social media are justified – a primetime, queer inclusive dating show has been notably missing from schedules – but it’s also important that the show takes the time to get things right. If the contestants are treated with care and respect, it could prove groundbreaking for reality dating programmes, which are becoming predictable.

While there are some trailblazing LGBTQ+ inclusive dating shows such as The Bi Life and Are You The One?, they sit behind paywalls on streaming services, rendering them inaccessible for many audiences. Other dating shows seem to include LGBTQ+ contestants as an afterthought, or a box-ticking exercise.

As the first mainstream show of its kind, I Kissed A Boy – which is a working title – will place its gay and bi contestants at its heart and use them to its advantage. By creating a pool of men who could all be interested in each other, the opportunity for straying eyes multiplies (as does the likelihood of juicy drama).

Plus, it’s hosted by gay icon Dannii Minogue – what’s not to like?

ðŸ’• Who loves LOVE? If you are ready for LOVE, come join me, @bbcthree & @twofourtweets for â€˜I Kissed A Boyâ€™ ðŸ’‹ (working title) a dating show that will follow 10 single gay men looking for LOVE. pic.twitter.com/M1DtOyfbu2

However, there’s a sense of trepidation alongside the excitement: the show runs the very real risk of reinforcing damaging stereotypes of body image, hyper-sexuality and promiscuity.

Similar shows such as Love Island have come under fire in recent years due to the lack of body diversity on display. The freshly-waxed men all flaunt their bulging biceps and washboard abs to the cameras – presenting a very specific image of masculinity deemed to be the most attractive to audiences at home.

Such a lack of body diversity disproportionately affects members of the LGBTQ+ community, with recent studies finding that 56% of gay and bi men feel anxious or depressed because of their body image (compared with 33% of those that identify as heterosexual).

Muscly men are not only present in dating shows: they seep into gay culture through all media, with their desirability often defining the self-worth of gay and bi men. Either they strive to achieve these unattainable body types or risk ending up alone.

A recent survey revealed that 84% of gay and bi men feel intense pressure to have a ‘good body’, with 18% of gay boys and 13% of bisexual boys experiencing eating disorders (in comparison to just 3% of their heterosexual counterparts).

While there is the danger that I Kissed A Boy will fall into the same trap as other dating shows, it would be exciting for the show to feature a more diverse mix of body types.

Of course, a muscly man is easy on the eye – but wouldn’t it be even better to see him fall in love with a shy trans man, or at least someone who’s familiar with a chocolate digestive? In an ideal scenario, their looks wouldn’t matter at all.

Historically, the representation of gay and bi men in media has been either as entirely sanitised and sex-free or seedy, sleazy and sex-obsessed. This damaging dichotomy has roots in the AIDS crisis, where gay and bi men were scapegoated for the spread of the deadly virus and were viewed by society as promiscuous sexual deviants.

Presenting diversity onscreen isn’t just about changing hearts and minds by normalising queer experiences, it’s also a chance to show the LGBTQ+ community as it is

Today, the prevalence of apps such as Grindr among the LGBTQ+ community continues to reinforce the idea that gay and bi men are all promiscuous: interested in sex rather than romance.

While all dating shows rely on initial couplings, the immediate kisses that give this new format its working title provide an unexpected twist, but perhaps also a sign of things to come.

Of course, grown men kissing each other is nothing new: but we should be hesitant in promoting a hyper-sexualised image where gay and bi men are seen to engage in sexual activity that bolsters the stereotype that they are fleeting, or shallow.

While it’s important to note that promiscuity is not necessarily a bad thing: many people (of all sexualities) enjoy transient romantic and sexual encounters over monogamy. However, for many this stereotype is frustrating as it forces them to straddle two worlds: they can be either romantic or sexual, but not both.

I Kissed A Boy will need to tread a tightrope between representing its contestants authentically, neither reinforcing damaging stereotypes nor shaming those for their desires. While this responsibility may seem intimidating, it’s also extremely exciting.

Imagine a cast that is diverse not only in body image but also in outlook: a promiscuous man falling for someone seeking a monogamous Mr Right is sure to create explosive drama but also provide much-needed conversation and representation.

Alongside the chaos that we all crave from reality TV, I Kissed A Boy has the potential to rewrite how gay and bi men are presented in media. Diversity onscreen isn’t just about changing hearts and minds by normalising queer experiences, it’s also a chance to show the LGBTQ+ community as it is – shedding shame and celebrating our differences.

There’s ample opportunity to feature contestants from all walks of life, each with different outlooks on dating, sex and romance. It would be radical to see a group of men with diverse body types feeling sexy and desirable in their own skin, allowing them the freedom to be both fleeting and romantic, silly and serious.

The responsibility to ensure a rounded (but not exploitative) representation of gay and bi men is a heavy burden, but it’s also an exciting one.

If they get it right, I Kissed A Boy could be truly revolutionary.

MORE : LGBT Love Islanders don’t have to be a ‘logistical difficulty’

Dannii Minogue to host monumental new gay dating show called I Kissed a Boy and, we cannot stress this enough, what a hun


Speed dating is back – after lockdown, is it any wonder?