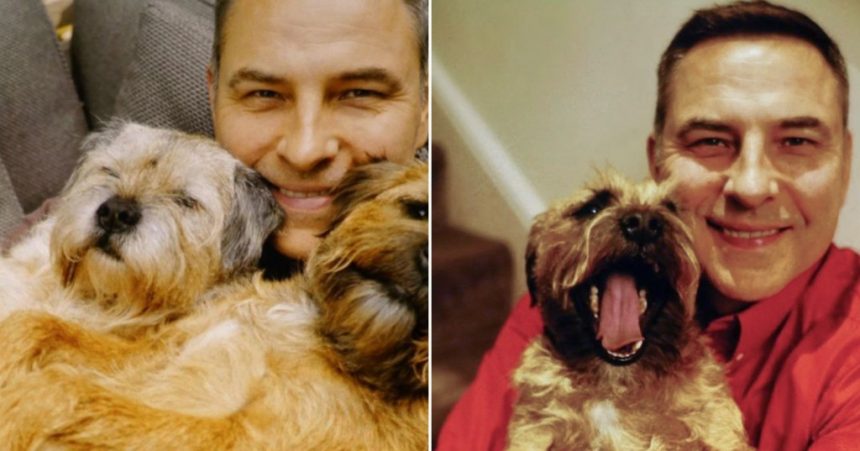 David Walliams has signed up to celebrity dating app Raya, according to reports (Picture: David Walliams/Raya)

The Britain’s Got Talent judge is supposedly using selfies of him and his adorable Border Terriers, Bert and Ernie, to help increase his chances on the exclusive members-only platform.

Raya is one of the most popular dating apps for the rich and famous, with stars like Ella Henderson and Simone Biles finding love on the site.

In a couple of snaps shared by The Sun, the comedian, 50, is cheerfully posing for the camera while rocking a red shirt, while another snap sees David donning a black suit with a white pocket square completing the look.

While some believe the TV personality is simply expressing his love for his pets, some think the comic might be using the ‘dog is a man’s best friend’ term to his advantage.

‘Obviously, David recognises there’s a certain appeal to his cute pets and has put them front and centre many of the pictures. In some of them you can barely even see him,’ a source told the publication.

David was previously married to model Lara Stone. The pair said ‘I do’ in May 2010, and Lara gave birth to their son Alfred, who is currently David’s only child, in 2013.

The couple initially agreed to a trial separation in early 2015 and before the end of the year David filed for divorce, citing Lara’s ‘unreasonable behaviour’.

At the time of the divorce, a source said: ‘Everyone thought the marriage was strong. David is used to hiding his emotions with comedy because that’s what he’s always done.’

When discussing his sexuality in 2013, he told Radio Times: ‘I think it’s all about falling in love with the person and that is overlooked, really. I hate it when people ‘confess’ or ‘reveal’ their sexuality and also things can change for people over the years.

Metro.co.uk has reached out to Raya and David Walliams’ reps for comment.

MORE : Britney Spears is officially writing a book after conservatorship ordeal and we predict an instant sell-out