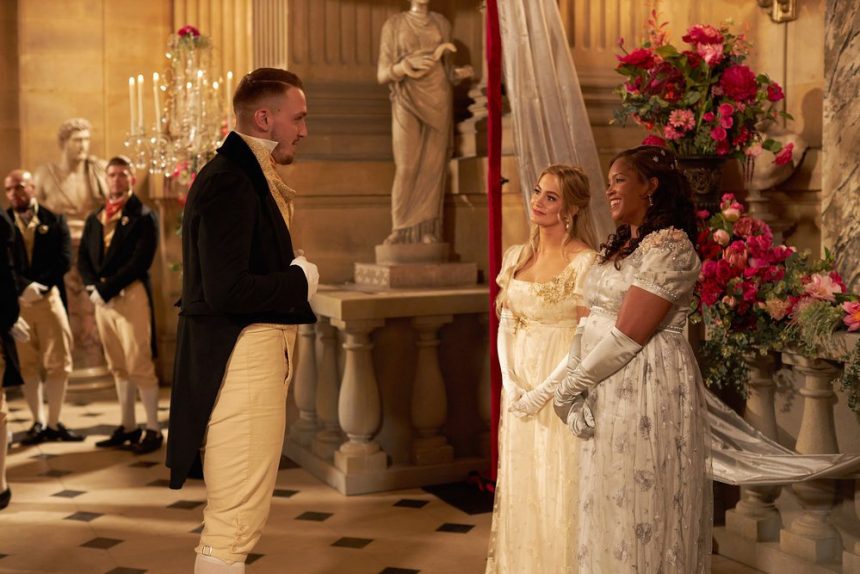 If you ever wondered what a Bridgerton and Love Island crossover would look like, well here it is, as NBC have released several photos of the brand-new dating show The Courtship – inspired by the Netflix hit.

The Courtship will see Nicole Remy being waited on hand and foot by 16 young men from all over the world, but only one will secure the date at the end.

And the term ‘Netflix and chill’ certainly won’t apply with these singletons as they’ll be going old school and actually doing their best to woo the lucky lady with archery, ballroom dancing, and wait for it, handwritten love letters.

In order for the contestants to fully embody their Duke and Duchess status, everyone involved is staying at Castle Howard in North Yorkshire, England, where they will be rocking period dress attire and participating in Victorian – era style activities.

‘We’re in a fairytale and I’m ready to fall in love, modern dating is just not working,’ said Nicole in the official trailer.

The promo shows TV presenter Rick Edwards commenting on their every move as they enjoy garden party dates, horse riding, and yes, even Nicole’s parents will be ready to give their seal of approval over the potential young suitor.

At the centre of it all is software engineer Nicole, who insists she’s looking for ‘more etiquette and chivalry.’

The arrival of the reality series was inspired by the romance show Bridgerton which followed the eldest daughter Daphne Bridgerton’s, played by Phoebe Dynevor, journey to finding love.

An astonishing 82million households tuned in to watch the series which also starred Nicola Coughlan and Rege-Jean Page, and as season two premieres in a month’s time, we can’t wait to hear the scandal from notorious gossiper Lady Whistledown.

Looks like Nicole is set for a good time with these lot (Picture: NBC)

As a special Valentine’s Day treat, the streaming service released the official trailer for season two, which premieres on March 25, and this time round, all eyes will be on Lord Anthony Bridgerton (Jonathan Bailey) as he attempts to settle down.

Who is Anna Delvey's ex-boyfriend Chase on Inventing Anna and is he real?

He wrote: ‘That’s a wrap on Season Two! So proud of this cast and crew who brought their A-games to work each and every day in this very challenging year. And these two in this photo with me right here. Words are not enough. Coming in 2022.’

The Courtship premiers on Sunday March 6 at 8pm on NBC


‘Men only seem to want me for sex – is there something wrong with me?’