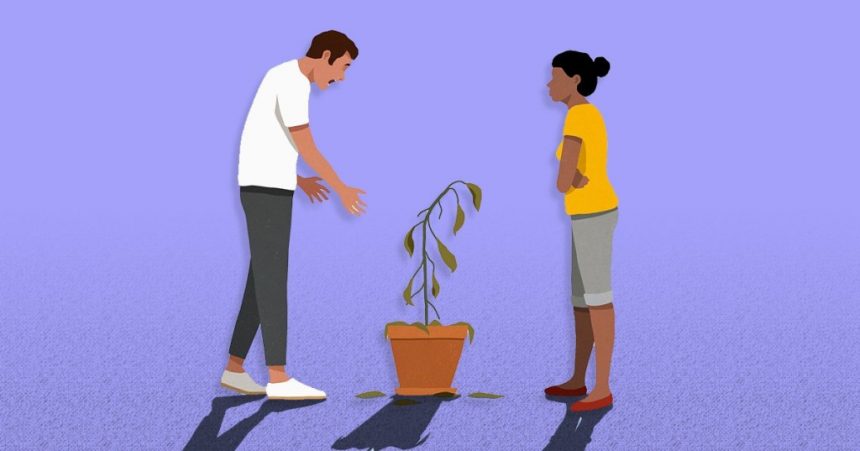 Finding someone you want to do life with is exciting.

You may be planning holidays together, moving into the same home, getting a pet, thinking about spending the rest of your days with one another – two equal parts making up a beautiful, whole relationship.

But what if it’s not so equal?

It’s common for people to naturally fall into different roles in a relationship, but if one person seems to be taking the brunt of the responsibility for things like chores and planning, it can feel frustrating.

It can show up as things like having to make a list for your partner every time they go shopping, even though you get the same foods each week.

Or maybe they refuse to cook because they ‘don’t know how to do it as well as you,’ or when they wash the dishes the plates are still dirty and you find yourself being forced to complete the task yourself.

While this could be a genuine lack of competence, it could also be weaponised incompetence – which isn’t something you should have to put up with in a relationship.

What is weaponised incompetence?

Dipti Tait, a clinical psychotherapist and relationship therapist tells Metro.co.uk that weaponised incompetence is when a person ‘gives the impression of inadequacy and helplessness to get out of doing certain tasks that they don’t want to do and in some cases to purposefully do it badly so that they are not asked or expected to do the task.’

This leaves the other person to pick up the slack and, if not addressed, can create unhealthy power dynamics.

‘It will create a serious imbalance of shared responsibility and work load which in turn can lead to resentment, anger, hostility and increased self doubt and damaged self esteem and eventually burn out,’ says Dipti.

She says weaponised incompetence is especially damaging if it is done with intention.

‘This is a form of gaslighting and bullying,’ says Dipti.

‘Over time, it will damage the other person’s self-esteem because their own self-doubt will be encouraged to keep this unhealthy power dynamic going.’

Can you tell the difference between weaponised and genuine incompetence?

Clearly, if a partner is purposefully getting things wrong in order to get out of doing chores, that is bad.

But how can you tell whether someone is using weaponised incompetence or if they genuinely lack the skills to help out – and, importantly, does it matter?

According to Dipti, there are some telltale signs that show whether or not your partner is using weaponised incompetence.

‘One example is when your partner states they are unable to do certain tasks at home and you know that they have been very competent at completing the same tasks elsewhere,’ she says.

In relationships where both partners are able-bodied and able-minded adults, there is no reason for incompetence to be used as an excuse and if your partner really wants to help, they will learn.

‘Boundaries need to be set by the partner that feels that there is this imbalance,’ says Dipti.

‘It’s always about recognising that the investment of time, energy and effort in a relationship needs to feel balanced.

‘We have moved with the times into equal partnerships with shared responsibility and if that is something that your partner and you cannot agree upon, then there is a definite issue that needs to be resolved.’

However, Dipti notes, there may be times and extenuating circumstances where it is necessary to take up the slack, such as if someone falls ill.

‘This again, needs to be agreed upon to prevent the feelings of imbalance and injustice,’ she says.

How to speak to your partner about an imbalance of responsibility

Whether it’s intentional or not, no one should have to deal with a power imbalance caused by a lack of competency in a relationship as this will lead to resentment.

‘Resentment leads to anger, intolerance, and feelings of being put upon,’ says Dipti.

Dipti suggests communicating the issue with your partner calmly and compassionately.

‘If things are said in anger or in a hostile way, there is usually not much room for peaceful negotiation and the problems can get exacerbated,’ she says.

‘In a healthy relationship, once the matter is aired, a sensible conversation can be very useful to readdress the balance of shared responsibility.

‘No one in a healthy and loving relationship really wants their partner to feel put upon or burdened, so it can usually be solved with a calm conversation.’

MORE : Asking For A Friend: Is it okay to have crushes while you’re in a relationship?

MORE : No sex and knackered or the secret to spicing up your relationship? What it’s like to sleep separately from your other half

MORE : How to know when it’s time to end your relationship


I’m looking for the man of my dreams – are you the one?