These are the things that officially give us the ick 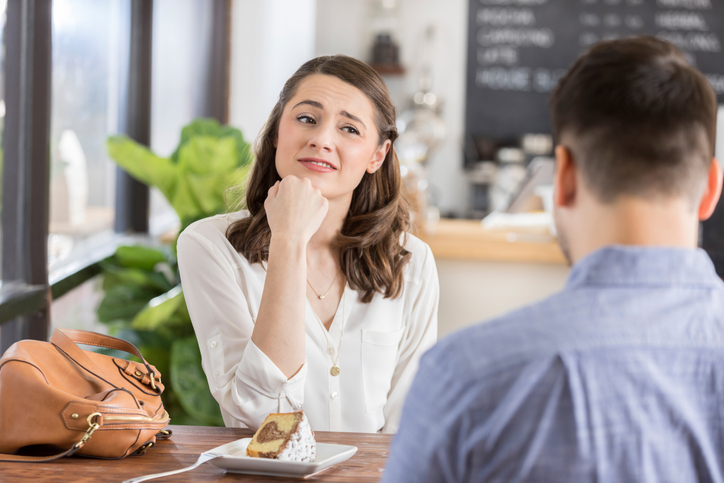 Women typically got the ick within a month of dating, whereas for men it could be after a year or more (Picture: Getty Images/iStockphoto)

The ick: that horrible moment when someone you previously had your eye on does something that you simply can’t get past.

Although the term may be a new one, the idea that ‘small’ traits and habits can immediately turn you off is a tale as old as time.

What constitutes an ick constitutes is different from one person to the next. When we asked people theirs, responses ranged from wearing trainers without socks to poor spelling to eating Wensleydale cheese.

A new study by self care and pleasure brand WooWoo has found that one in four of us have had the ick, as well as the common themes that are guaranteed to put off a potential beau.

The survey revealed that over a quarter of women fell foul of the ick within one month of dating, whereas men took a bit longer, with over a quarter saying they were icked after a whole year in a relationship.

The top turn-offs were also split by gender. These are what men said gave them the ick most:

For women, the same things popped up, but with a more conclusive response and in a slightly different order:

Male respondents were more likely to power through an ick – 34% compared to women at 24%. Over one in ten (12%) who worked through it are even still in a relationship with that person.

Interestingly, although 47% of women said they felt awkward or that their body was a disappointment, almost the same amount of men declared that they weren’t concerned about looks in the bedroom – for them the most important part was how the act felt.

WooWoo founder Lucy Anderson commented: ‘We were absolutely fascinated by the results and delighted to hear that men are willing to work so hard at a relationship even if they feel some of the attraction has started to wane.

‘However, it’s no surprise to see the top three reasons why one member of a couple might be getting the ick.’

Dating expert, Anna Williamson, also adds that it doesn’t need to be the end of a relationship, and an ick can be a chance for you to grow as a couple.

What I Rent: Scarlett and Xandice, £1,050 a month for a two-bedroom flat in Brighton

She says: ‘Work out what it is that’s making you feel that way and then have an open conversation.

‘For example, if you don’t enjoy their chat up lines, gently tell them. If it’s their personal hygiene, it really doesn’t have to be awkward, use it as an opportunity to jump in the shower together.

‘It is hard to hear though that women still don’t have confidence in themselves – but remember just because you don’t see yourself as sexy doesn’t mean someone else doesn’t.

‘Work on your own self esteem first and then set out what you want from the dating scene. Trust me, there is nothing more attractive than a woman who is honest and authentic.’

MORE : Stray dog refuses to leave pregnant canine’s side after she’s hit by a car

Psychologist shares five signs your relationship is over


Can a relationship without initial physical attraction ever work out?