Woman conned out of £80,000 by Bitcoin scammer using photo of Latvian politician 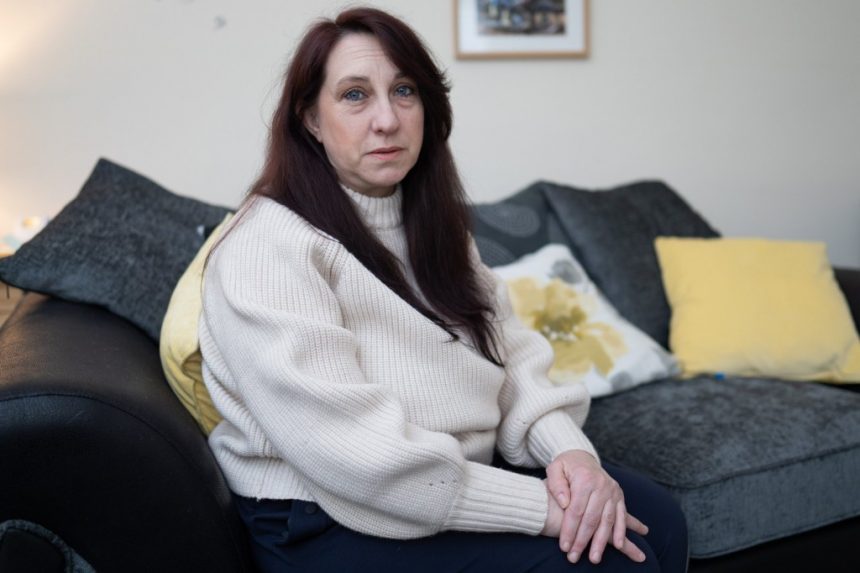 Sharon Bulmer from Manchester is sharing her story to prevent others from falling for a romance scam (Picture: SWNS)

A woman ended a 29-year relationship and was tricked out of £80,000 after being scammed by fraudsters using photos of a Latvian politician.

Sharon Bulmer thought she was chatting to a US soldier but the 51-year-old was swindled out of thousands when the man, called ‘Murphy Townsend’, turned out to be non-existent.

Authorities in Latvia say they are aware of more than 100 fake profiles featuring photos of Mr Pabriks and have been ‘facing this situation for a long time’.

‘Muphy’ first contacted Sharon, who lives in Manchester, in 2020, when he sent her a Facebook message claiming he was ‘lonely’.

The person behind the account claimed to be a 56-year-old man from Washington DC, with a 17-year-old daughter called Helen.

Murphy told Sharon he was serving with the 37th Infantry Brigade Combat Team at Base 29 in Raqqa, Syria.

But, over the course of two and a half years, Murphy swindled Sharon out of almost £80,000 after repeatedly asking for money to pay for medical bills and tickets to visit her.

The Latvian defence minister, Artis Pabriks, whose picture has been used on around ‘100 fake social media profiles’ (Picture: EPA)

‘He asked me to help him and I did, but over the time it’s got me into huge debt and because I have fallen for this person,’ Sharon said.

‘I just wanted to help him so much. I know I have been a fool but these are the things we do for love.’

The scam unravelled when Sharon contacted US authorities and was told there was no ‘Murphy Townsend’ on their records.

When ‘Murphy’ first contacted Sharon in May 2020, they exchanged a few messages before swapping email addresses and moving the conversation over to Google Hangouts.

‘Murphy was sweet when I first met him, nothing at all made me think anything different about him,’ Sharon said.

‘He was very interesting when I kept talking to him.

‘I felt loved in a way, I felt cared for. I think it’s because he’s an older person, he had an older head.’

At the time Sharon was in a relationship with a man she had lived with for 29 years, and with whom she had two children but they split up in August 2020.

‘I fell out of love, I wanted more and that’s where Murphy came in. He promised me the world and god knows what else,’ she said.

Murphy’s first request for money came in September 2020 when he asked if he could visit Sharon in Manchester.

Sharon hasn’t told her family the extent of the scam (Picture: SWNS)

She said yes and Murphy asked her to send him £1,400 for his flight, requesting the money be sent in Bitcoin as ‘it was the safest way to do it’.

But after not hearing from Murphy for a few days, she received a message from a different email address, but also with the name Murphy Townsend.

The account asked for another £15,000 for a plane ticket and, believing it was Murphy, Sharon paid up.

At the end of the month, she received a message from someone claiming to be a doctor who said that Murphy had been taken into hospital.

Believing Murphy was injured, Sharon didn’t ask which hospital he was in but didn’t contact him until he messaged her in October.

‘He wanted to know where I’d been when I’d not been in contact with him. That’s when I told him I’d been scammed by someone else using his email address.

‘He couldn’t believe it,’ she said.

Murphy then asked Sharon for help with medical bills and, after telling her he wanted to move to Manchester to be with her, weekly sums of money to pay for administration fees.

In August last year, after weeks of transactions, Sharon asked Murphy for a picture of him, he sent her a screenshot of photos from the Facebook profile of ‘Mike Douglas’.

When Sharon queried this Murphy said he couldn’t use Facebook because he was ‘on a mission’ and then that his account had been hacked.

Including a £900 transfer made last week, Sharon said she has paid more than £80,000 towards what she believed was getting Murphy out of Syria to see her, and is now in £37,000 worth of debt.

Despite never having a video call, Sharon never questioned Murphy’s intentions until she asked for proof of his medical assessment from a doctor.

Murphy sent her a copy of a letter from ‘Dr Abdulrahman Alomair’, a paediatric orthopaedic surgeon.

He also sent a letter from Al Mouwasat University Hospital that said he had been in a traffic accident in September 2020 that he is currently in intensive care.

Now, after realising she has been scammed, Sharon wants to share her story to prevent others from becoming victims of romance fraud.

She said: ‘I want to help anyone out there to not be taken by these idiots and just try and get on with my life.

The Latvian Defence Office confirmed it was aware of the continuing issue of identity theft involving the defence minister Artis Pabriks.

A spokesperson said: ‘So far, we have collected and reported to Facebook more than 100 fake accounts, but the response has been negative.’

This Valentine’s Day, I’m giving up dating apps and looking for love in unconventional places


How to protect yourself from romance scams and dating fraudsters