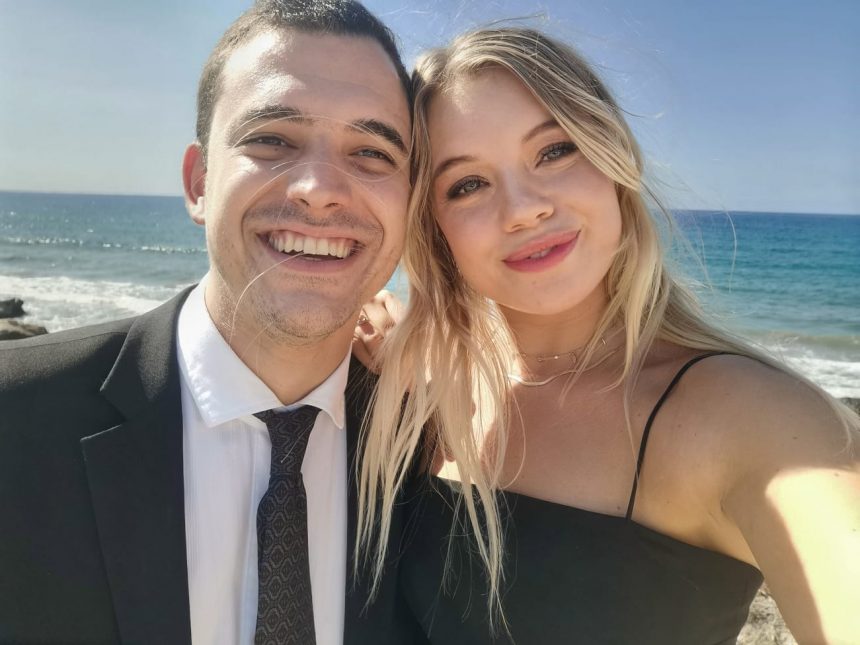 Danny seduced Sandy, Elio called Oliver by his name and Johnny swept Baby off her feet.

Anyone who has had a summer fling will know that a truly great holiday romance can leave you with far more than a dodgy tan line and a bloat from too many margaritas.

Whether that initial attraction can last the distance is the question posed by the TV show Language of Love, the finale of which aired last week on Channel 4.

As a Scot living in Spain with an Andalusian boyfriend and practically no Spanish, I know that it can.

Hosted by Davina McCall, the show places unlucky-in-love Brits in a Spanish villa with some hot locals.

The only catch is that – unlike our favourite onscreen summer flings – they don’t speak the same language.

While the series hasn’t had the same runaway success as Love is Blind, another dating show that places ludicrous obstructions on contestants looking for love, Dame Davina’s show has won over my heart.

I matched with Abel on a dating app last year, when I was doing some serious Tinder Swindling.

My strategy was chucking every message into Google translate and conning my Spanish matches into believing I could say more than ‘Una cereza por favour’.

Not the most ethical approach, but I was eager to meet people, having just moved alone to attend a Spanish language school in Granada from a sleepy seaside town occupied mainly by retired British expats

Dating apps in my previous home were a wasteland of toothless fisherman and Marbella playboys, each one providing more red flags than a Spanish bullfighter. Granada, in contrast, had an international cast as diverse as the COP26 summit with everyone from rugged ecowarriors to suave bilingual businessmen swiping right.

I was nervous to put my schoolgirl Spanish to the test yet I remember seeing Abel for the first time and knowing instantly, not necessarily that we would fall in love, but that we would have a lot of fun.

And we did, barrelling through wine, laughing at our clunky linguistic efforts. Having learned English as a teenager, Abel admitted he was scared he wouldn’t remember a word.

Luckily for us both, he did.

For my part, I didn’t pretend to be fluent or be something I was not.

I couldn’t hide behind my usual first date armour of wordplay and shared cultural references. For the first time in my romantic life, I just tried to be myself.

I reckon I understood 80% of his Spanish, but I had completely misunderstood how Abel felt about me.

I was certain that he was looking at me as a friend, not a potential partner.

Alone time, especially in the early stages of our relationship, was in short supply.

I knew I liked him but I was so flummoxed by our first handful of dates – beers with his sister, tapas with his flatmate, a camping trip with seven of his closest amigos – that I was afraid my lust had got lost in translation.

I misinterpreted all Abel’s attempts to win me over (Picture: Kirsty McKenzie)

The milestones of commitment we mark with romantic partners in the UK are pretty standard — but when it came to love, culturally, I had no clue what to expect in Spain.

Even when he casually suggested to me that he might travel 10 hours to see me one weekend, I assumed he was looking for adventure, not love.

As my friends at home in Scotland squealed and swooned at what they assured me was a major display of affection, I still felt confused.

Being so used to having people tell me how they feel, rather than showing it, I misinterpreted all Abel’s attempts to win me over.

Love might not be blind, but I certainly was.

Three months after meeting, he invited me to my first Spanish wedding, on the Almeria coast.

I didn’t understand a single word of the speeches but the clear emotion the bride and groom had for each other brought me to tears.

Very few people at the event spoke English and I was overwhelmed to meet his family while I was still struggling to string sentences together.

Inevitably, I regressed to a childlike state, smiling and waving, while offering one word answers.

But I never felt anything but warmth from them.

Everything about the wedding, from the rhythmic clapping to the roaring cheers of ‘Ole!’ to 4am embraces on the dancefloor made me long to be a part of this club.

Love and laughter and tradition and respect pulsed through his family like ocean waves unfurling, all I had to do was be brave enough to jump in.

That night Abel pulled me to the side and told me he loved me. ‘Te quiro a ti,’ I replied, sharing the same sentiments in his native tongue.

‘Were you nervous to tell me you loved me?’ I asked him later. ‘No,’ he laughed, a little smug. ‘Because I knew you would say it back.’

‘How did you know?’ He shrugged. ‘I don’t have the words, it was just a feeling.’

I think one of the great lies of love is that words are everything.

Of course we all hope for satisfying, tear-jerking, goosebump-raising rom-com worthy declarations, but reality isn’t always like movies.

Love can flourish in the quietest of moments, silently watching how your romantic partner interacts with you and the rest of the world.

Coffee brought to bed in the morning, cooking for friends, searching for their glance across the room at a party, a soothing squeeze of the hand when things don’t go to plan. An assurance, that goes beyond words in any language, that we are there for each other.

Byron Bay and hipster brunches: What it's like to road trip around NSW, Australia

There’s a quirk in the Spanish language that means the verb Amar, to love, is rarely used. ‘Te Amo’ is considered overly sentimental and saccharine, something only gushed by Hollywood stars on the silver screen.

‘Te Quiro’ is smaller, but more true. Translated literally, it means I want you. I prefer that, I think. To want someone is to choose them every day. I’ve learned to understand love, not as a passive verb, but as a million tiny actions that bind you together.

‘Love is action!’ host Davina told The Language of Love contestants. ‘The words you say in love are empty unless it’s followed by action. If you don’t show your love by actions, then loving words mean nothing.’

I couldn’t have put it better myself. In any language.

MORE : I found true love in Second Life and met my boyfriend in person for the first time after a year

One in ten dump their first dates if they get too competitive, says study


‘My boyfriend won’t let my travel dreams come true – what should I do?’