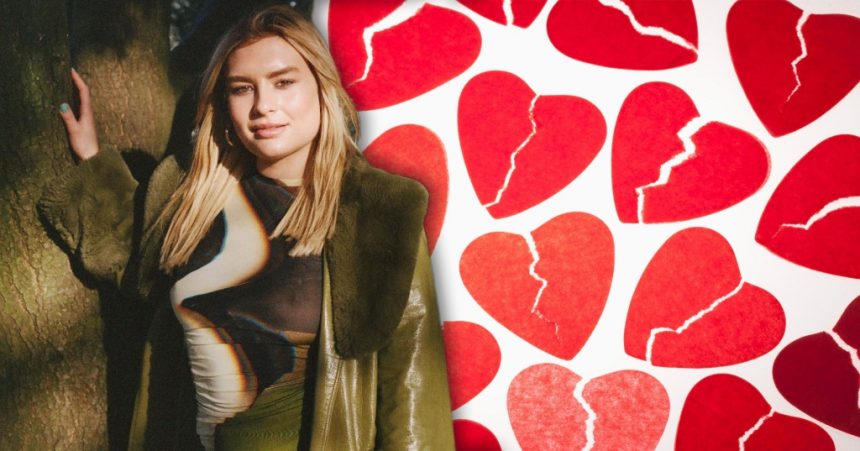 When Annie Lord was unceremoniously dumped by Joe, her boyfriend of five years, in the dying days of summer 2019, it seemed apt for the writer to put pen to paper.

‘I started writing him a long love letter,’ says Lord, 27. ‘When you go through something horrible, there’s no option but to focus on it and I was struggling to think, or write, about anything else.’

She didn’t end up sending the letter but she did write an article for Vice that provoked a lot of interest, gaining her an agent and  a dating column for Vogue.

Now she’s written a candid and compelling book called Notes On Heartbreak. Nothing is off limits, from bad dates and rebound  sex to the pain, intensity and self-indulgence of heartbreak.

‘I didn’t want it to feel like a self-help book, because the main thing you need when a relationship ends is time,’ she says, ‘but I want people to feel less alone in their emotions, to know if they’re crying in bed or ringing their ex up drunk that they’re seen and it’s all part of the healing process.’

As someone who has spent almost three years processing and exploring the sheer messiness of heartbreak, Lord shares her advice on how to overcome it.

Part with your dignity intact (if you can)

There are many things you can control in life but where you get dumped isn’t one of them.

For Lord, it was on the side of the road at King’s Cross station. At first, she thought her ex just wanted to move out of their flat. When the realisation dawned on her, she managed to utter, ‘Have a nice life’ and walk off. It was an exit worthy of applause.

‘I would like to take credit for it but I was so shocked, I didn’t know what to do,’ says Lord. ‘People say it’s awful he did it on the street but you can’t react, so in a way it was clean and I couldn’t embarrass myself.

‘I’m sure if it was in a bedroom I’d be crying and going mental but, wherever you are, take a breath if you can. There will be so much emotion, you won’t be able to make sense of what’s going on in that moment.’

Get out and about (Picture: Getty Images)

There’s nothing like putting mileage between you and an ex for some much-needed perspective. In Lord’s case, she hopped on a train back to Leeds to see her parents (‘because it feels like something a person who has just been dumped would do,’ she notes) but it could equally be friends or a solo trip somewhere quiet.

‘It’s good to have a break and to take the pressure off yourself when it’s so intense and brutal,’ she says.

‘Just sit in the pain of it. You can learn so much going over what happened but there will come a point when you need to stop psychoanalysing. It won’t be avoidance or not being in touch with your emotions but the realisation it doesn’t need to be an ongoing conversation. At that point, it’s done.’

In the words of Lord’s mum, ‘get it all  out’ – cry, cry, and cry some more. It’s not only cathartic but physically beneficial,  as Lord discovered  during her research into the scientific impact of heartbreak.

‘I looked into how a broken heart can actually make you physically ill [it’s called takotsubo cardiomyopathy], and that tears flush out [adrenocorticotropic] hormones, which cause high stress levels, so you feel calmer,’ she notes.

‘It was a way to add weight to the idea of “being dumped”, or “heartbreak”. They’re words we hear so often but it’s not overdramatic or silly to be in so much pain.’

You’re not the only one (Picture: Getty Images)

Call it tough love but it doesn’t hurt to remind yourself there will be millions of people feeling as terrible about being dumped as you do right now.

A tearful Lord was reminded of this when a sales assistant offered their two pennies’ worth during a bra fitting, of all things. ‘You feel like you’re going to die, don’t you?’ the woman said.

It was meant kindly but Lord’s tears turned to ire. How could she have the audacity to believe she understood the depth of Lord’s angst?

‘You want to believe what you’re feeling is completely unique because it hurts to know the pain you’re going through isn’t even remarkable,’ she explains. ‘It happens every day but you can’t believe it because it feels so intense.’

Put it away (Picture: Getty Images)

Not so long ago you didn’t have to worry about seeing an ex unless you were unlucky enough to bump into them. Now they (and their new life without you) are just a click away.

‘If your ex pops up on your social media you can get a huge endorphin rush just by seeing their face but a break-up is about breaking the habit of seeing and talking to that person, and stalking an ex on social media is never a good idea,’ says Lord.

‘Having said that, when I did see my ex with someone new (IRL), it wasn’t as bad as I thought it would be. You’re imagining this perfect relationship because social media is a highlight reel but realise they’re just like everyone else. It can also be the reality check you need to move on.’

See it as an opportunity (Picture: Getty Images / Image Source)

Advice can arrive from the most unexpected places. In Lord’s case, it was her hospitalised granny advising her to ‘have a fling’. Typically honest, Lord admits she tried to ‘build some kind of scaffolding of attention’, first by messaging the ‘nearly-sort-of-but-not-quite-men’ she knew, and later by going on dates.

‘I definitely had this need to feel seen and attractive,’ she reveals. ‘I probably started dating too soon as I was comparing every guy to my ex, or wasn’t really attracted to them, but it reminded me I could have fun and people wanted me.

‘The first time you have sex after a long-term relationship is exciting because it’s all new. You can also meet someone who isn’t meant to be long-term but they help you re-evaluate who you want to be.’

Tell yourself you will get over it

At the beginning of the book, Lord highlights the adage that it takes half the length of a relationship to get over it, and wishes she could fast-forward to 2022.

Now she’s here, she says: ‘I feel so good, so sure of myself. I’m surrounded by a really good group of friends and enjoy my work. Joe and I are in contact sporadically but I think it’s correct we broke up and I’ve accepted there were problems and issues.

‘It’s funny thinking how my life would’ve turned out if he hadn’t ended the relationship. I don’t think I would be sadder or happier if we hadn’t broken up, it would just be different.’

Notes On Heartbreak by Annie Lord (Trapeze) is out now.

MORE : Asking For A Friend: Should differing libidos be a relationship dealbreaker?