‘He just started crying and talking about his mother:’ People share their weirdest date stories 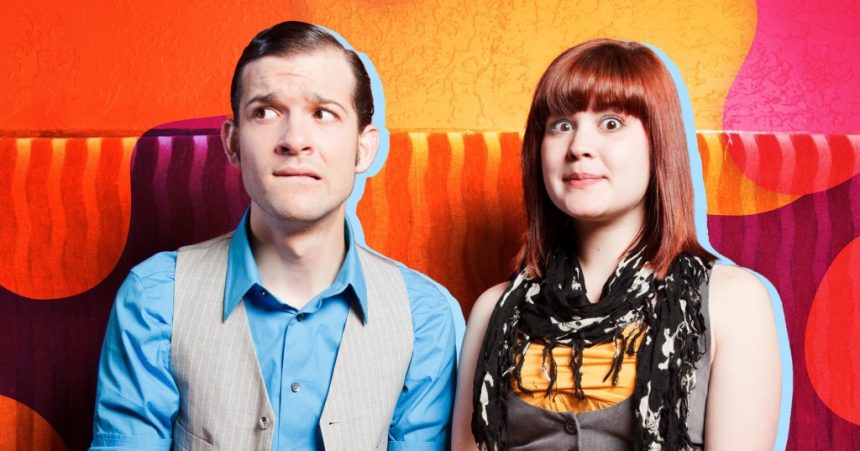 ’30 seconds is a long time when you have a stranger breathing deeply into your clavicle’ (Picture: Getty / metro.co.uk)

Dating is exciting because it presents myriad possibilities.

It’s one of those things that, on the one hand, has the capacity to change your life irrevocably for the better, or at least be the catalyst for some very good times.

On the other, the act of dating can also put you in one of the oddest situations of your life for the length of time it takes you to politely down a drink.

In honour of Kanye getting his beard trimmed in a restaurant on a recent date with Julia Fox, we wanted to hear more about the weird stuff.

From the funny to the downright creepy, here are some of the strangest things people say have ever happened to them on dates.

‘Went on a date, and she said she wouldn’t know if we were compatible until she smelt my “individual scent”.

‘I agreed out of unfettered surprise, hoping at most it might just be a quick sniff of my hair.

‘Alas, it was not. 30 seconds is a long time when you have a stranger breathing deeply into your clavicle.’

‘I once had a guy genuinely propose we do a dine and dash.

‘Someone else once grabbed my hair from the roots out of nowhere mid-conversation and then carried on like nothing had happened – until I yelled at him.

‘Another guy once left me for nearly an hour to take a call from his ex, then returned as the food arrived like nothing had happened. Again, I yelled at him, and then he told me I’m hot when I’m angry.

‘I should have thrown a drink over his head and stormed out Peggy Mitchell style.’

‘My date said he was “profiling me”. He was an ex-member of the USA military I went out with when I was visiting.’

‘In summer 2017, I happened to connect with a lovely woman on Tinder. What could go wrong, right?

‘When we finally decided to meet up in person, I planned a date we were supposed to go to a restaurant. I had called ahead to say it’s her birthday — it wasn’t, but they’d have surprised her with a little treat and a song, just for fun.

‘I picked her up from her house and walked her to my car passenger side, opened the door for her, and jogged back to the driver’s side. I looked over to the right and noticed she was not there anymore. Turns out she was looking under my car for whatever reason.

‘While we are on our way to Olive Garden she tells me: “Thank you for picking me up. I had you get me because two days ago I crashed my car into a pole because I was inebriated” — that right there was strike one and two.

‘Maybe five minutes later after she tells me that she has a sporadic moment of acting like she was going to jerk the steering wheel and unbuckle her seatbelt as if she’s about to jump out of the window. That turned me off.

‘Instead of going to Olive Garden, I told her: “Do you mind if we talk and walk around the mall?” We did one full circle around the mall while she talked the entire time. It was just so awkward.

‘After we left the mall it was pretty silent in the car ride back to her place. I told her good night, I enjoyed my time, texted her to say “thank you, hope you got home safe, I don’t think this is going to work out between you and me you’re a nice woman” and deleted the entire app when I got home.’

‘We were having drinks, and he asked if I wanted another. I said yes, thinking he was getting me another G&T. He came back with a glass of water. To this day I have no idea why.

‘I also went on a date once with a guy who, after about 20 minutes, just started crying on me and talking about his mother. It went on for hours. I didn’t know how to leave.’

‘The poor guy was driving me home from a lovely meal, I opened the car door and ended up falling all the way to my waist down a drain.

‘I felt like a complete damsel in distress screaming my head off, but he was such a gentleman and pulled me out, took me in his arms and washed the sewage off my legs.

‘It was a proper Bridget Jones moment – an evening to always remember, and he did actually ask me for a second date!’

‘I met him at work, but because I was a broke student, I invited him around mine.

‘He spent the entire time explaining Batman to me, before making me listen to the soundtrack to Dark Knight Rises song by song to “understand the nuance of each theme”. At one point, he lifted his shirt to reveal a huge, shoulder-to-shoulder length batman logo across his chest.

‘My housemates were listening upstairs crying with laughter (we were in the living room and were supposed to be watching a movie). They had been keeping tabs on me via text, but apparently, they thought I was on to a winner at one point because they heard me scream “OH WOW” and thought I’d pulled… But it was just my reaction to the tattoo.

‘They eventually came in and saved me after like an hour and a half.

‘I never saw him again.’

US woman raises £46,500 for elderly food delivery man to help him retire

A third of Brits over 50 are having the best sex of their lives, study says

‘On mine and my partner’s first date, neither of us planned ahead, so we went to get fish and chips from a place that only took cash.

*Name has been changed.

MORE : Woman’s dating app match creepily tracks her down on LinkedIn – here’s what to do if it happens to you

MORE : Woman marries the colour pink – after dating it for 40 years

How to embrace ‘reincardating’, the ultimate dating vibe of the year