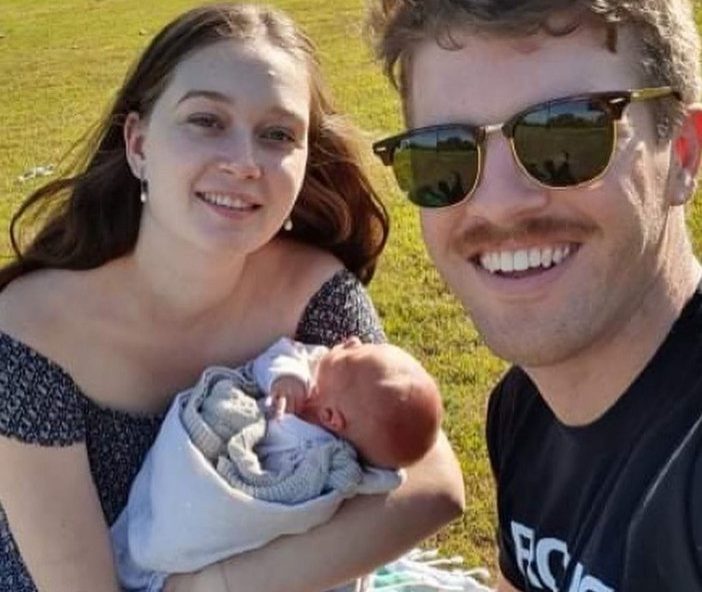 Max Silvy, 25, has been hailed as ‘man of the year’ after he supported a woman giving birth – while on a Tinder date.

Max and Alyssa Hodges, 20, were only on their fourth date when Alyssa went into labour – but Max was unfazed and stepped in to support her through the birth of Ollie in September last year.

Alyssa had been due to pick the civil servant up from the airport when her water broke at eight months.

However, she had to meet him in the hospital instead, where she gave birth with Max by her side.

The couple say the unlikely circumstances of their relationship has ‘bonded’ them, as Max was supporting Alyssa during the early weeks of motherhood when she had the ‘baby blues’. They now plan to move-in together.

Although their families were initially apprehensive about the relationship developing at such an intense time, both sides have now given their blessings to the couple.

Alyssa, from Brisbane, Australia, said: ‘I was about six and a half months pregnant when I went on Tinder, and I clearly stated that on my bio.

‘I didn’t want to lead anyone on, so I was being open and honest. I wanted them to know what they were getting into right off the bat.

‘Max travels a lot for work so we’d only seen each other three times before he ended up coming to my birth.

‘On the day I went into labour, I was meant to be picking Max up from the airport as he was coming back from a work trip.

‘That was the plan, but I ended up texting him saying ‘I’m so sorry, you’ll have to get a taxi. I’m going into labour.’

Sorry, the video was not found

Unfazed, Max jumped into a taxi to be there for Alyssa’s labour, which lasted about a week ‘on and off’.

‘I’d be sent home and come back into the hospital for a period of four to five days,’ said Alyssa. ‘I was contracting for those days and Max was with me the whole time. The birth itself was about seven hours.’

To help Alyssa find her feet, Max took time off work to be with her as she cared for her newborn.

The new mum said: ‘We both knew that we liked each other and had strong feelings for each other. But the birth was the peaking point of our relationship, it bonded us.

‘Looking back, I know it was the best decision ever. I’m so glad he was there.

‘Motherhood is a big adjustment for anybody, especially with me being younger. But Max taking a week off from work really helped.’

For Max, Alyssa’s pregnancy was not an issue to him, although he admits that being there for the birth made him ‘anxious’.

The labour lasted about a week all in, and Max was there with Alyssa for every minute of it (Picture: Kennedy News and Media)

Max said: ‘There was something that caught my eye about Alyssa. Normally I wouldn’t swipe right on a pregnant girl, but there was just something about her.

‘I wouldn’t say the experience was overwhelming but I was anxious. I hadn’t prepared mentally the way Alyssa had, so coming in late [like I did] was a rapid process.

‘Anxiety was the biggest thing. There were so many unknowns, so many things that I didn’t know about becoming a dad.

‘There’s a lot of learning that comes with being a new dad, but me and Ollie are bonding quite well.’

Alyssa says her mum – who was intermittently at the hospital with them too – was initially unsure about the idea of Max being her birthing partner, urging her to be cautious

Should you send a thank you email after a job interview?

‘She didn’t understand why anybody would want to be with someone who was pregnant and take such a big responsibility on,’ said Alyssa.

She added: ‘She told me I needed to think carefully about it. But at the same time, she was saying Max was a lovely guy and she hoped it’d work out for us.’

Since sharing their story on TikTok, the couple have been inundated with comments from women demanding to know how Alyssa found a man like Max.

‘Everybody is asking if Max has a brother, calling him “man of the year” and saying we were the cutest little family. It was a great reaction,’ said Alyssa

Since having Ollie, the couple have been raising him together with plans to move in together in the near future.

Alyssa said: ‘We only lived 20 minutes apart so we’d take turns being at each other’s houses.

‘Ollie loves Max so much. There’ll be times where he won’t want me, he’ll want Max. He’ll be crying and the minute Max takes him, he’s happy and smiling.

‘Max is definitely the favourite.’