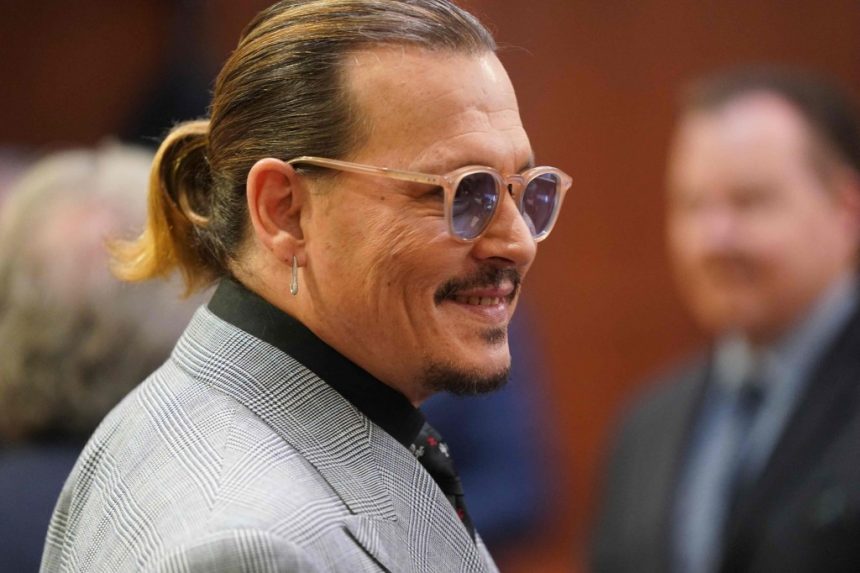 Depp has had some high-profile relationships (Picture: SHAWN THEW/POOL/AFP via Getty)

For the past few weeks, all eyes have been on the Fairfax County Courthouse in Virginia, where actor Johnny Depp and his ex-wife, actress Amber Heard, have been engaged in an explosive legal battle.

Depp, 58, sued his ex-wife for $50million (£40m), claiming that a 2018 article she wrote for The Washington Post about her experience with domestic abuse, suggested that he was physically and sexually abusive towards her during their marriage. Heard later filed a countersuit against him for $100m (£80.3m).

Depp and Heard have both taken to the stand, as well as various witnesses and experts – with one of Depp’s exes set to testify tomorrow.

The news has caused many to wonder who Depp has dated in the past – and who he has been married to.

Who has Johnny Depp dated and been married to?

Lori Anne was Depp’s first wife, with the couple marrying on December 20, 1983.

She is a makeup artist, who has worked with Adam Ant and Christina Applegate, as well as having a company called Serendipity Lip Glosses.

Johnny Depp and Jennifer Grey were rumoured to be together in the late ’80s (Picture: Vinnie Zuffante/Getty Images)

Dirty Dancing and Ferris Bueller’s Day Off actress Jennifer Grey are rumoured to have been in a relationship around 1989.

Reports at the time hinted that they were engaged, but this has never been officially confirmed.

Depp was also linked to Sherilyn Fenn, who starred on Twin Peaks.

She calls the actor her ‘first love; and says she knows him ‘as a hiuman not a movie star’.

Their relationship lasted several years during the 1980s, and she is now married to someone else and a mother of two.

In 1990, Depp proposed to his Edward Scissorhands co-star Winona Ryder.

At this time he got his infamous ‘Winona Forever’ tattoo, which he later got changed to ‘Wino Forever’.

Depp and Moss dated in the 1990s (Picture: Magma Agency/WireImage)

One of the ‘it’ couples of the 1990s were Johnny Depp and Kate Moss.

They met in 1994 when he was 31 and she was 20, and their four-year relationship was notoriously fiery.

Moss, now 48, is set to testify in the Depp and Heard trial tomorrow after Amber alluded to an alleged domestic violence incident between the pair back when they were dating.

Johnny and Vanessa have two children (Photo by Tony Barson/WireImage)

That same year his relationship with Moss ended, Depp met model Vanessa, when they were filming The Ninth Gate.

They went on to be together for around 14 years before separating in 2012.

The couple have two children together – Lily-Rose and John.

Depp and Amber Heard met on the set of The Rum Diary (Picture: Getty)

Johnny Depp and Amber Heard were married on February 3, 2015 in Los Angeles.

The pair met on the set of the movie The Rum Diary in 2009, and began living together the following year.

However, the marriage proved short-lived, with Heard filing for divorce the following year and filing for a temporary restraining order.

After having met in 2017, Depp and dancer Polina Glen became official in 2019 following his divorce with Heard.

However, reports suggest that the public pressure of their relationship became too much for Polina to handle, causing her to break off the relationship and return to Russia.

Depp was rumoured to have dated Made in Chelsea star Sophie Hermann in 2020.

They were reportedly spotted together at The Corinthia hotel in London in September of that year.

MORE : Johnny Depp bemused as Amber Heard witness Dr David Spiegel is grilled on analysing him in Pirates of the Caribbean rather than real life


How to flirt: Tips from an expert to get you started or improve your game